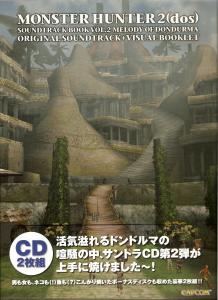 The first soundtrack opens with the orchestral main theme for Monster Hunter 2 composed by Masato Kouda. It is based on the melody from the original Monster Hunter, but the shape of the melody is made more elaborate and dynamic, especially with the triplet and intervallic leap characterising its dramatic peak. Its exposition is even more cinematic than the original main theme and listeners are taken on an emotional rollercoaster. A serene introduction gives way to a percussive action section, a spiritual interlude, a dramatic build-up, and finally a triumphant coda. Like its predecessor, there are multiple arrangements of the main theme, but they're more creative and better integrated into the soundtrack this time. Whether heard in the exciting march "To the Hunting Ground" to the gliding fanfare "Praising Success", the melody is always a joy to hear. At the end of the first soundtrack, "Hunter, Go Forth" opens with a colourful orchestration of the main theme and moves into a stunning vocal arrangement in the third minute. The shape of the melody lends itself so well to the vocals and Ikuko Noguchi's ethnic-inspired performance is rich and expressive. The song is impressively arranged in "Soul Carried in Song", "Song Sung to the Spirits", and "Life Sacrificed to Song" for iconic scenes later in the game. It also receives a definitive reprise at the end of the second soundtrack in "Song of Beginning".

The two major town themes of Monster Hunter 2 are central to each volume of the soundtrack. Song of Jumbo's "Village of Deeply Blessed People" demonstrates Kouda's ability to create beautiful pastoral themes with memorable woodwind melodies and acoustic guitar support. The theme receives straightforward arrangements in "The Wind of the Village's Water Wheel" and "Under the Starry Night" to enhance the interactivity of the gameplay. However, only the bubbly country dance arrangement "The Great Harvest Festival in the Village" particularly justifies its length playtime. The central track on the second volume, "Bustle of Dondurma", offers an more ethnically-influenced main melody and rougher percussion. It's arranged more creatively in the jubilant "Prosperous Market" and melancholic "Path of a Moonlit Night". The rural feel is maintained with a pleasant reprise of the main theme in "Invtiation to Town" and the thematically continuous relaxation themes "A Moment's Peace", "Peaceful Moment", and "Splendid Life". For the lighter side of life, there are also merry jigs ("Happily Serving Alcohol"), country parodies ("Wandering Gunfighter"), and flamenco-influenced goodness ("Drunken Thoughts At Midnight"). Some of these pieces will be a select taste, but the depiction of country life is very convincing. There are also some ridiculous fanfares for the various mini-games plus cat scat makes a surprise appearance.

The landscapes of Monster Hunter 2 are accompanied by very subdued pieces that seamlessly add ambience to the game. "The Fresh Green Earth", for instance, uses earthy percussion and a spiritual chorus to enhance exploration of lush prehistoric landscapes. "Stillness of the Marsh" features little more than a repeating xylophone motif and some ethnic woodwind wails in addition to moody sound effects. Perhaps the most explicit depictions of setting are "Dunes of Midnight Sun" with its Arabian instrumentation and tonality or "Rocky Mountain of Blazing Fire" with its brooding fiery percussion. There are actually two different themes for day and night, but there are continuous elements between them; in "World of Snow", for instance, the rare melody and supporting percussion remains the same but the lead instrument is trumpet by day, cor anglais by night. While all themes demonstrate competence at supporting landscapes and creativity using ethnic music, they're all regretfully underdeveloped presumably at the request of the developers. Furthermore, most themes receive less than 30 seconds playtime on the soundtrack — an exception being the tense "Town of Ruin" themes before the climax — and no loop. If they were extended, they could have fulfilled their potential to be among the greatest pieces of ambient video game music. As they stand, they feel like filler on the albums.

And now for some action! Much like Monster Hunter's battle themes, "Roar of the Marshlands Strange Beast ~ Gerio" creates drama and dynamism with its driving motifs, rasping brass solos, and enigmatic development sections. The assembly is even more crisply and competently executed than before. "The Black Shadow Dancing in the Storm ~ Kushaldaora" focuses on depicting the enemy with malevolent brass shrills and harshly punctuated bass, but still manages to incorporate some dazzling motivating sections. There are also action themes showing world music influences, such as the absolutely infectious "Queen of the Blazing Kingdom ~ Teo Teskator & Nana Teskatori" and the "Assassin Sent to the Burning Sand" with its Arabian melodies and instrumentation. Some other enjoyable action themes are those that integrate the main theme, namely "Old Mountain Dragon", "Dweller in the Frosty Dark ~ Dodobrango", and "Challenge of the Powerful Enemy ~ Shen Gaoren". Another testament to its excellent craftmanship, the theme fits so well in these arrangements. Among the less impressive action themes, "Ruler of the Volcano ~ Gravimos" and "Charge of the Menacing Dragon" drag due to their low tempos and reliance on basso ostinati. The last three battle themes featured in the second soundtrack give displays of creativity, melodious, and downright power. There's also an epic secret battle theme too.

Now most of Monster Hunter 2 has been discussed, the bonus discs of the soundtrack books feature music from Monster Hunter Freedom. As the game was a PSP port of Monster Hunter G, it mainly reused the music from the original Monster Hunter, though around 35 minutes of new music was composed spread across the two discs. While quite varied, the pieces tend to be based on existing approaches to the series' music and offer little new stylistically or thematically. There is emphasis on the rustic instrumentation of the franchise with "A Day in a Rural Village", "Desiring Fame in the Land of Beasts", and "Village Elders' Journey". There are also two killer action themes, "Howl of the Lone Wolf" and "Night of Lonely Contemplation", that rival the best of the Monster Hunter 2 battle themes. Many will reminisce about the original with the soft flute and guitar interpretations of its main theme in "Thoughts of the Land" and "Illusion of the Dense Forest". There are a lot of lighter pieces too, such as "Cute Ailu" with its catchy fiddle melody and tuba support or "Big Juicy Cat Tactics!" with its banjo use and ridiculous heavy accompaniment. By far the most numerous themes, though, are short silly interpretations of mini-game themes and fanfares heard in the original game. 14 of the total 27 themes are less than 20 seconds long and mostly clustered together on the second volume. People will find them either cute or annoying, but they're certainly skippable regardless.

The score for Monster Hunter 2 maintains the successful approach of its predecessor while being bigger and better than before. The albums nevertheless have big issues with their presentation. It's very unfortunate that the potentially remarkable setting themes have been relegated to underdeveloped filler tracks while some of the town themes receive over six minute playtimes. Furthermore, there are a lot more short and superfluous tracks here than the original. The decision to split the soundtrack into two volumes reduces the coherency of the presentation and also significantly increases the price of owning the complete set; a three disc soundtrack featuring two hours of Monster Hunter 2 and a bonus disc with the additional material from Monster Hunter Freedom would have been more appropriate. The score itself deserves a firm nod for its high production values and is still enjoyable to listen to. However, it's probably better to stick to the Monster Hunter Hunting Collection ~3rd Anniversary Best Track~ as far as album releases go.

Comes in A4 hardback book featuring full colour artwork and brief comments on each of the tracks.
Album was composed by Акихито Нарита / Hajime Hyakkoku / Масато Кода / Синя Окада / Юко Комияма and was released on May 31, 2006. Soundtrack consists of 48 tracks tracks with duration over more than hour. Album was released by Suleputer.