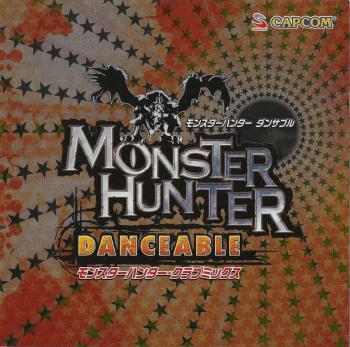 In the last few years, there has been an influx of remix albums dedicated to franchises that didn't necessarily need them: Final Fantasy, Mega Man, Gradius, Dragon Quest, and now Monster Hunter. Following the moderate reception of his tributes on live DJ sets and the Monster Hunter 5th Anniversary Monhan Ongakubu album, Japanese DJ Kosaka Daimaou was asked to create a whole album of Monster Hunter remixes. The resultant album isn't necessarily badly remixed, but often sounds ridiculous given the discrepancy between the orchestral source material and club remix style.

The main problem with this album is that the source material is poorly suited for club remixes. There are remixes of the main themes for Monster Hunter 3 on "LIFE", Monster Hunter 2 on "Xian Gao Ren", and Monster Hunter on "One Day, Before The Last Battle". In each case, the rich fanfare-like melodies are delightful and take a clear focus in the remixes. As for the electronic elements, they're technically well done with well-punctuated samples, danceable rhythms, and emotional interludes. It's just a pity that the two elements sound completely awkward together, despite the best efforts of the arranger. Monster Hunter's remix sounds especially contrived with its ethnic-tinged interpretation here, while Monster Hunter 3 is one of those cringe-worthy super-happy trance remixes featured across Tokyo clubs. It's just like the remix of Dragon Quest's "Overture" all over again...

That said, the album is far from uncreative and it is evident that the DJ has put an incredible amount of effort into offering a diverse and impacting set of remixes. Sometimes the results are spectacular when Diamaou interprets the ideal source material. For example, he translates the rhythmical focus of the original Lioleus effectively on to a club remix. What's more, the blend of orchestral and electronic elements offered, while jarring, creates an incredible amount of energy. The same applies to the battle themes featured "Where is a NINJA?" and "Kushala Daora in Space". The soundscapes of each of these remixes is further boostered by and thick, spacey samples in the latter. They're pretty hardcore, yet entirely listenable too thanks to their memorable melodies. "Last of O-DORA" is great too. Quite unlike the main theme remixes, it is perfectly possible and respectable to dance to all of these.

There are plenty of other interesting tracks on the album, but the majority are unsuccessful. "JO-ZU" fits Tri's cooking theme well and there are interesting creative choices, such as the focus on vocal samples and the extended overdriven guitar solo. That doesn't prevent it from being incredibly repetitive and annoying, though. The ethnic-tinged "Prince of MOGA" is another remix that held great promise, but is ruined by overuse of vocal themes. "Ocean! Land! 8biiiiiit!!" also takes a cutesy approach using, surprisingly, a battle theme as source material. Sadly, however, it isn't a fully-fleshed retro remix and instead just intersperses some annoying beepy sounds and the occasional 8-bit fanfare into a big mess. The closing bonus remix of Monster Hunter Frontier's Snowy Village also relies excessively on screechy novelty samples and overly heavy bass beats resulting in something quite unlistenable.

With eleven tracks and just four keepers, the Monster Hunter Danceable Club Mix is clearly not a good album. Kosaka Daimaou deserves props for his creative approaches and booming battle theme arrangements. However, his remixes generally interpret unsuitable original material and take an overly bombastic approach. It would be excellent to see a slightly more restrained Kosaka Diamaou approach another remix album with better-suited material. No, not Resident Evil, Suikoden, or Wizardry. How about Ridge Racer, Street Fighter, or Raiden instead?