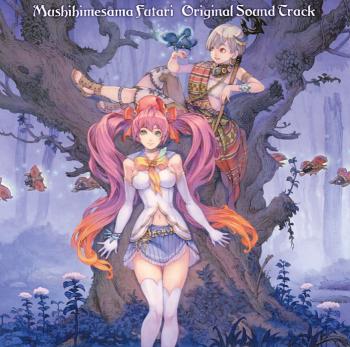 Manabu Namiki is quickly rising to the top as one of my favorite composers. This album is what started it all. I had never listened to a soundtrack for a shmup before, but once I heard this, I was hooked. The Mushihimesama series has quite an odd theme. It takes place in an insect kingdom. I'm not sure of the actual story behind this addition to the series though. What I can say, though, is that Manabu Namiki and Kimihiro Abe have created what I believe to be a shmup masterpiece here, and I'm going to pull it apart for you!

This first stage theme "Setting Off Together" is one of my favorites from Namiki. While it does borrow the intro from the first stage in the first game, that doesn't take from its originality at all. A very heavy, electronic beat carries us through this track, with more electronica on the melody. With the setting of this game in an insect's world, this piece really brings that out. The boss theme of this game, "Beastial Beat", features no real melodic direction, but fits in the game perfectly. The rave style beat mixed with the random electronic sounds does an outstanding job keeping your blood pumping! It needs to be too with all those bullets on the screen! I couldn't have asked for a better boss theme.

With "Sea of Frozen Crystals", we get introduced to Kimihiro Abe and what an intro for him. The track has somewhat of an Asian flair in the harmony and is more melodic than the others, but slips right in to the electronic standard Namiki has already set the stage for. Overall, I believe the pairing of these two composers was an excellent idea! Another treat, "Is Shinju in the Forest Rebel Army?" begins with a solo drum beat, and strides forward into a much smoother melody than the previous pieces. A bit dry compared to the other stage themes, but still a wonderful addition to the stage lineup! I was not expecting "The Beast King Clad in Black Armor". It's another smooth piece, but this one is different. It somehow pulls the melody, as faint as it is, to the forefront. This allows the flute and other lead instruments to shine without being overbearing as in other electronic pieces. The title doesn't do this one justice at all.

The final stage theme "On the Verge of Madness" has somewhat of a eurobeat feel to it, at least in the intro. I can't tell what instrument is playing the melody here, but it is of Asian influence (the one stringed instrument featured in all Twelve Girls Band pieces, that's it!). Towards the middle of the piece, the serenity that was felt in the beginning fades away, and the chord progression takes a turn in the minor direction, letting you know you are close to something big (hint hint). Get ready, its time. The final boss is here! In "Cry! Roar!!", Namiki steals the intro from the first game, just like in the first stage theme. After that, though, the piece goes insane to reflect one of the hardest bosses in shmup history. Distorted vocals and a techno beat take us into yet another intro, which is then followed by a mish-mash of choir ahhs, the techno beat, and what seems to be a synth electric guitar. The section after this is what really gets me though. The rhythm of the piece changes and the electronic beat takes the forefront, giving a sinister urgency.

"Sky of Scented Souls" is an unexpected serene piece led by a violin. A piano takes the harmonic role here, leading to something that I wouldn't have thought to hear on this album. While it has a beautiful sound, and really sets the mood for what could be happening here, I just feel like it's out of place. Another contribution by Abe, the ending theme "Something Unseen and Warm" boasts one of the most beautiful piano melodies I have heard in a long time. Take that and top it off with an epic orchestral harmony and you have one of the finest pieces on this album. Anyone unsure of Abe's talent needs to give this track a listen. It should assure your faith in his ability to write a touching theme. Finally, the image song doesn;'t endear me. This one has some nice instrumentation, but the vocalist is just annoying. The music playing in this song does a splendid job of painting a picture of the insect world that is the setting of this game, though.

While I have been thoroughly impressed with Namiki thus far, this album has risen the bar for me. Until just a few days ago from this writing, this would have been considered my favorite album of his. Let's not derail this though. Namiki is an incredible composer with a unique and diverse palette of sounds that I haven't found in another shmup composer yet. Oh, we can't forget about Abe either! His works on this album have shown me he needs to compose for more games in this genre. Between him and Namiki, they could rule the world (well, musically at least)! Yes, anyone a fan of Namiki or shmup albums in general should have a great time listening to this album. I know I did.

Executive Producer: Kenichi Takano
Album was composed by Кимихиро Абэ / Манабу Намики / Natsuko Naitou and was released on May 07, 2007. Soundtrack consists of 17 tracks tracks with duration over about 45 minutes. Album was released by Cave.