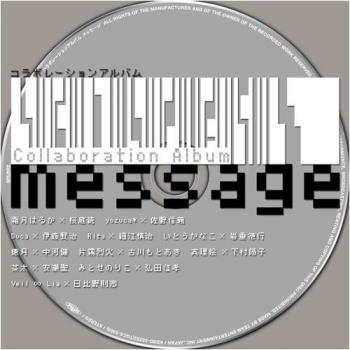 Collaboration albums are very rare these days outside of arranged albums that feature multiple composers. Even rarer are collaboration albums that feature original work from a multitude of industry video game musicians. In Message, many industry greats come together to craft a vocal themed album, with each track conveying its own message. Where else will you find an album that features RPG titans, such as Motoi Sakuraba and Yoko Shimomura, and electronica masters, such as Shinji Hosoe and Nobuyoshi Sano, all in one place, creating original works for the world to hear? Let's take a listen and see what my overall message is.

The album starts and finishes in a dramatic mood. The opening piece, "image ~shinzou~," composed by Motoi Sakuraba, features Haruka Shimotsuki on vocals. Featuring delicate piano, harp, and string work, the verses of this piece help to craft a very beautiful melody, while the chorus, which features a more dynamic contrast with the addition of the brass, creates a piece that creates an ever growing sense of drama. The vocal layering works wonders when it is used and Shimotsuki's voice was just made for this piece. It ends on a more delicate note, but the intensity within the opening and close are a very nice way to start the album. On a similar note, the last song on the album, "Silent Message," composed by Norihiko Hibino with Veil∞Lia on vocals, starts out just as delicately. Pizzicato harp and a beautiful string melody open the piece as it moves into a very ethereal section that focuses solely on the strength of the vocalist's voice. As this section progresses, some more instruments, such as brass, are used to accent and heighten the chorus. The instrumental accompaniment is absolutely stunning and the vocalist's voice only gets stronger as it progresses. From there, a similar intensity like that found in "image ~shinzou~" can be heard. However, instead of using classical instruments, Hibino opts for a very intense electronica section that is just brim full of energy. It's a strange bridge between the verses, but it somehow works. When the vocalist returns, she starts with a spoken word section with the melody of the chorus subtly played by the strings and brass. The next verse uses a string accompaniment not heard prior in the track and works quite nicely. The piece ends with a dramatic return of the chorus and Lia's voice as strong as it's heard on the song before returning to the delicate pizzicato harp and string melody heard as the piece opened.

When I think of Nobuyoshi Sano, Shinji Hosoe, or Motoaki Furukawa, I do not think of composers with a forte in vocal themes. Do they disappoint? Not at all! "I kotoba," composed by Nobuyoshi Sano, features yozuca* on vocals and is a very bubbly synth piece. The choice of synth is interesting and the use of piano in a jazzy fashion contrasts quite nicely with it. While it doesn't have as much diversity in the album as some of the other pieces, it makes up with a strong melody. Given that Sano is probably one of my least favorite composers, I was extremely impressed by his offering on this album. Motoaki Furukawa's contribution "Young Etranger" features Rekka Katakiri and is also a bouncy piece. While I much prefer Rekka's voice on Yoshitaka Hirota's Kinema in the Hall album, I think it fits well with Furukawa's choice of instruments. The piano and rock elements of this piece work quite nicely and the string sections used to bridge the verses are a nice touch and the electric guitar solo is a nice way to climax the piece. It's a catchy piece, but one of the weaker ones on the album. The last electronic piece, "Weekend chocolat blanc," is composed by Shinji Hosoe and features Rita on vocals. This is easily one of my favorites on the album. As with the others, this piece is quite bubbly as well, but it's also the catchiest on the entire album. The layering of the different synths, combined with Rita's kawaii voice, make for a very hypnotizing piece. In addition, the chorus is fantastic and is followed by an awesome synth solo. I also like the use of the vocals that almost serve as backup singers to the melody. It's a fantastic addition to the album.

There are also a couple ballads on the album. "Melody," composed by Kenji Ito and sung by Duca, is one of the most beautiful things he has composed this year. Duca, hands down, is the strongest vocalist on this album. Her voice carries certain strength, yet at the same time, a certain delicacy that just fits harmoniously with Kenji Ito's piano and string ballad. The melody is extremely strong and the instrumentation, while clichéd in vocal themes, is extremely effective in helping to achieve such a beautiful effect. The other ballad, "Weep," is composed by Hijiri Anze and sung by Chata. This is the closest piece to modern J-pop on the album. It features a beautiful mix of drums, strings, and piano, and while I remember Chata's voice as kawaii from Shimomura's murmur album, here it is "normal" or what I'd expect from a J-pop vocalist at least. The melody is extremely beautiful, but the star of the song is easily the chorus. That section of the piece is just the icing on the cake as it builds up to create a perfect climax to the rest of the song.

There are also songs on the album that feature styles that are the strengths of the composers involved. "Angelic," composed by Noriyuki Iwadare and sung by Kanako Ito, features the composer's signature jazz style. This is an extremely catchy piece with some excellent saxophone work. In fact, it ranks up there as some of the catchiest on the album. There is this certain playfulness in the melody and Ito's voice, that when coupled with the saxophone and keyboard accents, helps to craft this extremely happy feeling. While I would have liked to hear an awesome saxophone solo, I'll take the nice instrumental section, as it did fit the style of the song a bit more. While Iwadare has lost his touch over the years, I'm glad to see he can still have some fun! "Carried by your voice," composed by Ken Nakagawa and sung by Yuduki, just screams Gust Sound Team. Starting off with some nice wind chimes and flute work, it quickly moves into a piano ballad very reminiscent of the music found in the Atelier Iris and Mana Khemia series. As the track progresses, some exotic percussion is added to the piano. This is probably a good thing though because it helps the piece from becoming stale. It's not the most creative thing in the world, but it's a nice piece. Last in this group is Yoshitaka Hirota, accompanied by Noriko Mitose. "One-Winged Bird," is definitely a tribute to his Shadow Hearts work. Just like his battle themes, Hirota employs a fantastic layering in his music that, when heard together, just creates this aural bliss. From the opening of the piece, you know that you are in for a treat. The chanting, the deep electronica in the bass, and the exotic almost Arabian sections, all with Mitose's voice over top, creates this hodgepodge of wonder. The melody is fantastic, the mixing is fantastic, and it really makes me wish that Hirota would compose more! I really miss this Hirota and it's clear that Hirota wants to let people know his creative side is still around!

I've decided to save Yoko Shimomura's contribution for last, as I find it to be the best thing on the album surprisingly. "Moon," featuring Marie on vocals, throws away her Kingdom Hearts persona, and pretty much any other persona she's ever taken on, and goes for an "in-your-face" Spanish piece. I could rave about how well Marie's voice complements the music, but that would just be moot. The real star is easily the instrumental accompaniment. There is just this driving energy found throughout. Flamenco guitar, violin, accordion, and drums help craft an extremely effective piece of music. Whether it's the melody itself, or the how well the violin is implemented throughout the piece, I really can't find a flaw with this piece of music. It doesn't help that the flamenco guitar solo is followed by a violin and flamenco guitar duet. All I can say is that I honestly think that Shimomura has been revitalized and has broken away from her "cutesy" Kingdom Hearts style, probably thanks to her dark contributions for Final Fantasy Versus XIII. Please Shimomura, please continue to be this awesome.

Message is easily my favorite original work of the year. It features a variety of styles, a ton of industry heavyweights, and some awesome vocalists. You'll find extremely bubbly synth pieces, some jazz, some ballads, some ethnic inspired pieces, and some dramatic pieces. While not all the vocalists are as strong as others, their voices fit in the context of the instrumentation used and some even surprised me! This is easily worth the purchase as each song is extremely enjoyable and it's something that's not done often. My only wish is that if there is another collaborative vocal album that Yasunori Mitsuda and some other industry titans, such as Nobuo Uematsu, are given a chance to work on it. It would have only made the album stronger in my opinion.