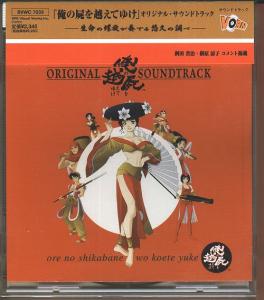 Ore no Shikabane wo Koete Yuke (which roughly translates to Over My Dead Body) is a role-playing game that tells the story of successive generations of a family cursed with rapid ageing. While the game is almost completely unknown in the West, it became a cult hit in Japan and received a largely successful soundtrack release.

Given the premise of the game, there are a range of compositions on the album with a tragic tone. Take, for instance, the four themes to represent the different seasons of the capital. The tracks reflect stereotypical features of the seasons — from the mellow green tones of spring to the dense snowy textures of winter — while incorporating a common melody. However, both the shape of the melody and the nature of the arrangements is such that overwhelming sadness, with a lingering hope, is conveyed. Other tracks, such as "Kitsuto's Theme", "A Hundred Demons", and "Scene of Carnage", have a more elegaic feel; they presumably work fittingly in context and are quite emotional outside it despite their stereotypical nature.

Despite the dark focus, there is plenty of diversity through the soundtrack. Given the ancient nature of the curse, there are also some compositions featuring traditional Japanese music, from the foreboding "Torii's Palace", to the soothing "Elegance". There are plenty of lighter moments provided throughout the soundtrack, such as "Inspiration" with its light poppy melodies and "Itsuka's Theme" with its upbeat saxophone line; though pretty generic, these tracks provide some welcome solace from the darker tones of the soundtrack. Even "Struggle to the Death" and "Decisive Battle" are surprisingly upbeat with its old-school guitar parts, demonstrating how the family eventually overcome the curse.

The vocal theme of the soundtrack, "Flower", is the most inspired addition to the soundtrack. The game's composer Ryoko Kihara was personally responsible for the vocals and she offers a beautiful tone above the worldly instrumentation. The chorus is particularly memorable here with its desperate tear jerking cries to overcome the curse. The composition was so popular that it was even featured on Press Start 2009: Symphony of Games. The track also receives several instrumental arrangements during the soundtrack, the most beautiful of which is "Flowers, Resolve". This track blends all the excellent features of the soundtrack — rich bittersweet melodies, traditional music influences, and hopeful undertones — into a single memorable anthem. The soundtrack ends with a brief drama performance.

Overall, the music for Ore no Shikabane wo Koete Yuke suitably complements the game with its personal and worldly tones. With a few exceptions, the majority of the tracks do tend to be quite derivative here and there are only a handful of especially memorable or remarkable tracks, foremost among them being the vocal theme. The soundtrack is far from a must-have addition to a collection, just a likeable experience for those looking for something new.