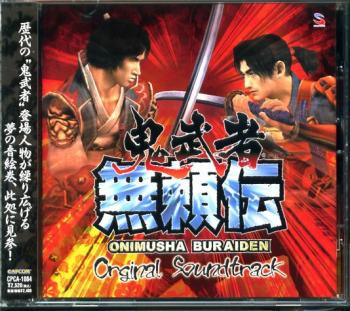 Onimusha: Blade Warriors, released in Japan as Onimusha Buraiden, is a multiplayer fighting spinoff of Capcom's successful Onimusha series. Capcom outsourced entirely to external talent for the soundtrack. The majority of the soundtrack is composed by Shinichiro Sato, a T's Music veteran also known for Dino Crisis 3 and Devil May Cry 4. However, a number of Sega veterans also make some surprising appearances, for as-yet-unexplained reasons. The team collectively maintain the blend of orchestral and traditional Japanese influences that the Onimusha series has become known for, while adapting the series' music for a brawling arena.

The main theme for Onimusha: Blade Warriors is introduced in "The Beginning..." This track is highly reminiscent of earlier main themes in the Onimusha series with its march-like thrust, cinematic features, and Eastern infusions. Traditional Japanese instruments are featured throughout the piece, but their use — whether the wailing shakuhachi or background koto — generally sounds stereotypical and obligatory. Some rock elements are also scattered throughout the track, most notably at the intense conclusion; this feature will be tacky for those expecting art music from the Onimusha series, though it is nevertheless an interesting 'nod' to the tradition of fighting soundtracks. The main melody itself certainly has the courageous and pensive quality necessary to portray the mind of a samurai, though it also feels heavily inspired by Hollywood tradition.

Most of the soundtrack is dominated by the stage themes used during brawling. Most tend to be effective at fitting the scenery and portraying the action, but few are interesting as stand-alone listening. Take, for instance, the theme for "Fog Valley". Like most Onimusha action themes, the track features bold string and brass leads, driving militaristic percussion, and some Asian infusions. However, the focal ideas are quite weak and, rather than offer an extensive and expressive melody like Hideyuki Fukasawa might, Sato simply switches between two rather generic crisis motifs. This feature, also present in tracks such as "Bamboo Thicket", "Blazing Up", and "Castle Tower", is what makes the tracks simply serviceable, rather than exciting or addictive. There are occasionally tracks with slightly more rousing melodies, such as the gallant "Dragon Waterfall". In addition, there is also the occasional stylistic fusion, such as the beat-heavy "Demon Island" and retro-influenced "Electronic Brain Realm". However, they're too few in number to redeem what is ultimately a rather average release.

The Sega affiliates certainly bring diversity to the soundtrack, though their contributions vary in quality. Hideki Abe's "The Warrior to War" is perhaps the most stereotypical track on the soundtrack, written almost identically to a Soul Calibur character select theme, while Masamu Setsumaru's contributions also feature heavy-handed texturings and uninspiring harmonies. Most interesting are Yutaka Minobe's "Den of Thieves" and Junko Shiratsu's "Cold Wintry Wind"; both are string-based compositions, the former ambient and mysterious, the latter sonorous and scenic. Hideaki Kobayashi's "Breath of Love" is an intimate chamber orchestration that arguably exceeds the visuals of the ending scene it was intended to support. Sato ends the soundtrack with one last action cue; it is fabulous compositionally in every sense and brings a lot of colour to the main theme, but still sounds meagre compared to game music's greatest orchestrations due to its synthetic implementation.

The soundtrack to Onimusha: Blade Warriors is largely effective and listenable, but lacks a unique selling point. The focal phrases, cinematic orchestrations, and Eastern elements are all serviceable, yet lack the individuality or charisma of those of scores such as Onimusha: Dawn of Dreams or the original Onimusha. In addition, even with the Sega guest appearances and occasional retro homages, the soundtrack lacks in variety and ends up sounding like a rather homogenous tense orchestral score. Most can safely skip this score in favour of the main soundtracks in the series.