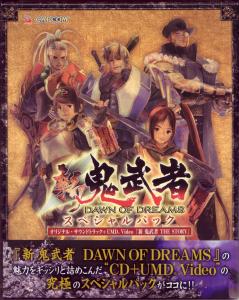 Onimusha: Dawn of Dreams is the latest instalment of Capcom's series of Sengoku period action games and, despite selling disappointingly, it was still an incredible well-designed game. One way that Onimusha: Dawn of Dreams excelled upon its predecessors was its music. Capcom let Hideyuki Fukasawa take the lead, a disciple of Onimusha 2's Taro Iwashiro who earlier produced an impacting fusion score for Chaos Legions. He was supported by Jamie Christopherson, who orchestrated the main theme and created several cinematic cues. Fukasawa made the soundtrack truly his own and the Shin Onimusha Dawn of Dreams Special Pack Soundtrack, a three disc release packed together with 120 minute UMD, provides a complete collection of his works.

When it comes to epic tracks in game music, few are quite as enjoyable as Onimusha: Dawn of Dreams' main theme. In many ways, this main theme adheres strongly to cinematic tradition with its brassy dominance, militaristic rhythms, and choral interludes. However, Hideyuki Fukasawa sets it apart with his phrasing, the main melody itself having incredible drive and vigour, especially during the fast-paced sections. The ascending string runs from the 1:32 mark and the masterful development sections thereafter serve to accentuate the drama. The final result is incredibly satisfying and addictive. The main theme also headlines the second disc of the soundtrack and this time is arranged closer to Japanese traditions. The militaristic instrumentation is this time supported by thunderous taiko drums, epic war cries, and gorgeous shakuhachi passages, ensuring an even more awe-inspiring listen. The theme makes its final major appearance in the final battle theme and, though not quite as differentiated as hoped, it still provides much of the motivation needed for the ultimate conquest.

One way the soundtrack differs from earlier Onimusha soundtracks is through its free use of contemporary elements, such as electric guitars or electronic beats. The resultant score therefore sounds considerably less authentic than its predecessors, yet the fusions are nevertheless well done and will be an appealing aspect of the score to many listeners. The theme of the new main character Soki is a wonderful example of Fukasawa's capacity to blend Asian, orchestral, and rock elements on the score. The melody is another incredible one and the electric guitars — whether used as a supporting force or a lead instrumentation — make it all the more iconic. Indeed, their composition isn't overly cheesy or jarring and the mixing of the various elements, owing to Fukasawa's background as Taro Iwashiro's orchestrator, is excellent. It is certainly the series' most memorable character theme. The likes of the heroine's theme "Jubei Yagyu Red Theme" meanwhile is an excellent example of how Fukasawa is able to integrate techno beats into an otherwise organic composition. Those familiar with the original character themes on Street Fighter IV will see many similarities in Fukasawa's approach between the two scores. The final result has a very punchy feel to it, yet also sounds appropriately feminine.

Although a lot of the album has a motivating and anthemic quality to it, there are still numerous darker moments of the scores. Fukasawa's treatment of the main theme, for example, is entirely different on "Impatience Music" — the main melody is now peppered with all sorts of crisis motifs, the rhythms and pacing now frantic and discomforting, and the chorus is now ominous rather than ethereal. Other portrayals of the main theme are subdued and mysterious, for example in the series of "Hideout" themes. Such persistent rearrangements ensure the score comes together as a whole thematically, yet is still filled with many different moods and atmospheres. Fukasawa's portrayal of the face of evil, Fortinbras, is once again highly thematic and features many familiar elements such as string anacrusi. Yet contrary to his portrayals of characters such as Soki, Fukasawa this time creates a sense of fate rather than hope, without excessively relying on Hollywood clichés.

Whether portraying good or evil, Onimusha: Dawn of Dreams' score is ultimately an action-packed one. In addition to the main character themes, there are numerous special battle themes and they all have several things in common: rhythmic drive, timbral richness, and developmental contrasts. For instance, "Black Oni vs Hideyoshi" creates the feeling of duelling characters, each portrayed with different moods and thematic threads. The juxtaposition of the main theme with a chord progression oddly reminiscent of Pirates of the Caribbean is a particularly good way to keep the score sounding familiar yet fresh and edgy. Fukasawa also always impresses with his ferocious use of percussion. The five "Test of Valor" themes are interesting deviations from the rest of the soundtrack, since electronic elements eclipse the orchestral forces for the first time. While lacking the Onimusha sound, they still feature many of the familiar characteristics of Fukasawa's musicality and are also effective in the game, since they provide some novelty and variation to action away from the main storyline.

"The White God" and "Dawn of Nightmares" are the most expansive compositions on the soundtrack, each approximately ten minutes each. The former is a feat of ambient soundscaping, reflecting both divinity and danger during its growth, continually leaving gamers perplexed by what beholds them. The latter meanwhile an example of dark Hollywood-style scoring done right. It undergoes a spectacular evolution during its playtime, from its tremolo string openings to its reflective moments to its barbaric brass interjections at its two most voluminous peaks. A special mention is also deserved for "Ohatsu's Tears", another complex piece of underscore that really gets to the heart of a character's emotions. It would have been even more emotional if it were to receive an orchestral performance, like Jamie Christopherson's often shorter and less significant cues on the promotinal soundtrack release, though Fukasawa's sampling and mixing still makes quite an impression. Clearly, Fukasawa's cinematic background enables him to do more than just create punchy themes that loop after two minutes and he is able to create much more detailed portrayals too.

If there's any word that describes the Onimusha: Dawn of Dreams soundtrack, it would be 'wholesome'. As emphasised throughout this review, Fukasawa's approach to thematic, rhythmical, and timbral development is almost always satisfying and essentially every minute of this score has that 'oomph' earlier scores in the Onimusha series lacked. The choice to integrate rock and electronic elements into the score was a daring one, but it is skilfully achieved and pays off at least in terms of entertainment factor. The only features that slightly let down the release is the overreliance on sampled elements and the absence of Christopherson's orchestral cues. However, this full three disc release is certainly still the definitive version of Onimusha: Dawn of Dreams' score.

Includes a bonus UMD disc with 120 minutes of video made via the same method that produced the graphics in the game.
Album was composed by Хидеюки Фукасава and was released on May 31, 2006. Soundtrack consists of 69 tracks tracks with duration over more than 3 hours. Album was released by Suleputer.