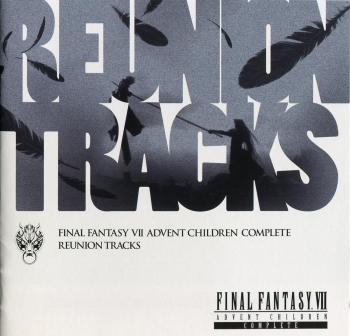 "Beyond the Wasteland" provides a fitting way to start the album, both because it is used in the opening credits and compiles together many of the stylistic elements found elsewhere in the album. Following a bland and minimalistic introduction similar to the original, it erupts into action-packed passage blending edgy cello riffs, gritty rock performances, and increasing orchestration. While Kazuhiko Toyama's orchestration doesn't rescue the theme, it does provide a little more richness and drama. It's still not the much-needed epic overture though. A more definitive improvement is the new version of the piano piece "Sign" used when meeting Rufus. The lacklustre original repeated the same eerie diminished arpeggio patterns over and over before eventually adding a few underdeveloped vocal notes. This arrangement does quite a bit more by elaborating on the piano lines and offering interplay with various string elements. However, it adheres too strongly to the same predictable chord progressions and arpeggios to live up to its aspirations to sound like one of Dvorák's romantic miniatures. It feels much richer in context now, but still isn't a creditable musical achievement.

Toyama generally proves himself to be a weak arranger throughout the album. The new arrangement of the Final Fantasy VII main theme features some more impressionistic sections, some of which can be mysterious and beautiful, yet once again the orchestration and harmonisation is generally too weak to create timbral richness. While more worthwhile than most entries on the album, its inspiring moments are limited by the hollowness underneath. Toyama's piano arrangement of the theme is even less inspiring and falls very short of Shiro Hamaguchi's version; the inevitably short track length is part of the reason, but more significantly the piano use itself sounds so simplistic that most amateurs could arrange better. "Aerith's Theme" is also butchered with an arrangement that coarsely blends chamber orchestration with dabs of Hamaguchi's piano version. The concept is very pleasant, but the actual interpretation sounds sloppy due to arrangement and performance faults. Adding to the disappointments, Keiji Kawamori's "Anxious Heart" is very brief and accented with cheap electronic elements, while "Music Effect" is little more than a few surreal piano notes in the tone of Final Fantasy VII's more mysterious pieces. While these tracks just about work in their specific movie contexts, they bring little to the stand-alone listening experience.

The rock side of the album fairs a little better than the chamber side, though the pieces generally undergo little treatment. "Battle in the Forgotten City" helps to bridge a gap by blending the rock aspects of the original with bombastic percussion and orchestral flourishes. Meanwhile "Those Who Fight Further" sticks closely to the original too with an engaging blend of aggressive rock and techno riffs. The new remix merely features some additional loops and the occasional new layer or screechy solo. However, it basically sustains its six minute playtime without tripping over itself within the film and is moderately entertaining on a stand-alone basis. The changes to the relatively brief "Black Water" and "Materia" are pretty superfluous too. That said, Keiji Kawamori's once masterful "The Chase on the Highway" has undergone some treatment for the worse. The bass riff is repeated so many times, especially in the introduction, that it becomes tedious and the number of sudden transitions is now excessive. While there is a nod to Final Fantasy VII's "Crazy Motorcycle", it's only one of many brief and random sections that eventually extend the track time by two minutes. Rather than going straight down the highway, this one just goes round in circles with a few unproductive tangents along the way.

The track that has lost the most flair is crucially "Advent: One Winged Angel". Most fans, including myself, were delighted by this over the top blend of orchestra, chorus, and rock band. Rather than reuse the orchestral performance from Shiro Hamaguchi's Final Fantasy VII Reunion Tracks, it appears that Square Enix decided to finally re-record the orchestra part, unfortunately with Kazuhiko Toyama as the conductor. The performance is one of the worst out there — the lead trumpets are too soloistic and give a somewhat jazzy flavour to the cadences, the chorus is a little out of balance with the orchestra, and, worst of all, the timpani is way too prominent and sounds very tinny. The problems really mount up when the arrangement finally diverges from the Advent Children version at the five minute mark to offer three sparse and rambling new sections for orchestra. Given the pieces appears to end at the 6:00 mark, the subsequent coda feels especially anticlimactic. It seems that Kazuhiko Toyama really struggled to extend an already brilliant arrangement and, in doing so, exposed his lack of inspiration, lost the dramatic arch, and oversaw a horrible new performance.

Another composer known for creating illusions of substance is Takeharu Ishimoto, who was recently assigned to score Denzel's book-to-anime adaptation "On the Way to Smile". The brief score for this project is oddly tagged on to the end of the album, but it isn't sufficient to save it from mediocrity. In order to accommodate listener's tastes, most of the tracks take a piano focus — in fact all but two open with the instrument — and this isn't necessarily a bad thing. As many will have noticed in the past, Ishimoto is capable of creating fairly soulful piano tunes in the style of light rock pieces. However, his lack of training results in many cringe-worthy naivities once again comparable to that of an amateur. When analysed, "In the Sky" is little more than some major arpeggios, two note chord sequences, and a six note melody, while "Blue Sky" is incredibly similar. No matter how hard pianist Rieko Mikoshiba tries, it's difficult to express much humanity with such little substance without sounding contrived. Meanwhile "Doubt" and "Red Sky" integrate the instrument into otherwise very ambient themes reminiscent of those in Crisis Core: Final Fantasy VII. While pretty repetitive and bland in the first place, the poor synthesis really strips the atmospheric effect and makes the tracks sound 'wrong' in ways that were never intended.

It appears that Takeharu Ishimoto programmed the music himself, as a former synthesizer operator and all, but this doesn't guarantee good quality. The string samples that dominate "Daybreak" are just as unrealistic and subhuman as those in Kingdom Hearts II. It degrades a potentially decent arrangement of Final Fantasy VII's main theme into a thin and warped mess. The arrangement of "Tifa's Theme" in "Connected Heart" is even worse given both its superficiality, brevity, and synthesis. The only times when Takeharu Ishimoto actually succeeds is when creating acoustic ballads. "Promise" sounds pretty with its combination of piano, acoustic guitar, and drum kit despite its riff-based construction. The late violin melody also brings a lot of the hope to the theme despite the excruciating synthesis. Previously featured on a mini-album, the main theme also proves pretty good. The track revolves around piano and strings performances of a simple but sonorous melody somewhat reminiscent of his main theme for Crisis Core: Final Fantasy VII. The piano work is quite individual and, in spite the continued naïvities, fairly intricate this time. The string sections add drama and character to the comprehensively developed piece in a derivative yet engaging way. Decent enough, but one of only two highlights on the score.

The content on the Final Fantasy VII Advent Children Reunion Tracks ranges from primitively functional cues to shameless fan services, but rarely has any artistic value. Many would say the same about the films themselves, but at least they were designed to be superficially rich and beautiful. The same is not true for the soundtracks, which are consistently plagued by thin orchestrations, amateur piano use, lifeless performances, and bad synthesis. The extended versions of Advent Children compositions are either minor improvements on already weak tracks or massive degradations of actually accomplished ones. Meanwhile the "On the Way to Smile" score proves to be Takeharu Ishimoto's very weakest to date with just two highlight tracks. While this album had big potential, the team were mischosen and misguided. In addition, the decision to compile just the new material reduces the coherency of the album and a full score for the movie may have been better. I recommend people with affinity for the originals or, worse, contempt for the already dubious Advent Children score to stay away from this album.

1. Beyond the Wasteland - FFVII ACC Version