Eyes On Me ~featured in FINAL FANTASY VIII 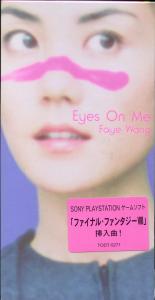 Eyes On Me ~featured in FINAL FANTASY VIII
Front

Ahhhhh Rinoa; how I hate you. How such a pretty theme could ever be associated with you I'll never know. Before you think I'm about to trash this album, stay with me for a few minutes. "Eyes on Me" is the vocal rendition of the piece "Julia" that plays for Laguna at the bar in Galbadia. It is their theme; we're told in the game that Julia wrote it for Laguna. It really makes you think, doesn't it? This wonderful theme which expresses the relationship between Julia and Laguna, and it becomes the "song" on which Squall and Rinoa build their love for one another. In all honesty, it makes me gag. But for the sake of this review, let's pretend we're talking about Julia and Laguna.

OK, so we all know this theme. "Eyes on Me" was the first vocal piece to appear in a Final Fantasy game, and it is the ultimate example of the traditional romantic ballad. It's got everything: the sappy lyrics, the slow deliberate bass line, the soaring strings, the empathic guitar, and the beautiful female voice. 'How could anyone ever write a bad review about it' you ask yourself. The simple fact is, this song can't get a bad review unless the person listening to the song can't stand ballads. Luckily, I'm not one of those people.

But, let's get serious for a bit. The instrumentation of this track is simply beautiful. It's understandable that the traditional instrumentation for a ballad was used, and that's because it's been proven to work. The Rhodes organ is light where it needs to be, while the guitars are just heavy enough to provide the needed support for the vocals. Faye Wong does a fantastic job at really bringing through the longing and the distance we see in the game between Julia and Laguna. Wong's voice is of the higher variety, and sometimes this causes the lyrics to become slightly merged together, but that can be overlooked. Her voice is just strong enough to contrast well with the instrumentation, without being overly powerful or dominant.

Also included on this album is an extra track called "Red Bean." The title may be a little odd, but this track is quite beautiful. We get to hear Wong sing in her native Chinese, rather than English, which allows us to really hear the power that her voice is capable of. Her lower octave especially is a fantastic contrast to the higher, more airy octave we hear in "Eyes on Me." While this track sounds great, it's nothing special. Great to listen to once or twice, but I imagine most people will pass by it after that. There just isn't enough in the track to warrant a repeat on your CD player.

This is "Eyes on Me," pure and simple. We all know the theme, and we all know the significance it has in the game. We know what to expect from it, and most likely many of us at one point or another have memorized the lyrics. The basic fact with this album is you either like the vocal theme, or you don't. Because of that, it's hard to really justify the true strengths or weaknesses of the tracks without compromising what this track means to the series, and to the fans of the games.

"Eyes on Me" was the first Final Fantasy ballad and a landmark creation in terms of making video game music accessible to popular music fans. Sung by China's best-selling artist, diva Faye Wong, composed by the one and only Nobuo Uematsu, and arranged by the competent Shiro Hamaguchi, many fell in love with its melody, the main theme of Final Fantasy VIII, and it became so popular that it won "Song of the Year (Western Music)" at the 14th Annual Japan Gold Disc Awards in 1999. Yet it's been savaged on an almost daily basis by those who felt it was overrated or, indeed, unworthy of a rating. Some regard this as a elitist backlash against a symbol of revolution in video game music, but were the criticisms all that unfounded?

The centrepiece of the single, "Eyes on Me," is based on a straightforward love ballad format with near-enough complete emphasis on Faye Wong's vocals. Featuring Final Fantasy VIII's main theme as its melody, Faye Wong emphasises its emotional qualities through providing a sense of longing and love with her passionate English performance. It beautifully portrays the love story of Squall and Rinoa, used with surprising subtlety in the scene onboard the Ragnarok where it was used in the game.

The accompaniment of "Eyes on Me" is merely decent, comprising a blend of sappy orchestral instrumentals, keyboard, bass, and drums used in a formulaic way, but this isn't really a criticism. The theme intended to be a hackneyed love ballad and ultimately succeeded, while being musically acceptable thanks to Hamaguchi's arrangement. Its main problem is the lyrics, which are a prime example of Engrish where tenses and verbs are concerned ('Whenever sang my song' has certainly gone down in history), though Wong nonetheless executes them impeccably despite her native language. "Eyes on Me" was a symbolic theme, but neither great or awful; it just did what it was supposed to do.

Jim Lau's "Red Bean" is a touching theme that, while not as well-developed as "Eyes on Me," offers a beautiful sound through its piano use and sentimental vocals. The simple introduction to this track couldn't have been better given it adds a sense of anticipation about what is to come. After the drum beat is added, Faye Wong seems to become increasingly passionate while vocalising. Later in the track, she is uplifted once more with the introduction of the strings, which are much more prominent in this track than in "Eyes on Me," thanks to a brief but appropriate solo line during the bridge. The greatest feature of this track is the arch shape that it takes, blooming passionately in the centre before ending subtly, ultimately reflecting a love story.

Although it may please many budding singers, the fact that the last track is a karaoke version of the original "Eyes on Me" is a little disappointing. The majority of the fans would have preferred the superb orchestral version of the track that was used as the ending theme of Final Fantasy VIII. While it exposes the instrumentals of the tracks, this isn't that desirable, since they're mere accompaniment to the voices and sound superficial and empty without them/

I'd advise most to purchase the Final Fantasy VIII Original Soundtrack above this item, given it features both the original and orchestral versions of "Eyes on Me" as well as nearly 100 excellent instrumental tracks, including the masterpiece "Liberi Fatali". However, for those who played Final Fantasy VIII and were only interested in its love theme, it's a highly recommended and cheap purchase.

This release is the vocal single for Final Fantasy VIII. It features "Eyes on Me", the love song composed by Nobuo Uematsu and sung by Faye Wong, as well as a B-side.

"Eyes on Me" is is a love song that's played during a certain point in the game where the lead characters love for each other is declared. The song's lyrics are a little too sickly, but do enough to demonstrate the feelings shown in the scene. The music is very sweeping, with strings complementing the main tune extremely well. It has a presence to it as well that means you will listen to it again and again. It is a beautiful song that saw the start of vocal themes in RPGs being a must-have. That's the reputation it lives up to. Enough said!

The B-side to the single is a song of Faye Wong's sung entirely in Chinese (rather than English in "Eyes on Me"). It follows a similar style to "Eyes on Me" but is a little more reliant on Faye's voice and soft tinkering on a piano. It's another nice song that has a beautiful melody and, although its not catchy, will still have you swaying around in your seat to it!

To round off the single is the karaoke version of "Eyes on Me", which you can sing along to with all the backing vocals still left on. Why not give your own stage performance!? Even the words are supplied for you!

"Eyes on Me" has been accused of being too childish, but in this reviewer's opinion, it is a beautiful song that's more than worthy of being the main theme.

All vocals by Faye Wong.

Composed by Nobuo Uematsu (1,3), Jim Lau (2)
Arranged by Shiro Hamaguchi (1,3), Alex San (2)
Album was composed by Jim Lau / Нобуо Уэмацу and was released on February 24, 1999. Soundtrack consists of 3 tracks tracks with duration over about 15 minutes. Album was released by Toshiba EMI.