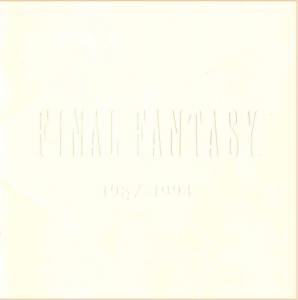 In 1994 Square was on a roll. Final Fantasy VI had been an enormous success both in Japan and America and the quality of its soundtrack was so widely praised that it was even released in album form in the USA, while the Japanese market was periodically injected with singles, EPs, arranged albums and more. The period between FFVI and FFVIII was probably when Final Fantasy soundtrack albums sounded more like a viable commercial adventure, and it was then when the first Final Fantasy "Greatest Hits" compilation was released, focusing mainly on the arranged versions of the pre-FFVI soundtracks. This was repackaged later in America as Final Fantasy N Generation, to serve as the companion to a new PS1 era compilation called, of course, Final Fantasy S Generation.

Which better way to begin a Final Fantasy compilation than with the Final Fantasy theme? This track comes from the very first Final Fantasy arranged album there was, a live recording of symphonic arrangements of music from the first two games. "Scene III" is a medley of three pieces from the original Final Fantasy: "Opening", "Town" and "Matoya's Cave", which might be described respectively as anthemic, peaceful, and vibrant, with at least the first and last of those being widely considered among the finest compositions in the original soundtrack. The orchestration is quite colourful, if a bit on the lush side, and the arrangement of "Matoya's Cave" is a bit slow, but all three arrangements are among the best ones for the respective themes.

Moving to the Final Fantasy II soundtrack, the Final Fantasy Symphonic Suite was concluded with this arrangement of what is probably its most remembered theme, the "Rebel Army Theme". Everything that was said about the orchestral colour of the "Scene III" can be repeated here. Actually, being a finale, it gets more intense at the end, with the horn and timpani accents sounding rather epic. The slow pace of the arrangement actually robs the melody of much of its original martial overtone, which is a minor loss.

Legend of the Eternal Wind was a curious Final Fantasy III related album that featured some narration punctuating several long tracks consisting mainly of synthesizer-arranged medleys of FFIII tracks, but which had also some original sections thrown in. "Roaming Sheep" from the "Montage" section is one of those, and as such it doesn't appear anywhere in the FFIII soundtrack. It's a vocal piece in Celtic folk-pop style with three-part harmony sections and it has all the earmarks of the genre: the late-Renaissance-like vocal homophony complete with suspended fourths and plagal cadences and the ethnic percussion, acoustic guitar, and keyboards trying to coax images of centuries past. Interesting and enjoyable, if somewhat clichéd.

"The Water Maiden", probably the most famous tune from the Final Fantasy III soundtrack, is also featured from the album. The folk-influenced does a great job of portraying both the kind nature of the water priestess and the resigned sadness about her being suspended in time; as for the arrangement, even if it has a bit of the plastic sound of early 90s MIDI synthesizers, it gives the more modern version from the Final Fantasy III DS soundtrack a good run for its money; I actually prefer the flute featured here over the soprano sax used in the more recent rendition. "The Breeze" is the conclusion of yet another Legend of the Eternal Wind segment and, like "Roaming Sheep", is not really featured anywhere in the game. It is my least favourite track in the CD. The intro is strangely reminiscent of a section of the then-yet-unreleased Final Fantasy IV Main Theme, but after that it becomes a very stereotypical ballad that to my ears sounds like a by-the-numbers Broadway song. This is the first step towards "Eyes on Me" indeed.

Rightfully considered one of the highlights of Nobuo Uematsu's Final Fantasy compositions, the "Theme of Love" of Final Fantasy IV has a very apt name, as it reminds me a little of classic movie love themes. The featured Celtic Moon version is one of the most celebrated, although to my ears the Irish solo fiddle style is a bit too hard for this melody, but I like it much. The trademark friendly town theme, "Welcome to our Town" is also well suited to the Celtic treatment it receives here; to the extent that the Celtic Moon version has become the de facto standard version of the piece.

Featured later in this compilation, "Troian Beauty" is definitely one of the highlights of the Celtic Moon album too, even if it's one of the tracks that stick closer to the in-game version. This is certainly a piece that was screaming for the folk treatment, and like with "Welcome to our Town!", this has ultimately become the main version of the tune. The final Celtic Moon selection from the CD is "Rydia" and it is again relaxed in mood. It's beautiful — this tune has always been so — but the selection feels a bit monotonous by now. This is perhaps one of the arrangements from Celtic Moon that feels less organic, as the backing vocals sound too processed for my taste. Still, I like the melody, but I think it is repeated too much; I feel it works better as a short cutscene piece, like in the game.

"As I Feel, You Feel" from Final Fantasy V is a beautiful slow tune that really manages to evoke the feeling of being inside a deep, quiet forest (which is the context in which it played in the game it comes from). It was arranged on synth by Nobuo Uematsu in the Dear Friends album, adding an apt solo piano intro and narration in Saami language over the background vocals of the singers from the Finnish folk group Angelit. This remix substitutes the narration with a Japanese one, which is why the speaking voice sounds quite different from the singing ones. A rendition of the "Cripper Tripper Fritter!?", the prototype of the Moogles' Theme, is also featured from Dear Friends. The melody of this tune has a circus-like weirdness (made even weirder in this version by the inclusion of a myriad of strange sounds and goofy synth patches throughout It's interesting that this version introduces the division of the main theme as a duet between a high pitched instrument and a booming bass instrument, like in the FFVI version.

"My Home, Sweet Home" was a vocal tune from the Dear Friends album, sung by the vocalists of Angelit over a backing played by Finnish folk musicians, and which was an arrangement of the theme of the Final Fantasy V's hero's hometown, making this the third town theme in this compilation. By this point I'm feeling a severe shortage of action and battle melodies (actually there will be none of them for the rest of the album). That said, I always liked the folky melody of the original theme, and the vocal version is stellar with the beautiful sound of the bilingual vocal harmonies. It was a clear highlight in Dear Friends and it's a clear highlight in this compilation.

"Aria Di Mezzo Carattere" is the only piece from Final Fantasy VI in the compilation, which makes me think the intended audience for the CD was the people who had already bought FFVI music and wanted to sample Uematsu's earlier oeuvre. Well, in case someone doesn't know what the "Aria" is, FFVI had an opera scene in which an aria was sung, and this track is such aria arranged in true operatic style. This means that if you're the kind of person who doesn't like classical style singing, particularly with a generous dose of vibrato, you won't enjoy it much, and if you're an opera fan you might find the melody a bit trite. But it's still one of the cornerstones of Uematsu's legend nonetheless.

Towards the end of the release, there is an exclusive remix of the Chocobo theme featured in "Songo de Chocobo". Songo is a type of Cuban popular music which basically mixes traditional Cuban son and rumba with Latin jazz and funk, and this is the Chocobo theme done in songo style. I don't know how authentic it is, being no expert in Latin music at all, but if I may say so, this might be among the most enjoyable Chocobo versions there are, and certainly the most underrated ever. I even like it more than the arranged "Mambo de Chocobo", as this is a bit faster, funkier and livelier and the Latin percussion solos are exciting enough without being showoff-ey. I'd get up and dance to it if my knowledge of Latin dancing wasn't even worse than my knowledge of Latin music!

There are two selections from the Final Fantasy Piano Collections, "Dear Friends" and the main theme. It's curious how "Dear Friends", a small section of the ending sequence suite of themes from Final Fantasy V, has come to be one of the most famous pieces of the game, but the melody is charming enough. While this is one of the better pieces from the collection, it is a pity that only the worst of the series' piano albums is represented here. I am partial to the Dear Friends version, but simply because I like the piece better as I originally knew it — as a guitar and recorder song. Just to bring the disc full circle, it ends with the same melody it began, the Final Fantasy main theme. The style, performance credits, and the fact that it is in the "bonus" lead me to believe it is an outtake of the Final Fantasy V Piano Collections. If that's the case, apparently the piece was fully arranged and recorded before someone noticed that they had already released a perfectly viable, if not stellar, rendition of it in the Final Fantasy IV Piano Collections. As a little closing for the album, it is OK, but not for much else.

As a general compilation of Final Fantasy music, this disc is quite incomplete, of course. As a compilation of early Final Fantasy music it's not comprehensive — most of the music falls into a peaceful mood with a total lack of battle, crisis, or action tracks. But it's certainly nice to listen to while it is on. Worth getting if found cheap and you don't want to invest heavily in pre-FFVI albums, otherwise you'd probably prefer to get some of the original albums and make yourself your own mix CD.

This album contains a collection of pieces from the following arrange albums:

Tracks 4 and 12 are remixes of the original arranged tracks and tracks 15 and 16 are previously unreleased pieces.

(PSCN-9101 is a limited edition release of PSCN-5011 that comes with a cardboard slipcase and the book 'Jinsei omou ga MaMa' by Nobuo Uematsu.)
Album was composed by Нобуо Уэмацу and was released on December 10, 1994. Soundtrack consists of 16 tracks tracks with duration over more than hour. Album was released by NTT Publishing.