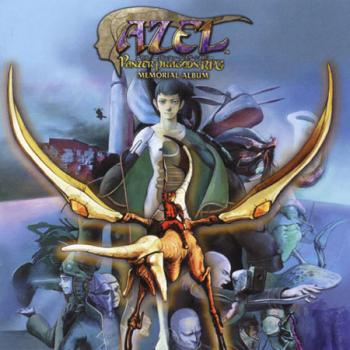 The Panzer Dragoon Saga soundtrack, composed by Saori Kobayashi and Mariko Nanba, is not exactly the dragon-themed RPG soundtrack I expected. I haven't played this game but I know I don't have to understand the music when listening to this sort of fantasy RPG soundtrack. Whether you expect great or bad music, I'm sure you aren't going to be expecting the most unique music in the world considering the dragon influence that so many games seem to have. You therefore might end up being surprised at how unconventional this soundtrack is for its time. The Panzer Dragoon RPG Azel Memorial Soundtrack is a reprint of the soundtrack complete with two bonus remixes.

Panzer Dragoon relies on fantastical ambience and percussion, rather than catchy melodies, to be good. In fact, the opening track "Ecce Valde Generous Ale" (aka "Behold the Precious Wings") shows off the percussive and ambient nature of the soundtrack right away. Though much of the album is mostly composed of synthetic music, there are a few exceptions like this track. The composers even added a majestic choir line to the theme that works very well. Because of that, this is one of the few tracks with a flowing melody as opposed to a more ambient and subdued melody. And it's not cheap bargain bin "new age" either.

When listening to certain tracks, I find there's almost an exotic and immersive aspect to this soundtrack. Of course, most fantasy music is technically exotic, but as gamers, we find that style familiar if we play enough RPGs. Tracks like "Village of the Seekers", "The Forest's Scream", and "The Chaos Within the Silence", however, helps the album go above and beyond what other fantasy games tend to accomplish. The former, in particular, is definitely one of my favorite tracks with its twangy Middle Eastern instruments and subdued marimba beat. The result is pretty but haunting. A lot of this album maintains this dark sound and even the traditionally happier and relaxing music has dark undertones. Look at "Rest", for example. I'm guessing it's an inn track, but it's extremely melancholy. It is also one of the few tracks with more of a melody, which naturally makes it stand out a little more.

This album still manages to be catchy with most music lacking in strong melodies or harmonies. This may be due to the crispness and cleanliness of the tracks and the variety of instrumentation. The tribal percussive sound juxtaposed to electronic synthesizer blurbs makes for extremely interesting pieces, particularly the battle tracks. "Giant Creature", for instance, is ambient but has a beat that works for it and creates authentic tension in an individualistic way. Some pieces can still fall a little sort though. "Sestren" may be a little too ambient for my liking. It's basically a repeating ambient sound and there's not much too it. I'm sure it found its use in the game. Other tracks like "The Black Feet" may still come off a little formulaic. There's definitely still enough good to make up for the bad on this album though.

I imagine the final battle must be extremely epic when listening to "Final Battle ~Recurrence~". This track takes the ambience to the next level. There's no melody, no beat, and nothing familiar in the least. This is out of this world and I felt like I was watching Kubrik's 2001: A Space Odyssey. The synthesizer chimes in over what is otherwise "noise" and just when you think you are about to catch a melody it kind of swoops away. It's tense and plays with you head. It brings on some real emotion and I find it interesting that this track works after a tried and true set of percussive tracks before it. I try to keep in mind that this approach could have ended up as a complete bore, but it's not boring due to the brilliant execution. You may think this approach is good or bad for stand-alone listening, but I only get that feeling from a few select pieces on the album. Every piece, good or bad, creates atmosphere and that's a great feat.

As previously mentioned, there are two bonuses on the Memorial Soundtrack. They're both arrangements of the ending theme "Sona Mi Areru Ec Sancitu" ("Art Thou the Holy One"). The original is a memorable setpiece featuring Eri Ito's poignant ethnic vocals alongside Hayato Matsuo's sweeping orchestrations and some celestial choral interludes. Tomonori Sawada's Re-Arrangement at the end of Disc One is an electronic arrangement along the lines of some new age or chillout artists. It still maintains the soothing and ethereal quality of the original, despite the very different elements. Unfortunately, Ron Trent's Prescription Vocal Club Mix at the end of Disc Two is a little too superficial and repetitive, though some of the soft synth pads are enjoyable enough. These remixes are decent enough bonuses, but most won't miss them either.

In a game where riding dragons is involved, it would have been easy to just cop-out with a generic fantasy RPG soundtrack. This album is nothing of the sort. Saori Kobayashi and Mariko Nanba are brilliant for creating an immersive soundtrack that still captures the fantasy feel of the game while trying something completely new for the genre. It's not that it's different but also that it really adds to the genre. There's plenty of interesting instrumentation from classical band and orchestra instruments to tribal percussion and super ambient synthesizers and sounds. The balance is varied throughout the album and, in turn, it isn't monotonous in the least. This memorial album is slightly more available than its predecessor and includes a couple of bonuses too, though it'll still probably be necessary to find a second-hand copy.

Vocals:
Eri Itoh: 1.30, 2.28, 2.29
Album was composed by Mariko Nanba / Саори Кобаяси and was released on April 21, 2001. Soundtrack consists of 59 tracks tracks with duration over more than 2 hours. Album was released by Marvelous Entertainment.