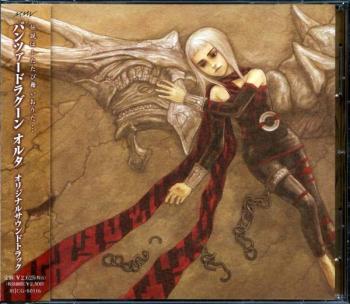 Panzer Dragoon is a funny series. I'm well aware of this adjective's total lack of connotation of such plaudits as "brilliant", "beautiful", "ingenious" and "engrossing", all of which are more common descriptors of the series, and all of which are richly deserved. But I've chosen the word "funny", because Panzer Dragoon does things no other games do, and there's no real way to account for it other than supposing that this one series is where Sega has arbitrarily decided to take a Custerian stand against all that is stagnant, ossified, dull and decrepit in video games. The series has flatly refused to sacrifice any integrity in bringing its vision of visually arresting, densely plotted apocalyptic desperation to the small screen, representing one of the few console game properties to present storytelling approaching cinematic quality, yet has never submerged gameplay concerns beneath the needs of story progression. That's funny stuff to be happening in games nowadays. Where this commitment to excellence pertains to music, still funnier things happen.

The original Panzer Dragoon was scored with a mix of largely familiar new-age and synth rock conventions that, while well-produced, didn't live up to the vision of Sega's strange new world or nail the spirit of its mythos-in-the-making. But with Panzer Dragoon Zwei, the sonic identity of the series took shape and established a sound not just new to games, but one with little clear precedent in the more secular realms of music. As fascinating an effort as Zwei was, the cultural currents that have taken on life in the series seem to have found their ideal musical interlocuter in Saori Kobayashi, a woman who materialized out of the ether to compose the fantastic score to Azel (with Mariko Nanba) then disappeared back into the void, and has been magically resummoned by Sega's Office of Black Magic to provide the music for Orta, the most ambitious and beautiful entry in the series and a welcome tonic to current trends. The church of gaming is clogged from altar to vestibule with torpid RPGs and graphic adventures bloated up with interminable cut-scenes; sacrifices to the ideal of the "cinematic game". Meanwhile, Panzer Dragoon has come closer than any of them, without particularly trying, and Orta is the template's most refined iteration. The elegant on-rails layout of the game is what produces its vivid cinematic pacing, and in terms of sound allows for the music to be dramatically glued to the action; a wasted opportunity if the composer's lack of theatrical sense has him lashing music to scene with scotch-tape and thumbtacks. Which is why the rite that conjured Kobayashi from Dimension Z was worth every eye of newt it took.

The flow of each track Kobayashi crafted hews closely to the progression of the stages and some, when appropriate, demonstrate a concern for psychological state. The opening chase scene "City in the Storm" builds up a confusion of disparate organic and engineered sounds that seem to pursue each other, draws a slow-burning filament of grinding electricity over the static during the second half, and closes with a brass-like timbre referencing a hunting horn figure, like some alien call to arms sounding a desperate note of hope before the curtain falls. It's inspiring, powerfully cinematic stuff. For "Forbidden Memories", a wicked stage in which Orta and the dragon are transmuted inside a vast organic computer system, Kobayashi creates a sense of malevolent space with vertical chunks of cold machine sound and orthogonal harmonic motion pushing the listener through a glaucous sea of electrodes. The most elaborate evolutions occur in the final full stage theme "Imperial City", which paints the sooty, industrial environs at the start with a lurching rhythm of crashing piano chords and percussion, until an urgent pan flute takes the lead as the dragon races the corridors of the complex, building up momentum which drops to a cautious tread right as the player enters the breeding chamber of the Dragonmares, and the resonant rattling of a fictive metallic idiophone fills the cavernous depth with ghostly tension.

On the thematic level, Kobayashi's concern for consistency is revealed in the ending song. "Anu Orta Veniya" finally exposits the main theme that's been germinating since the start, taking first tentative steps towards expression during Orta's liberation from prison at the end of "Dragonmares", and stretching mournfully further out in "Pain as she faces the injured dragon buried in the snow. Compositionally, the song follows the same path walked by the ending theme of Azel — a vocal line inflected with the color of East Asian folksong, keening above full orchestration augmented with layers of ethnic percussion — but stops at different places, as if showing us views of a familiar piece of beautiful scenery from alternate angles. Given the connection between the characters of Azel and Orta, their similarity of theme is unlikely to be accidental.

The boss themes by necessity have less of a narrative agenda; they're just there to sound real good and convey some general sense that the material world will in fact abruptly end if you don't win this fight. "Ancient Weapon 2" is an almost smug lecture on how great boss themes are written; a basic, primeval rhythmic pattern of aggression realized with a battery of factitious percussive samples immediately drops the ball into play, and elliptical stabs of synthetic brass and pseudo-duduk warbling carry the tension towards a transporting climax of distant analog beeps rebounding over a howling mass of propulsive harmonies and percussion, stirring up swirling swaths of tonal color in its wake. Gets me every time. But no matter what the context of the cue, there is nothing inert in any of these tracks; this is music that's constantly searching, heading at breakneck speed towards an unknown goal. Which of course also describes the nature of the game.

Such a pleasure for the user-end, and yet it really must suck to be a Panzer composer, and have to address not only the perpetually shifting dramatic needs of the game, but the insularity of design required for the music to sound like no other world could have brought it about. It must suck to be in the middle of writing a piece and suddenly think, "Hey a flute would sound great here. But first, I have to invent some filtered, modulated flute-like thing that could plausibly pass for what the arthropod overlords of Gamma Cephei play during their mayday festival. Yeah, the coffeepot better be full when I walk into the kitchen." But it's so worth it. It's so worth it when you hear the whip-like crackle of that filtered nearly-a-flute on "Altered Genos", dancing as if alive above the heavy African-based percussion and shooting star streaks of synth.

It's so worth it when you hear the mellow warmth of a reed instrument that doesn't exist yet trickling over the crisp, icy textures of "Eternal Glacies", straining against the walls of meter as a stuttering rhythm suggests the dragon's wounded flightless state. All the extra work and demands must be worth the pride of sitting back, hitting play, and knowing you created these anachronistic little firestorms with coarse flaming arrows of wood and pitch flying amongst bursts of laser light from an LED horizon. It's easy enough to mix a bamboo flute with a cybersynth pad and call everyone over to admire your artistic dichotomy, but Kobayashi's sincere conjectural approach to what the music of Panzer's world would sound like and her attempt to connect the dots between mutually exclusive genres extends to the roots of her compositional thought, where the large scale metrical irregularities and elisive contours contained in her melodic structures draw a tangible link back to medieval and renaissance folk music, while an armamentarium of gleaming alloyed timbres make clear that it's the medieval era of no world we know. Who is this woman? Where does she sleep? Why isn't she chained to a desk in my room, writing the soundtrack to my life? That's really not half as disturbed as it sounds (it's a little disturbed) because to hear music of this class is to crave more, and when you look at how little of it the creator seems to have produced, you start to worry about how she's paying rent. I shouldn't have to worry about that and neither should she.

The soundtrack is fleshed out with a few contributions from Yutaka Minobe. Indicative of just how strong the pull of the Panzer world is, the rote RPG parochialisms he preached for Skies of Arcadia are nowhere in evidence, and his tracks mix seamlessly together with Kobayashi's to satisfy the ineffable demands of the Panzer sound. It's about halfway through "The Fallen Ground", by far the best track he's ever written and one he's not likely to top, that you realize there's something in Panzer that's bigger than any of the people involved, some spirit that leans forward to light a fire under every muse's ass. Minobe was definitely inspired by something preternatural when he whipped up this hypnotic flow of pure sonic liquid, with an expressive, entirely naturalistic pan-flute solo and a perfect simulation of improvisation from an unidentifiable plucked zither lead that sounds part guitar, part sitar, part cimbalom, and part gut of whatever animal the residents of Panzer world figured out sounds good stretched across a sound board. See, they're inventing instruments over here just for this game. Not just sound textures, but instruments that sound like they have a history, that belong to this world and were created there long before Sega opened us a window into it.

This soundtrack is a rare, relentless stream of wonder and invention that admits no moments of weakness. The music shares with the titular dragon his perpetual motion, always in flight. Like great film music, the score sounds like it's being generated at whim by the world within the game, a physiological, diegetic feature of its landscape. Like all the best music written for games, it doesn't sound like anything recognizable as game music — I don't know what it sounds like — but nonetheless could only have been shaped by the unique dramatic needs of a game. And only the world Sega made for Panzer Dragoon could have given voice to a score like this, and hoisted Kobayashi's inspiration to the top of the flagpole.

Lyrics
Shigeru Kurihara : Track 16
Album was composed by Саори Кобаяси / Ютака Минобэ and was released on December 21, 2002. Soundtrack consists of 18 tracks tracks with duration over about 60 minutes. Album was released by Marvelous Entertainment.