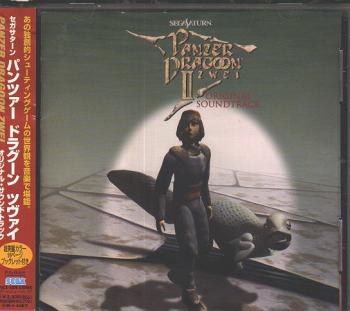 In the modern world of gaming, it is often hard to experience the joys that each individual console can bring its owners. Some people make a decision to stick to one gun, either out of expense, loyalty or even for the sake of simplicity, leaving the experience of what else is out there up to chance. Those who adopt such a policy usually find out years later they missed out on something truly special.

Growing up (and even now) this is the strategy I took, sticking with Nintendo through the 8- and 16-bit era and crossing over to ranks of Sony when the 32-64 and 128-bit machines were at the height of the industry. I always left Sega to its own devices even though everyone I knew had a Genesis and fewer still had a Saturn. However, thanks to my cousin's extreme and unrelenting loyalty to the Sega brand, I got to experience what is perhaps the one Sega series I was always envious of, possibly even more than Sonic the Hedgehog.

Even as I write this, I don't know what it was that initially attracted me to the Panzer Dragoon series: could it have been the beautiful worlds rich in fantasy and narrative? Was it the obvious similarities between it and Nintendo's Star Fox for the SNES? I doubt I'll ever come to know the answer, but whatever the reason one thing is clear to me: the music was undoubtedly a key part of the experience and that alone is reason enough.

When I first conjured up the idea to purchase this soundtrack, I was really only working with distant memories of the score. I could only remember a few pieces from a game I haven't seen or played in over 10 years. On top of this, I wanted my next soundtrack purchase to differentiate itself from my typical palette of game music. Needless to say, I got my wish.

"Bondage ~Main Theme~" opens up the disc with its very deceiving, almost playful feel. About halfway through the horns come into focus add that epic tone you would be expecting from anything dubbed as a main theme. However, when you really think about this track, it's rather interesting the composers choose to emphasize the mysterious / mystical aspects of the Dragoon world rather those that are dark and dreadful. While the main theme really shifts to this one side of this spectrum, most of the tracks walk the line walking between these two often conflicting "vibes", intertwines them into something that is definitely interesting, yet not exactly stellar or brilliant.

Shortly after the main theme "The Light of Legend" comes over the speakers and initially seems to be one of those rather typical hymn-infused numbers found in any number of video games and soundtracks. This standard feel is somewhat amended when the composers introduce a subdued version track number 12 "Ruins" into the mix at the midpoint. Still, even with this musical connection with a rather a piece it remains a little too stereotypical for its own good. The musical connectivity offered by this piece is undeniably important to the soundtrack as a whole, more so than the other pieces that attempt to make use of the same idea. The stage and boss themes follow suit and make up core of the album, with "Destiny Begins" filling the air with its brash, clunky sound and raw, flat beats. At first, this composition really doesn't seem offer much outside an abstract composition which can be rather unlikable, but nothing could be further from the truth once the horns kick in — one can literally imagine Lundi tromping though the fiery remains of his village on the back of his dragoon Lagi, dodging humongous boulders in the process.

Things clam down in the next level starting with "The Great Ravine," a pretty mellow piece that will teeter on the edge of mundane to most listeners despite being having some interesting instrumentation. Starting out innocently enough, "The Empire" quickly becomes the Panzer Dragoon equivalent of "The Imperial March" from Star Wars. It is obviously not in the same league as that piece, but that overwhelming feeling of "oh crap, this is bad" is there and works extremely well within the context of the game. "Flight" undoubtedly captures the feel of flying through the air during an aerial portion with some shallow and hollow sounding synth; again a little to stereotypical to stand out beyond stronger tunes. The second level finishes with "The Empire's Giant Carrier" a excellent boss theme thick with those deep, flat and fat beats coupled with a low, almost suspenseful yet un-suspenseful (is that even a word?) synth line reminiscent of a long, weary (yet fun) shootout with a mammoth battleship.

The soundtrack takes a real turn with "Forest of Taboo," which starts out rather oddly; it's almost as if the composition literally has to "power up" like Mega Man's mega buster before it runs its course (sorry for the wacky comparison there). While it is a full, thick sounding track with all the elements common to this score, there is enough of a solemn quality to it that mystical / natural aura is retained and not drowned by the percussion. It's pretty much a no-brainer such a track would play in a forest setting as it almost makes you forget you have and Lagi have a job to do. The majority of elements in "Forest of Taboo" come into play in the next boss theme "Hanuman". Like the previous boss theme, the composers again capture the behavior and temperament of the boss creature. Unfortunately, like a lot of the music on this disc, unless you have actually observed the Golia Hunter's hide-and-seek behavior firsthand in the game, you'll probably never know how well this piece complements the on-screen action.

"Ruins" takes the formula from above and runs with it in a more spirited and upbeat direction (unlike its first appearance within "The Light of Legend"); definitely a track most people will find to their liking on the first listen. I'm actually glad there are two versions of this track on the soundtrack that are quite different from each other. "An Attack from the Darkness" is another solitary piece that reverberates through the surrounding darkness before it links back into a small reprise portion of "Ruins," which fades into the big and bulky boss theme "Rando Doura". In what are probably some of the deepest beats used on the soundtrack, the message behind this number is loud and clear: you are in BIG trouble, have a seriously BIG fight on your hands with a VERY BIG and threatening creature. NO crap. Easily comes off as the most representative boss theme on the soundtrack as you don't need to play or see the game to come to this conclusion.

The next two tracks "Sea of Ice" and "A Conclusion" contain a similar, yet very peculiar element / event. "Sea of Ice" uses a percussion line that seems to emulate a beating heart. When you consider the rest of the track's instrumentation it's just a little odd, and it can actually be quite annoying — just like the level it played in. Speaking of annoying things, wait until you get to the first the fade in the middle of the track, only to have come back in full force and scare the hell out of you! You think the track is over but no, you're dead wrong! Haha. "A Conclusion" pulls the same trick at its halfway through it's duration as well, but it gives more of a warning when it comes back into focus from the fade. As it stands, the track is pretty befitting for the game's final episode, it honestly sounds like something you hear within the confines of an insane beehive — to listen will turn you into a mindless slave — but in good way (yeah, like that makes any kind of sense).

The final battle theme "The Unexpected Enemy" attempts to mix a techno echo beat (nice word play / combo there, 500 pts. for me!) with some ethnic sounding woodwinds. Despite managing to capture the fact you quest is nearing its conclusion, it doesn't stand well on it own — more so than some of the previous tracks. The fair yet passable game over music makes it appearance in "Requiem". It's not one of those game over themes you purposely kill yourself in the game to hear it (which is the ultimate test for rating any game over theme). The ending pieces "A Parting" and "Reminiscence" do their job in-game but again can't stand alone without any kind of visual aid or point of reference. "Lagi and Lundi ~ Theme of Zwei~" is a longer rendition of the main theme and marks the second musical connection between tracks.

In conclusion, this soundtrack isn't for everyone. Those who shy away from more abstract sounding compositions and tend to enjoy smoother, more continuous melodies and pieces will fail to find much to their liking. Additionally, some may find the recording quality a bit below their preferred preference. I myself am not too picky in this area (I don't know much about the Sega Saturn in regards to its sound capabilities) though I'm sure many will be turned off by the use of deep and almost flat sounding beats (I personally think it was an artistic decision and not due to hardware limitations). The price may also turn some away as well (a 10+ year old, 22 track, one disc OST that still runs around $30) unless they're the gambling type. Anyway, the music of Panzer Dragoon II Zwei is far from flawless, but it and the game definitely deserve more credit than it seems to receive. Worth a purchase if you're a fan or a peak if you're looking for something a little different.