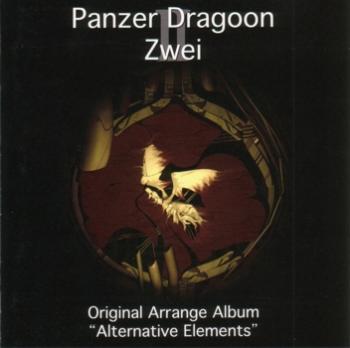 Panzer Dragoon II Zwei was sufficiently popular to receive both an original score and arranged album release. Of the two, the original score is by far the better release, but remains in my opinion the weakest soundtrack of the series. The arranged album takes 13 of the themes from the soundtrack, elaborates on them in certain ways, and presents them in resynthed form. While a simple concept, this approach isn't generally successful in either enhancing the imagery of the originals or creating a worthwhile stand-alone listening experience. In fact, the arranger responsible did not even bother to credit themselves in the album booklet.

The Zwei main theme was much less substantial than its predecessor in both length and atmosphere, but it still carried the potential for a striking orchestral arrangement. The initial buildup is good and there are both grand and ethereal moments in subsequent sections. However, the orchestration has an amateurish quality overall with sparse part-writing and weak synthesis, and several sections of the arrangement feel laboured. A similar atmospheric orchestral approach is taken in "The Great Ravine" and, despite initially capturing the magnitude of the setting, it quickly descends into very derivative and lifeless quasi-orchestral writing. In terms of creative and replay value, it certainly compares unfavourably to the original track.

That said, the arrangements that deviate from the orchestral focus tend to be well done. The hard funk influence of "Destiny Begins" is largely preserved in its arrangement here. Most notably, there is a fascinating contrast between the chaotic synth lines and the eventual grandiose trumpet parts. "Forest of Taboo" serves as an interlude from the more serious orchestral tracks, melding a lightly syncopated bass with occasionally expansive panpipe solos, while "Hanuman" is a more serious attempt at a new age track with some particularly contemplative moments. Of the rock tracks, "Ruins" satisfies as a 'feel good' theme and really brings out the most of the original, whereas "Sea of Ice" is a slow-building riff-focused theme that eventually becomes jarring because of its rhythm guitar synthesis.

Are there any orchestral additions that are worthwhile on the album? "Flight" is relatively inspired too. The majority of the arrangement offers a sedate classically-oriented interpretation of the original, but it eventually blooms into something altogether more striking and expressive. "The Empire" and "A Conclusion" also rank among the better ones, simply because their melodies are more commanding than others, but they still suffer from harmonic sterility and repetitiveness. Moving towards the conclusion, the surreal post-production interpretation of "The Unexpected Enemy" is interesting, but potentially unstomachable due to its opposing elements. The closer "Reminiscence" is more effective at rounding off the album, convincingly uniting the orchestral, rock, and electronic elements of the production, in a surprisingly melodically and rhythmically compelling mix.

The Panzer Dragoon Zwei Original Arrange Album - Alternative Elements did not work for me. I expect high production values in arranged albums, given they're no longer limited by their hardware, but this album fails to offer this and instead uses old and withered synth. Few were expecting a full orchestra from such a low budget production, but a lot better could have been offered. What's worse, the arrangements themselves generally lack creativity too. Far too few have the thoughtful development, harmonic ingenuity, and melodic exploration most would expect from arranged albums. What is offered instead are superficial ideas that rarely exceed the original material. While there are highlights here, they are modest ones and it's much better to stick with the original score instead.

Album was composed by Junko Shiratsu / Teruhiko Nakagawa / Tomonori Sawada / Yayoi Wachi and was released on April 20, 1996. Soundtrack consists of 12 tracks tracks with duration over about 55 minutes. Album was released by NEC Avenue.