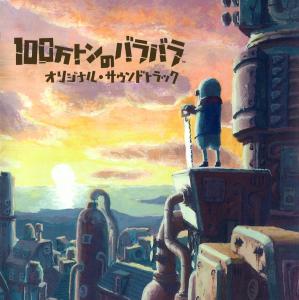 Released in early 2010, the Patchwork Heroes Original Soundtrack, scored by Hideki Sakamoto, contains music composed for the PSP's Patchwork Heroes (known in Japan as Hyakuman Ton no Barabara). The score is quite playful and whimsical — composed mainly of marches, focused heavily on brass, and influenced melodically in part by old European folk music. Does the playful style get jarring as the album progresses, or can the soundtrack stay fresh and interesting throughout its length?

The opening track, "Holding 1000000 Tons of Bravery -theme song-" is a perfect introduction to the album. Naoko Koyama's light voice accompanies the oftentimes intrusive (but never unpleasant) brass constantly punctuating in the background. Sections of the song are styled after European folk music, and this, along with the reliance on brass, sets the precedent quite successfully for what's to come. The song is actually quite enjoyable — bouncy and fun but never obnoxiously so.

I imagine the four 'Battleship' tracks to be accompaniment for various boss stages in the game, and each serves its own unique purpose melodically and stylistically. "The First Battleship" is the most easygoing of the bunch, though it still very much makes its presence known with blaring (sometimes atonal, always enjoyable) trumpets and pounding percussion. The melody is wacky and brings to mind some "Ring Battle" from Nobuo Uematsu's Hanjuku Hero works, though this piece is far more complex, as various brass instruments vie with each other for the limelight.

Considering the album's diversity, the 'mechanical' in "Mechanical Battleship" is handled wonderfully by the clunking mallet. This track is certainly tenser than the preceding, though it still retains a very similar light hearted feel. "Strange Battleship" is rather chromatic, adding an air of mystery to the familiar mix of brass and percussion. The trumpets build toward the conclusion quite dramatically, highlighting the apparent difficulties the heroes face with this particular battleship. Though even the tense, the dramatic atmosphere in this track compares to that felt in "The Last Battleship." Beautifully chromatic and epically silly, this track combines the typical 'last battle' type piece with the unique sound heard on this album, and it is lovely, if not a bit expected. The four "Critical Situation" tracks seem to be short accompaniments to their respective preceding 'battleship' tracks, and each offer a short, panicked reprise of the preceding.

There are a few sillier, more laid back tracks that sound like typical stage themes. The first, "Working Junk," starts with an absolutely addictive, fast paced theme on the trumpet. The second theme is simpler, though no less chromatic and atonal. The whole brass and percussion ensemble is here in full spades, as well. "Midair Great Patchwork" is a bit more even paced but no less rambunctious. Shouts of 'hey!' can be heard over the punctuated, staccato brass. "Imitation March" sounds quite European, even compared to the rest of the soundtrack. It's slower paced than the other two tracks, though no less engaging.

There are several gentler tracks. The two "Battleship Weather" tracks are variations of the same Middle Eastern sounding theme. The second of the two is one of the few tracks to not feature percussion, and it certainly makes a unique impact due to this. "Once Upon a Time in Town" sounds quite like a folk song due to the oboe. The tuba is rather silly, playing punctuated, staccato notes deep in the bass. "Working Junk" is a nice, easygoing track. The oboe and saxophone play a charming duet as the percussion marches on.

The ending theme, "Bye-bye Mr. Battleship -ending-," is quite a suitable ending theme, though not unexpected given the established sound on the album. Heavy brass, and marching percussion, here arranged in a closing, sweeping fashion. It works, but is otherwise not terribly noteworthy. The last track on the album, "Holding 1000000 Tons of Bravery -piano version-," is a rather delightful little arrangement of the game's vocal. It takes a while for the piece to start properly, due to a short speech given by Naoko Koyama in Japanese, but soon she takes the reins of the piano, arranging the melody and adding her own voice to the mix. It really is quite a delightful arrangement, and a most excellent way to end this unique album.

This album is extremely unique, though it is this very trait which will likely turn away a large number of potential listeners. There is a preponderance of brass and percussion, and the soundtrack is very much obnoxious, in a sense, considering how bouncy it is. There are also too few tracks of considerable length, and even those that are tend to get less development than they really need. But, there is a certain unique charm to the whole mix. While not all will care for it, those that appreciate a goofier, active, folk-inspired brass ensemble would find much to love.