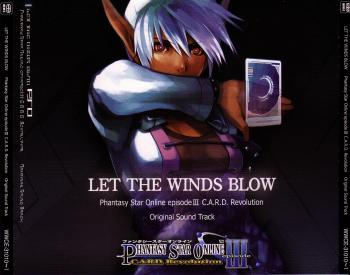 Phantasy Star Online Episode III: C.A.R.D Revolution was certainly controversial, but its soundtrack is perhaps the most ambitious in the series. Kenichi Tokoi took the lead this time to bring listeners both stunning orchestrations recorded in mainland Europe and elaborate stylistic experiments for the various stage and action themes. Nevertheless, series' veterans Hideaki Kobayashi and Fumie Kumatani contributed some eminent entries. The resultant score span an entire two discs and was lavishly presented in a commercial release by Wavemaster in 2003.

Phantasy Star Online Episode III immediately demonstrates its superior production values with Kenichi Tokoi's "Let The Winds Blow". The composition blends the vocals of the boy soprano Krzysztof Przygudzki with the grandiose performance of the Warsaw Philharmonic Orchestra. From a soft vocal solo, the entire orchestra gradually enters, culminating in both epic and haunting sections such as from 1:12, as well as more reflective interludes such as from 1:47. The final result is sheer bliss. For the actual opening of the game, the theme is remixed into an anthemic trance piece by Kenichi Tokoi. It's actually quite superficial compared to the other content of the soundtrack, but helps to bridge the gap between the orchestral and acoustic portions of the soundtrack. The Warsaw Philharmonic also returns at the end of the first disc to perform four short but affecting event themes, including the elegaic piano quintet "Deadlock" and the rousing fanfare "Courage".

Following the orchestral performances, the synthetic tracks immediately seem to lack something. Even with high quality synth of Sonic Team, they can't express the same humanity and drama as a full orchestra. Fortunately, Hideaki Kobayashi manages to compensate by offering dynamic and alien soundscapes through blending electronic and acoustic forces. A beautiful early example is the file select theme "Gate", combining resonant violin leads, contemplative piano lines, and a mixture of smooth and edgy beats into an entirely fulfulling creation. He keeps up the high quality with the peppy trance mix "Code" or the abstract and minimalistic "Tune". However, his highlight contribution is certainly "'IDOLA' The Strange Fruits" with its aggressive yet reflective, chaotic yet soothing qualities. It's a rival with Phantasy Star Online Episode IV's 'The Fanatic Viper' as the finest battle theme of the series.

Kenichi Tokoi and Fumie Kumatani are actually responsible for the various stage themes in Phantasy Star Online Episode III. Surprisingly, the music mostly deviates from the famous electro-acoustic sound of the series in favour of all sorts of stylistic experimentation occasionally reminiscent of mature Sonic compositions. Tokoi instantly diversifies things with his haunting Arabian-inspired accompaniment to "Nebula Montana", the bombastic orchestral dance "Tener Sinus", or even a dash of jazz in "Special Relaxies". Kumatani sticks more to the classic sound of the series, yet the ethereal piano focus of "Unguis Lapis" and dissonant orchestrations of "Ravum Aedes Sacra" are actually rather different from her earlier work. While these compositions don't strictly conform to the Phantasy Star Online sound, they're more than fitting for additional settings and still retain that distinctive alien yet personal tone of the series.

What's even better is that the stage themes have second action variations in the second half of the soundtrack and these tracks particularly give the composers a chance to reflect their more foreboding and aggressive sides. It's pretty remarkable how "Lupus Silva" has became so twisted or "Nebula Montana" has become so epic without losing the concept of the original themes or the score as a whole. There are a few brand new compositions on the second disc too, such as the collaborative techno mix "Cyber", the electrifying "Via Tubus", and a few light-hearted scenario themes. Following "The Strange Fruits", the album ends with the full version of Episode II's vocal theme "World With Me" and a recording of Episode I's "The Whole New World" featuring the expressive Tokyo Kosei Wind Orchestra. These tracks, along with a version of "Can Still See the Light", will be big highlights for fans of the main themes of the series.

Just as the Phantasy Star Online formula was beginning to sound tired, Phantasy Star Online Episode III came along to declare new inspirations for the series. Although the music here still fits the series, most themes divert from the typical hybrids in favour of other stylistic references across time and cultures. Furthermore, the production values are even higher than before and it appears a lot of attention was paid to each theme, even the menu and event themes. Even though it's for a spinoff title, the soundtrack release still has so much to offer that it is a near-definitive purchase for the series.