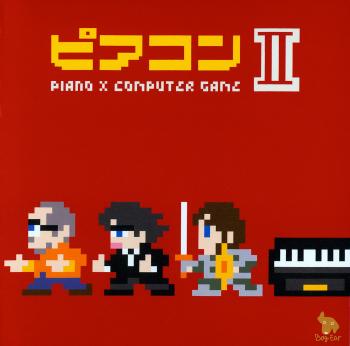 The Japanese piano virtuoso Keita Egusa is back one year later with a follow up to the stellar Pia-Com I, a CD featuring Famicom classics such as Mother, Yie-Ar Kung Fu, and Salamander arranged finely for piano. An even more lavish production that the first, Pia-Com II features 10 tracks in total, in comparison to the first album's seven tracks, and draws from a wider arrange of classic video games. Interpretations of Konami, Capcom, Hudson, Square, and Irem classics come together to create a well rounded offering. Furthermore, Keita Egusa isn't alone in his quest for classical representation of game music memories — this time romantic virtuoso Hiroyuki Nakayama and Capcom veteran Masato Kouda joined to form the Pia-Coms and both bring a good legacy and talent with them. Furthermore, the track list is considerably more robust this time around with Ghosts 'n Goblins, Final Fantasy III, Castlevania, Mystical Ninja, and Dragon Slayer IV standing out. But do the arrangements and performances also satisfy?

A large proportion of the album maintains the playful jazz and ragtime approach that Egusa developed on the first album. For instance, "OPA-OPA" captures the feeling of Fantasy Zone with its lively syncopated bass line and slightly eccentric improvisation, while maintaining a clear focus on the main melody throughout. "Spelunker" likewise is an enjoyable medley of themes from the IREM classic written in the old jazz style — the type that used to impress punters making requests at bars. The arrangement from Milon's Secret Castle also has a very nostalgic tone with its bright melodies and triple metre. Those who enjoyed Pia-Com I should find arrangements like these very accommodating.

In addition, listeners will also find some quite deep interpretations along the road this time. Returning from his role on the Kingdom Hearts Piano Collections, Hiroyuki Nakayama doesn't hesitate to bring heaps of passion and sentimentality to his balladic interpretation Final Fantasy III's "Elia, the Maiden of Water", one of my all-time favourite interpretations of the theme. Wizardry's "Opening Theme" evokes even more bittersweet feelings than the others due to the recent demise of its composer Kentaro Haneda. Given the nature of the original, this arrangement is convincingly written in a Baroque style — featuring formal presentations of the melody, gorgeous harmonisations and decorations, and even a section written as a fugue.

I was particularly impressed with the interpretations of Capcom and Konami's classics here, which receive two nods each. Masato Kouda's interpretation of Castlevania's "Vampire Killer" sounds particularly fresh, despite being a very theme to arrange, thanks to the wonderful jazz bass and the small liberties taken. The guest arranger also does a good job retaining the military essence of one of the scores created by his former company, Capcom, for Commando. Also from Capcom, Ghosts 'n Goblins' main theme also sounds better than ever in its rendition here. Nakayama retains the pastiche feel of the original melody while offering dramatic weight inspired the great romantic pianists, culminating in a particularly rousing cadenza around the 2:52 mark.

By far the best track, in my opinion, is one found near the end of the album — that of Ganbare Goemon, Konami's loveable ninja that is sadly today a mere memory in old gamers' heart. The arrangement blends a near stereotypical interpretation of the oriental source material with musicality more typical of Western convention. Hiroyuki Nakayama's show-stealing performance of this particular track is especially impressive and, despite all the complicated changes in tempo and harmony, remains exciting and hard-hitting throughout. The album is appropriately led out by Keita Egusa with a thoughtful medley of themes from the Falcom classic Dragon Slayer IV.

Featuring a wide variety of games and approaches, all the tracks feel fresh, well executed, and, depending on the age and background of the listeners, very familiar too. But whether you played these games or not, the music here is strong enough to win over even the most jaded by being a treasure in itself. The only criticism is that some may find the more lavish tracks by Hiroyuki Nakayama too much of a contrast with the more straightforward approach of Keita Egusa, though I personally appreciate the — each track sounds distinct in its own way, with no interpretation ending up sounding redundant or worn out. If Pia-Com III comes along, then consider me excited and the first to pre-order, because Pia-Com is now a series with true weight to it.