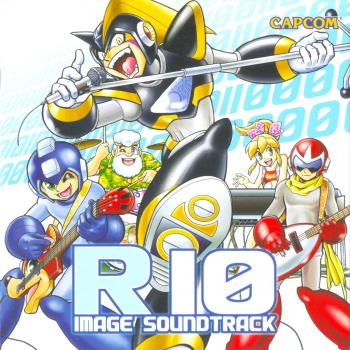 Similar to the Rockman 9 Arrange Album, the Rockman 10 Image Soundtrack contains arrangements by III as well as by guest arrangers. Many of the guest composers from the original soundtrack return to arrange their own themes, sometimes with help, sometimes by themselves, or in the case of Fujii, not at all. However, arrangers from later Mega Man series are also present, such as Yoshino Aoki, Masato Kouda, and Seiko Kobuchi. The Rockman 9 Arrange Album came out with mixed reviews, and although I was quite fond of it, some of the arrangement styles did seem to alienate hardcore Rockman fans. From what I've read so far about this album, it seems to be polarizing as well, but I also found it enjoyable. Was it as good as the Rockman 9 Arrange Album?

I'll start with the robot master themes, as a lot of the variety is found within these themes. "King of Blades" is arranged by Akari Kaida, who also composed the original, and she gives it a very interesting treatment. At times, you'll hear an orchestral focus with some electronic accompaniment, while at others you'll hear a more rock-oriented approach. It's a great take on the original, which was one of my favorites from the original soundtrack, and really brings the original to life. I am particularly in love with the delicate piano bridge that Kaida adds to the theme. "Polluted Pump," arranged by Yuko Takehara and Ryo Kawakami and originally composed by the former, features an interesting soundscape as well. Synth leads that imitate a saxophone are combined with some interesting percussion usage. As the theme develops, though, it gets progressively darker, with water effects and a very atmospheric and mysterious approach, before reverting back to the original style. It's quite the fun theme!

"Desert Commando," arranged by Saori Utsumi and originally composed by Minae Fujii, is easily one of my favorite arrangements on the album. It's got a fantastic ethnic flair with a rock touch that really brings the original to life. In particularly, the various exotic strings used help really accentuate the atmosphere and the beat that accompanies it is very fitting. I'm surprised that Fujii-san didn't help arrange anything on the album, but the original was in good hands with this surprise returnee. "Absolute Chill, arranged by Shusaku Uchiyama, who also composed the original, brings a style one might hear from his Mega Man 8 soundtrack. It really captures the essence of an ice-themed composition with slick synth usage, captivating piano work, and great accompanying beats. Overall, this theme definitely improves upon the original and is definitely a treat to listen to.

"Cybersheep's Dream" — arranged by Mari Yamaguchi, who composed the original, and Tsutomu Kurihara, who serves as the guitarist for this arrangement — is an interesting fusion that manages to give the original a nice rock edge, yet at the same time, keep the dreamy qualities of the original intact. There are some great moments in it as well, such as the keyboard solos, and the live guitar work. "Fireball Strike" is arranged by Makoto Tomozawa, who composed the original. This theme had a lot to do in order to impress me, given that I thought the original was the least inspired of the robot master stage themes. Throughout the arrangement, there are crowd/stadium cheerings, which are a bit of an odd choice, and the use of live saxophone is a plus. It's an enjoyable theme with a very nice saxophone and guitar solo and manages to make the original more enjoyable to me.

"Nitro Rider," arranged by Manami Matsumae, who composed the original, manages to kick butt once more, proving she is the mother of Rockman music. It's an extremely upbeat version of the original with some slick guitar sections, some delicious synth melody lines and I love the progression of the overall theme. It varies between the synth and rock often enough to keep it interesting. Lastly, "Solar Inferno," arranged by Yasuaki Fujita, who composed the original, manages to really bring out the intended atmosphere of the original with his grunge rock arrangement. Wailing guitars,awesome guitar riffs, great synth sections, a bit of an industrial flair, and an awesome solo really make this quite the energetic theme. Sure, it's all synthesized, but it's still very entertaining nonetheless.

There are also a few miscellaneous themes. "For You," arranged by Hiroki Isogai, who composed the original, offers the biggest surprise on the album with his pop rendition of the original. Beautiful piano and violin work really give this one a very delicate, yet upbeat, nature that fits the character of Roll. The violin solo, however, is absolutely stunning and the main reason this. "Boss," arranged by Hiroki Isogai, who composed the original, adds a nice synth rock vibe to it with some nice industrial beats. I thought the original boss theme was much weaker than the Mega Man 9 counterpart, but this version really manages to bring the theme to life. Lots of layering and full of guitar riffs, it's an interesting take on the original. Ippo Yamada's sole arrangement, "Dr. Wily Stage Boss," originally composed by Hiroki Isogai and Ippo Yamada, is quite varied in execution. At times, it takes on a playful atmosphere with a bit of a rock influence, while at others, a more industrial approach with some ethereal synth is taken. Overall, it's a decent theme but the lack of cohesion might put some people off.

Lastly, the Wily Castle themes feature some of the best arrangements on the album. "Abandoned Memory," arranged by Hiroki Isogai, combines "Silent Rain," composed by Ippo Yamada and "Abandoned Memory," composed by Hiroki Isogai. The opening has a very atmospheric, industrial vibe to it, before moving onto the main attraction, the synth rock version of "Abandoned Memory." It features some great guitar work, some awesome synth lines, and some great keyboard work. "Against the Pressure," arranged and composed by Ryo Kawakami, is another synth rock take on the original music. The guitar work by Masaki Suzuki is what really makes this arrangement shine, especially the killer guitar solo. The mixture between synth and guitar makes for a nice varied listen, although some may have preferred the synth to be taken out entirely. "No Turning Back," arranged by Seiko Kobuchi and originally composed by Ryo Kawakami, is another great synth rock theme with some fantastic keyboard work giving the overall theme quite a jazzy nature, and some interesting accompanying harmonies. It's a fitting return to the Rockman series for Kobuchi.

Lastly, some of the biggest surprises come from Masato Kouda and Yoshino Aoki. "Close to the End," arranged by Masato Kouda and originally composed by Hiroki Isogai and Ryo Kawakami, combines "Stairway to the Darkness" and "Wily Machine." The former is a groovy rock rendition with some slick beats, some great guitar work, and synth lines. The latter half, "Wily Machine," is a classy jazzy rendition of the original. The piano work is especially great and shows why Kouda is a fantastic composer and arranger. "Nemesisphere," arranged by Yoshino Aoki and originally composed by Ryo Kawakami, combines "Deep in Space" and "Dr. Wily's Capsule." The first half of the arrangement is a very spacey, futuristic take on "Deep in Space," and manages to combine a nice beat with some more airy synthesizer work. The "Dr. Wily's Capsule" section combines some fantastic electronic beats with some more synthesizer work that really manages to capture a more sinister nature. A nice surprise is the screeching guitar that is thrown into the mix on occasion. Yoshino Aoki really knocked this one out of the park!

Overall, I think that the Rockman 10 Image Soundtrack features a lot of great arrangements. Although some people may complain about the sound quality, I think the arranged material, for the most part, manages to stand strong. Sometimes taking unexpected turns, such as Kouda's arrangement, or reinforcing the original intent, such Fujita's arrangement, it manages to create a variety of styles that manage to capture the essence of the original, and although some don't succeed as well as others, it's still a valiant effort as there is usually something enjoyable in every arrangement.

Track 4 - King Of Blades
Composed and Arranged by: Akari Kaida

Track 14 - For You
Composed and Arranged by: Hiroki Isogai
Violin by: Yuko Tokushima

Track 16 - Against The Pressure
Composed and Arranged by: Ryo Kawakami
Guitar by: Masaki Suzuki

Track 17 - No Turning Back
Composed by: Ryo Kawakami
Arranged by: Seiko Kobuchi