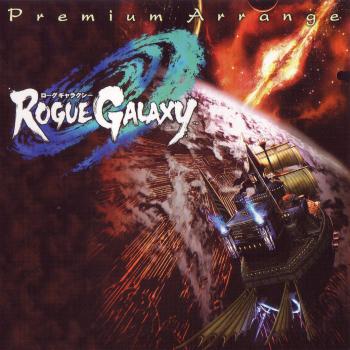 The controversial Premium Arrange series has had a lot of trouble in the past to impress a large audience. Both the Phantasy Star Online and Dark Cloud arranged album had an all-star cast of composers and arrangers, but some people weren't satisfied with the quality of the arrangements. Rogue Galaxy Premium Arrange, the latest addition, isn't much different to previous installments in its concept. It featured very prominent arrangers and had source material based on Level 5 composer Tomohito Nishiura. Many former and veteran contributors, namely Yasunori Mitsuda, Kenji Ito, Takayuki Aihara, Nobuyoshi Sano, Shinji Hosoe, Yoko Shimomura, Motoi Sakuraba, and Noriyuki Iwadare, returned to help build the album. In addition, two newcomers Yoshitaka Hirota and Norihiko Hibino add a fresh layer to the albums special diversity characteristic. But does it live up to or surpass other albums in the series?

A main theme should exemplify the piece of media it stands for. Yet while Tomohito Nishiura's drab orchestral theme for the original game didn't really achieve this, Yasunori Mitsuda arranges it in this piece to achieve a new standard of creative excellence. Influenced by his hit Celtic approach, Mitsuda leads the arrangement on acoustic guitar in a natural and expressive way. The seamless strings interpret the main melodic line from the rustic rhythmic accompaniment. There are also many elaborations during the development, including a science-fiction synth section at the 1:57 mark and an elegant piano solo prior to the powerful recapitulation. The science-fiction sound influence is emphasised more in Shinji Hosoe's arrangement, "Planet Zelard", which elegantly blends acoustic instrumentation with electronic effects. In this arrangement, Hosoe has kept the supportive baseline nearly the same, making minor changes here and there, and the melody is also quite noticeable as a motif. The composer brings the track a long way from fairly interesting beginning all the way to the atmospheric orchestral climax. While not particularly complex, it completely outdoes the original with its subtle and tasteful choices.

Among more action-packed tracks are the contributions by Yoko Shimomura and Motoi Sakuraba. Shimomura's "The Crisis" builds on the basso ostinato of the original to give a much grander scope. The ostinato sounds much more compelling than before thanks in parts to its more impressive sound quality — with solo violin parts and high quality orchestral samples — and also its punctuation alongside other fragments in a rhythmic way. But it's the way the track builds from its simple ominous introduction towards an epic climax that is bound to yield the attention of stand-alone listeners. While this track is still restrained in its volume and tempo, Sakuraba's "Varkogu's Theme" is nothing short of explosive. An example of his progressive rock work at its most intense, the track is completely dominated by virtuosic passages and solos by keyboards and rock organ. Sakuraba cleverly harnesses all sections of the original, tranposing even those awkward brass and string sections on to rock instrumentation. The final track has such a jagged and dissonant feel that it will overwhelm some, but those that enjoy this sort of track will surely find it an adrenaline-pumping masterwork.

Perhaps the most atmospheric addition to the album is Takayuki Aihara's "The Labyrinth". Aihara exceeds Nishiura's inspired but unpolished original with a deep two-tiered science-fiction orchestration. The opening of the piece is eerie and maddening with its tranquil small ensemble orchestration, focused particularly on a distorted flute. The transition between the mystifying to exciting section is almost flawless. Aihara really knows how to control the piece, as the energy is always up to peak whether it's in the calm stage or the action phase. A further track of note is Nobuyoshi Sano's "Brave Heart". His work is once again very experimental, even if not quite as zany as his past arrangement of "Jungle". Many people may feel this track is monotonous and incomparable to the less-than-incredible original, but the real beauty behind it is the consistency of the development and minimalism. The set-up as only around three electronic 'instruments' — the steady beat, the background noise and the synthesizer — and he creates his famous looping technique while constantly altering the sound. Not all will enjoy it, but it's pretty fresh and exciting.

If I were to choose one composer who completely caught me off guard in this album, it would be no other than Norihiko Hibino. I was surprised at the original "The Ghost Ship", one of the few Nishiura themes which were inspiring, yet Hibino expresses his personal style using very little basis of the original's ambient but pleasant melody. The arrangement is bookended by some hard-hitting science-fiction sections blending dark cinematic influences with wicked saxophone improvisations. However, at the 1:31 mark, it moves into into a acid jazz piece sung by Akashi's harario. While much lighter than the rest of the arrangement, the mysterious lyrics, ominous suspensions, and ethereal sections maintain the concept. Overall, a very accomplished addition. The second new face in the Premium Arrange series is Shadow Hearts series main composer, Yoshitaka Hirota. Here he goes for an addictive industrial grunge track reminiscent of his Shadow Hearts works. While the arrangement is quite simple in its elements, it manages to captivate listeners due to its emotional development. Kyoko Kishikawa's chanting is the main highlight, bringing so much humanity to the once dreary melody, while Hirota's bass punctuates the track in an idiosyncratic way. Another powerful experiment.

There are a few arrangements on the album that aren't as awe-inspiring as the others, but hardly bad. Kenji Ito goes some way to redeem himself from his previous arrangements with his interpretation of "The Castle in the Air". The arrangement isn't transformative by any means, mainly presenting the orchestral original in a more intimate acoustic arrangement. However, the melody is quite beautiful and its nuances are emphasised by the mature arrangement. The arrangement is one of the weaker numbers in terms of creativity, but is one of the few that will appeal to those looking for a relatively faithful interpretation of the original music. Finally, Noriyuki Iwadare presents the vocal ending theme "Dreaming My Way Home" with an instrumental arrangement. Iwadare follows the melodic structure closely, though the melody sounds somewhat less expressive on the solo flute and oboe here. Thankfully, the orchestration is more elaborate in this case and there are some great elaborations during the development. Reflecting his style, the greatest part is in the middle of the finale when the electric guitar blows everything else over as a final cry for sensation.

I really didn't expect this album to be bad (with all the talent, how could it be?), but I really didn't expect that it would contain quite so many excellent arrangements either. Again, like all other chapters, the Rogue Galaxy Premium Arrange provides and hosts a wide variety of styles, from the dramatic orchestrations of "The Labyrinth", to the exotic vocal murmurings of "Enormous Threat", to the synth rock insanity of "Varkogu's Theme", thankfully all who try and demonstrate their best in the field. There were no mediocre arrangements this time round, although Ito and Iwadare's tracks weren't up to the set standards by the other composers, although some others may be too transformative for some. The question remains whether you will enjoy this album, and the solid answer is yes, especially those who enjoyed the Dark Chronicle Premium Arrange.

1. THE THEME OF ROGUE GALAXY

3. THE CASTLE IN THE AIR

Arranged & Mix by Noriyuki Iwadare
Album was composed by Tomohito Nishiura and was released on January 25, 2006. Soundtrack consists of 10 tracks tracks with duration over about 55 minutes. Album was released by Team Entertainment.