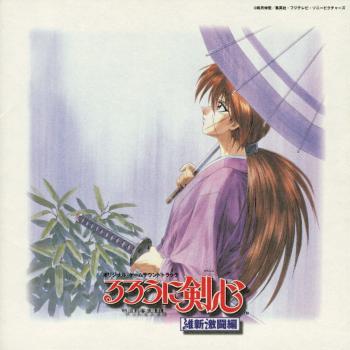 The Rurouni Kenshin series of anime titles received two video game spinoffs during its vintage, one a fighting game, the other RPG. Noriyuki Asakura returned to create mostly new soundtracks for both titles. The composer suitably blended the series' more traditional sound with action-packed contemporary influences on the fighting game Rurouni Kenshin: Meiji Restoration Edition. However, the music isn't particularly fulfilling as a whole.

The majority of the stage themes for the game are fusion tracks somewhat reminiscent of Noriyuki Asakura's approach on Crime Crackers. Listeners can enjoy blends of traditional Japanese instruments with contemporary jazz, electronic, and rock elements on tracks such as "Riverbed", "Forest Road", and "Kamitani Dojo". They're all quite catchy with their frivolous phrasing, though lack in terms of development and could have been implemented better. Asakura reserves the harder fusions for "Dance Hall" and "Hajime Saito", both of which have plenty of rhythmical and timbral thrust.

The rest of the soundtrack is mostly comprised of supplementary music. Both ending themes are highly repetitive and don't bring anything to the overall experinece. They're followed by a succession of effective but short fairly. More impressive is "Finale" with its elevated gothic-tinged orchestration, though it is oddly placed at the start of the soundtrack. "Parting" is also quite emotional with its blend of piano wanderings and suspended strings, though admittedly very typical once again.

While most of the music on the soundtrack is original, anime lovers should note that the soundtrack is sandwiched together by instrumental arrangements of the series' classic "Who Are You Protecting?". There are also two vocal themes at the end of the soundtrack. "Freckles" is a pretty typical J-Pop theme with youthful female vocals and buoyant accompaniment. T.M. Revolution's "Heart of Sword ~Before Dawn~" is more impressive with its charismatic vocals and elaborate solos. It's pretty representative of the band's sound and will satisfy most young J-Rockers out there.

There are plenty of catchy tracks and powerful fusions on Rurouni Kenshin's fighting soundtrack. However, the tracks simply aren't sufficiently developed or numerous to make the overall soundtrack a fulfilling listen. Only those who are major fans of the Rurouni Kenshin series should be interested in this soundtrack. However, such fans should also note the existence of a rather expensive twelve disc box set featuring all the series' animation albums as well.