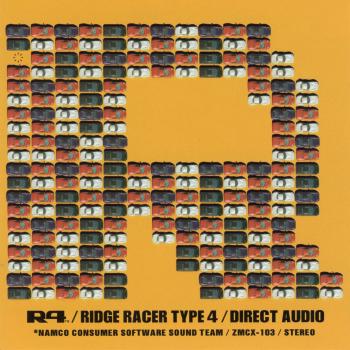 Ridge Racer Type 4 Direct Audio represented a major change in musical direction for the series. Gone are the hardcore beats of Shinji Hosoe and friends in favour of progressive chillout grooves and jazz pieces created by Hiroshi Okubo and co-workers. The change in style had a profound effect on the gameplay, ensuring music enhanced the atmospheric and scenic feel of racing in the game instead of focusing on the hardcore action. The soundtrack was also gloriously received on a stand-alone basis for the first time in the series and really captured listener's emotions. Let's take a closer look at what is offered...

For the first time in the series, Ridge Racer Type 4 features a clear main theme in the form of the acid jazz song "Ridge Racer -one more win-". Ideally suited for the theme, Kimara Lovelace's vocals are some of the most distinctive and sensual in game music; she interprets the melody with so much passion and brings a lot of meaning to the lyrics, even with their racing references. A smooth backing is created by soprano saxophone wails, string countermelodies, and funky synth pads. Though it takes a lot of risks, the theme sounds fantastic on a stand-alone basis and is a surreal accompaniment to the staff roll in the game. It is given numerous arrangements during the soundtrack, several of which are simple instrumental variations for the game's menus. More notably, Kota Takahashi's opening theme "Urban Fragments" features a more sassy and cinematic interpretation whereas Hiroshi Okubo's "Movin' in Circles" is a psychadelic trance remix that powerfully accompanies a climactic race.

Asuka Sakai's instrumental compositions have a very soothing feeling to them with an elegant blend of focal features and underlying synth motifs. In terms of focal points, she is bound to inspire more sensual feelings with the rich violin melodies of "Garage Talk" or the electric piano focus of "Your Vibes". Her synth motifs tend to have an minimalistic yet eccentric quality about them, perhaps inspired by Nobuyoshi Sano, yet are rarely penetrating. However, she also occasionally surprises, such as by building up a complex drum 'n bass cross-rhythms in "Silhouette Dance" or eventually adding enpowering string-based sections to "Your Vibes". In "Quiet Curves", Sakai collaborates with Okubo to bring a theme as tantalising as the title suggests; while many of the stylistic elements are continuous here, the composer's jazz improvisations on a recorded piano performance brings a whole new human touch. Although short, her "Epilogue" theme is quite an interesting synth jazz reflection too. Overall, Sakai's contributions are integral to defining the surreal mood of the game, yet she ensures things are still varied and stimulating.

Though the score's most prolific composer, Hiroshi Okubo only makes a few particularly notable compositions. In particular, "Burnin' Rubber" and "Pearl Blue Soul" are each unusual and contrasting perspectives on funk music — the former an exciting stage theme filled with potent flute and flute leads, the latter dominated by slow-building saxophone figures and ascending synth motifs. That said, Okubo is also responsible for some more repetitive additions such as "On Your Way" and "Spiral Ahead", which provide easy yet uninspiring stand-alone listens. These themes were created to accompany various menus in the game, so it's understandable and appropriate that they lack much musical development. Much the same applies to his short final additions "Ready to Roll!" and "Party's Over". Note that "Eat'Em Up" is a bonus track that blends Pac-Man's warbling sound effects with silly melodies and hyperactive beats. It's a total misfit from the rest of the album, but doesn't cause any harm either since it is featured at the very end.

Several other contributors round off the musically diverse Ridge Racer Type 4 score. Kota Takahashi's "Naked Glow" is probably the most conventionally funk-influenced track, though one of the diverse and catchy too. It's definitely my personal favourite of the score. Determined to make an impact with all his contributions, Takahashi brings breakbeats, rhythm guitars, and electronic distortion into "The Ride", while blending smooth and rough in the fascinating "Move Me". Following his work on Ace Combat 3, Tetsukazu Nakanishi doesn't hesitate to introduce some of the more dynamic stage themes of the score, "Lucid Rhythms" and "Motor Species"; both are given the techno treatment, but the former is more akin to Sakai's efforts with its increasing acoustic piano use, whereas the latter hearkens back to Ridge Racer 2 with its dissonant leads and industrial beats. Lesser-known Namco employee Koji Nakagawa also made two electronically-oriented compositions, the minimalistic ambient track "Thru" and the comparatively raving "The Objective". While not among the highlights, they're both high quality efforts.

After an abrasive start for the series, the Ridge Racer Type 4 Direct Audio turned tradition on its head in favour of a smooth and subtle score. It was a very progressive effort and few racing soundtracks quite stimulate senses and sooth minds like this one. The composers managed to give the soundtrack a sensual feel and sassy edge while keeping the racing feel alive and avoiding the clichés of most such music. Even ignoring the intricacies within the particular compositions, there is also a considerable diversity in the musical styles featured in the soundtrack, ranging from acid jazz, chillout, funk, techno, and rock. Pretty much every composition fulfils its role in the game and all the more developed themes are stand-alone themes. If you enjoy relaxing electronic music or liked the game score, this soundtrack is a must-have.