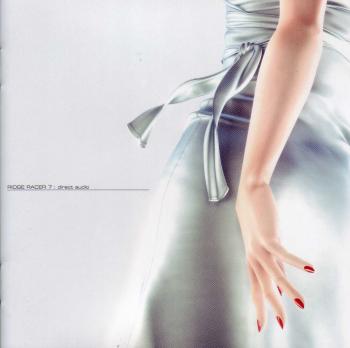 The Ridge Racer 7 Direct Audio soundtrack is an accompaniment to the latest in the Ridge Racer series. Mainly composed by members of Nanosounds, it also features guest compositions by SuperSweep and ESTi. I found Ridge Racer 6 Direct Audio to be an extremely entertaining listen, but how does this sequel stack up? Not so well I'm afraid...

I don't like to start my reviews off negatively, if I can avoid it, but unfortunately, much of this soundtrack suffers from a few things. First off, many of the tracks push the six minute mark. This wouldn't normally be a problem, but many of the themes, most on the first disc, tend to drone on and on, with very little variation within their themes. Even promising themes like Hiroshi Okubo's atmospheric opener "Meet the World" or Ryuichi Takada's beautifully soundscaped "Saturation" are extended to an unnecessary seven minutes. Most others fail from the outset due to uninteresting core ideas, such as Nobuyoshi Sano's "Hard Drive, Yu Miyake's "Electro Madness", Akitaka Toyama's "Turn Me On", and Rio Hamamoto's appropriately named "Beat Assassination". This makes for a very monotonous listen. I struggled to get through the first disc, in all honesty. It may work well in game, since there are sound effects that may help add to the atmosphere of the music, but on its own, it's a very hard listen.

The first disc, while extremely underwhelming, did manage to have a single track that I found deviated from the monotony. Composed by Shinji Hosoe under his Sampling Masters MEGA alias, "Combustion" is a driving piece of electronica that features a ton of variation throughout its entire duration. At times, you'll hear some more industrial techno influences that take the lead, while at others you'll hear some slight rock influences. In the end, the variation is what really makes this theme worth listening to. Unlike many of the themes on disc one, this one never gets boring and reminds me of Ridge Racer 6. Continuing with Hosoe's other contribution on the second disc, "Listen Up!," it's another theme that throws a lot of different ideas out there. I find it to be weaker than "Combustion," but the more futuristic sound and a pretty decent melody help make this theme pretty tolerable with some more crazy sections to mix things up a bit.

The second disc features many other compositions that I find to be more enjoyable although they're from the guest composers rather than Namco team. Ayako Saso, composing under her Sampling Masters AYA moniker, contributes "Shut Up Baby" and "Nitro Witch" on the second disc. The first is a fun little theme that reminds me a bit of a club theme. It has a pretty catchy rhythm and some interesting synth effects, although it does tend to get a little monotonous at times. Fortunately, there are a variety of sections in the theme, so you aren't listening to the same thing for the entire duration. Her second theme, "Nitro Witch," is her strongest theme on the soundtrack. Reminiscent of "Nitro Mantra" from the Ridge Racer 6 Direct Audio, this is Saso in her "crazy" phase. With some interesting vocal work and a driving rhythm, she manages to blend together a variety of styles including some more industrial sounds, some more trance-like influences, and some slight ethnic influences. It's a crazy ride and is probably more varied than any other theme on the soundtrack.

ESTi's "Kaleidoscope" is an entertaining fusion of electronica and a more Arabian soundscape. While this one doesn't vary as much as some of the other themes on the soundtrack, the engaging melody is unique to the soundtrack and makes it a much more tolerable piece of music. Lastly, I'll mention Hiroshi Okubo. While most of his contributions I couldn't really stomach, there were a couple that are worth mentioning. The first, "Calm," is a mellow jazzy theme with some subtle electronica undertones. There are also some interesting use of sound effects, just as waves crashing and birds calling. It's a very relaxing theme that differs greatly from the rest of the soundtrack. The other piece, "Eat the World," closes the soundtrack combines a pulsating electronica beat with something akin to a player piano and some chiptune effects. In the end, it's one of the more interesting themes from the Nanosounds side and I think closes off the soundtrack nicely. Given weaker tracks like "Orbital Rock" and "M.T.T.B", I only wish Okubo was a bit more consistent on this soundtrack.

Honestly, I was not a big fan of this soundtrack. The members from SuperSweep and ESTi created the most engaging themes, in my opinion, while major composer Okubo was rather hit or miss. My biggest gripe with this album is the extreme monotony heard in many of the themes. There didn't seem to be much effort put into it and many tracks sound like they were composed with a "create a driving rhythm and stick with that" mentality. Unfortunately, it really didn't work out. If you really liked the music you heard while playing this game, I don't see why you shouldn't purchase it, but if you planned on listening to it because you liked Ridge Racer 6 Direct Audio, I suggest you save your money and look elsewhere.