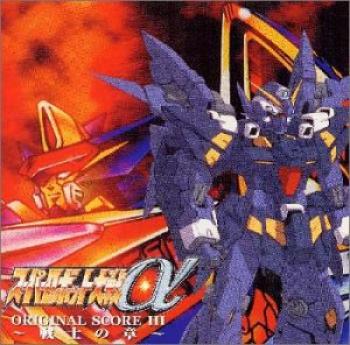 Super Robot Taisen Alpha is the first game in the second generation of Banpresto's robot saga, originally released for the PlayStation in 2000. As a result of the strong sales and iconic nature of the game, there were multiple albums released featuring music from the game, but none of those were complete on their own. While incomplete on their own, the trilogy of 'Original Score' albums provide the most satisfying stand-alone listens, due to their emphasis on the original instrumental and vocal compositions for the game that far exceed the thankfully omitted mecha theme song arrangements. Let's take a look at the conclusion of the trilogy...

The majority of the tracks in the album were featured in earlier chapters of the trilogy, albeit in different forms. The opening track, "Enraged Spirits!!", for instance is an instrumental arrangement of Koji Hayama's theme song that opened the first chapter. While it has a charismatic melody, hard beats, and atmospheric soundscapes, the repeated voice samples are quite annoying, just like in the original. An even less satisfying instrumental rendition at the album is "Brother in Arms"; as this is a karaoke track, it sounds completely hollow with no vocalist or instrument interpreting the melody. At least the various instrumental renditions of character theme songs, such as the upbeat "Scirocco! Gale! Cybuster", youthful "Flapper Girl", and gothic "Dark Prison", capture the glory of their melodies.

In the opposite direction, there are a few vocal renditions of instrumental tracks that appeared earlier on the trilogy. Fan favourites "Vanishing Trooper" and "Ace Attacker" receive upbeat arrangements that emphasis the strength of their melodies. Whereas Hironobu Kageyama brings his characteristic rock spirit to the former, the latter is actually dominated by fairly mellow female vocals. Both are select tastes, but are decent overall. Ichiro Mizuki makes his final contribution to Super Robot Taisen Alpha with an interpretation of "My Rival". His quasi-operatic vocals intersynch fairly well with the light jazz-rock accompaniment. However, the melody doesn't entirely fit his voice like most anime theme songs in the past.

There are a number of original compositions here, however. "Banquet of Despair", for instance, is a fascinating fusion battle theme featuring everything from thrashing guitar riffs, to epic string passages, horror-style piano writing. It's chilling both in and out of context. Many of the other exclusives are short compositions that aren't particularly worthy of attention. However, at least the conclusion of the album brings the goods with the epic rock-orchestral action theme "The Arrow of Destiny" that is among the best of the series. "The Universe in Eternal Harmony..." finishes the album on a triumphant note with a stable anthemic orchestration. As the title implies, it is a wonderful way to unify and round off the trilogy both stylistically and thematically.

Aside the concluding tracks, Super Robot Taisen Alpha Original Score III ~Soldier Chapter~ does feel a bit supplementary. The majority of the album is comprised of mediocre to above average instrumental or vocal renditions of tracks that appeared earlier in the franchise. However, the climactic orchestrations are so excellent that the album may still be worthwhile for dedicated collectors.