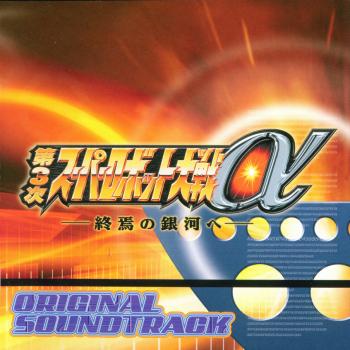 In 2005, Banpresto finished a trilogy of mech battling games in style with 3rd Super Robot Taisen Alpha: The End of the Galaxy. A team led by Takuya Hanaoka put all their effort into the soundtrack for the game, creating a humungous 141 tracks in total. Offering a mixture of original vocal themes, anime and classic arrangements, and brand new instrumental compositions, the soundtrack spans a very diverse range of mood, styles, and material. Does it provide the definitive end the subseries deserves?

Once again, JAM Project headline the soundtrack for 3rd Super Robot Taisen Alpha with two theme songs. The opening theme "Gong" is only presented in a short version on this release and listeners will have to check out their single or vocal compilation to hear the full version. What's offered here is promising, combining melodramatic vocal passages with elevating rock and orchestral accompaniment. In fact, it is highly reminiscent of some of the music of Malice Mizer. The ending theme is also shortened here, but the two minutes provided are still quite wholesome. Another typical JAM Project song, it opens in a balladic format with soft female vocals and unobstrusive new age instrumentals, before moving into a more motivating ensemble passage. Overall, a special way to end the game.

In terms of quality, there isn't always a significant improvement in the intricacy of the arrangements or the quality of the synth since 2nd Super Robot Taisen 2nd. The ensemble brass sound used to interpret the melodies on most of the Mazinger and Getter Robo selections is as obnoxious as ever and pales to Ichiro Mizuki's performances on the vocal collections. However, at least all these tracks have been resynthed this time to attain a consistent quality, after their mixed treatment earlier in the franchise. Plenty of the other selections on the first disc adhere to typical mecha anime tradition, such as the additions from Yoshiyuki Tomino's numerous animes or Tadao Nagahama's Robot Romance Trilogy. They deserve a place on the game and soundtrack, given their historical importance, but are still quite blaring and superficial.

Thankfully, the anime selection extends beyond these staples into quite a few other series that offer a wider range of music. The Gundam selection is a diverse bunch, encompassing dramatic orchestral epics like Z's "Fleet Battle" and electrifying action themes like Seed's "Gundam Sortie", between the more typical pieces. Much of the second disc of the album is dedicated to Macross 7's soundtrack and tracks such as "Try Again", "My Friends", and "Planet Dance" bring a more mainstream-targeted rock sound to the album, while still having an upbeat and catchy aura. The King of Braves GaoGaiGar also receives a generous commemoration and Kohei Tanaka's orchestral compositions like "Dividing Driver" are easily among the most serious and impacting on the soundtrack. There's even a surprise dedication to Sega's Virtual-On series at the end too.

The last two discs of the soundtrack are dedicated to the original music that Takuya Hanaoka and company created for 3rd Super Robot Taisen Alpha. As the game was actually intended to concluded the Alpha trilogy, there are actually a fair number of retrospective tracks. Favourites such as "Ace Attacker", "Trombe!", and "Time Diver" receive exciting rock-based arrangements here that bring out all the flair of the original melodies. There are also intense orchestrations of "Omnipotent Mediator", "Abominable Visitor", and "100 Travelling at Night" that make an enormous impact in context and benefit from various synth enhancements. There are also curious orchestrations of "Skill" and "Gong" at select points in the soundtrack that present the melodies in a refreshing new context. The latter, used during the final battle, will be especially delightful for fans of JAM Project.

Despite the huge amount of commemorations featured on this soundtrack, there is plenty of completely original material too. After all, there are 70 pieces of music on the last two discs alone. Salamander Factory continue to impress with vast and detailed orchestrations like the heroic "Union is Strength", "Risk of My Life" and "My Righteousness". Though somewhat lighter than earlier Alpha soundtracks, there are also jaw-droppingly dark additions too, such as the modernist-inspired "Gospel of the Imperial Soul", electro-tinged "Existence Becomes Nought for a Spirit", and, with its Front Mission 3 vibes, "Gate to Target Shots". A special mention is also deserved for "The Soul of Alpha", an impressively produced and truly entertaining fusion theme from Koji Hayama that capture most positive feelings associated with the Super Robot Taisen.

Clearly, 3rd Super Robot Taisen Alpha is the musical culmination of the Alpha subseries in terms of both quantity and quality. Furthermore, the presentation fo this soundtrack across four discs is much more exuberant than the troublesome soundtrack releases of earlier instalments. The soundtracks for MX, Z, and Original Generations are probably more impressive than this one in terms of intricacy and diversity. However, this album captures the spirit of Super Robot Taisen the best while still pushing various musical and technical boundaries and offering numerous surprises. Highly recommended. 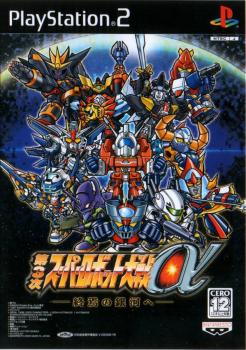