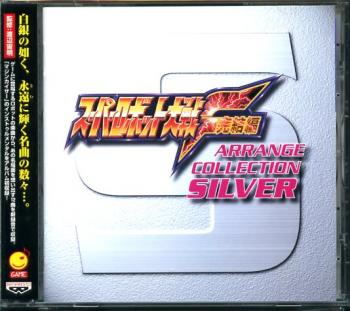 Released as a tie-in for a re-remake, Super Robot Taisen F Final Arrange Collection Silver is a compilation of instrumental arrangements. It is dedicated almost exclusively to the mecha anime theme songs featured in the game, so is bound to have most appeal to anime fans. The instrumental arrangements here are more elaborate than those featured in the game, but still generally pale to their originals. The title of the album thus seems quite fitting — what's offered here certainly isn't 'Gold'.

In terms of selections, this album is quite impressive. There are famous melodies featured from various famous mecha animes, ranging from Great Mazinger to Mobile Suit Z Gundam to Neon Genesis Evangelion, few of which have been arranged together before. Many of the tracks have become staples of the Super Robot Taisen series with their anthemic qualities, for example "Burning Love", "Flying in the Sky", and "Getter Robo!", thanks to the strengths of the original melodies. While some listeners of the series' music will have grown bored of these tracks, their treatment here is far more ambitious than the usual Super Robot Taisen original score. Unfortunately, though, the final results are uninspiring in the vast majority of cases...

Most significantly, many of the tracks on the album treat their melodies in an inappropriate way. "Fly, Dunbine" and "Flying in the Sky", for instance, make two major mistakes. One, they expose the melody too much with the heavy trouble focus and minimal accompaniment, leaving the arrangements sounding a bit hollow and superficial. What's more, the melodies themselves are presented on rock organ, giving a strange dated sound; this conflicts with the more modern stylings elsewhere and isn't even justified by the age of the animes featured. In part, these tracks reflect the problem of making instrumental arrangements of tracks that were original vocal themes. And perhaps for this reason, they will always be inferior according to anime fans...

The album does offer quite a bit of diversity, but it's not always welcome given the nature of the originals. The L-Gaim track aspires to a smooth jazz sound with its passionate blues harp performance and slushy tenor saxophone solos. "Burning Rave", on the other hand, goes for a hard rock feel with its apocalyptic opening riffs, while "Cruel Angel's Thesis" combines a range of rock, jazz, and orchestral elements into a supposedly encompassing finale. Sadly, in every case, the results sound contrived. The melodies sound completely out-of-place and lifeless on the instruments chosen. Furthermore, the arrangements themselves tend to be quite shallow and conflicted, despite clearly aspiring to something greater.

Thankfully, there are a couple of redeeming tracks on the album. Whereas most renditions of the Mazinger Z theme have an upbeat trashy jazz feel, Hitomi Kobori'sopening interpretation here goes quite a bit beyond. The spacey ambient opening declares something epic is about to unfold and the body of the arrangement doesn't disappoint with its intense progressive funk stylings and awe-inspiring choral interludes. The melody is still preserved on a succession of jazz instruments, but isn't the main focus like elsewhere. Instead it's part of a much great cinematic journey. Finally, the character theme arrangement "Scirocco! Gale! Cybuster" is considerably less contrived than other entries, opening with a gothic solo before moving into a delightful rock segment. The melody this time integrates smoothly with the rest of the arrangement and is thankfully presented on electric guitar, rather than harmonica or rock organ.

It's quite a novelty to have so many theme songs from mecha animes arranged in one single album. While most tracks are more ambitious than their Super Robot Taisen renditions, they generally fall down against their anime originals. This is largely because the melodies do not sound as good when translated from vocals to instrumentals, especially given the often clumsy and dated arrangement approaches here. With two exceptions, the results are generally cringe-worthy.