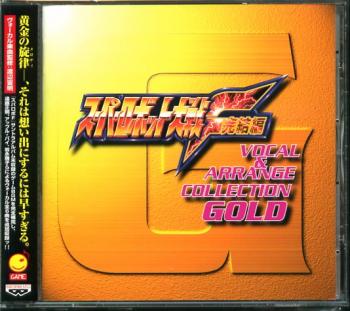 Released as a tie-in for a re-remake, Super Robot Taisen F Final Vocal & Arrange Collection Gold features two sections. The first six tracks are vocal arrangements of favourites from the Super Robot Taisen series and its featured mecha animes. The subsequent 10 tracks are instrumental renditions of the new compositions created for the 'Final' remake of Super Robot Taisen F. Do consumers get the 'Gold' they desire here?

The main focus on the album are the six vocal arrangements, which adhere closely to anime standards. Female vocalist Masako Iwanaga gives it her all on the rock anthem "Time to Come". While not to my personal tastes, it's a very motivating and surprising rendition of a Super Robot Taisen classic. Other arrangements preserve the typical anime sound, but using other vocalists, namely the typical charismatic male lead on "The Winner" and the hyperactive screechy girl on "Top o Nerae! ~Fly High~". These anime originals certainly sound best when they are presented as intended — on vocals.

Perhaps the last two vocal tracks are the most emotional efforts. "Just Communication" creates quite a climactic feel with its spirited vocals, thick synthpads, and wild arpeggiations. The melody here is certainly among the most memorable on the soundtrack. "To the Cosmos With You" appropriately closes the vocal section on a serene note with a rendition of a Space Runaway Ideon favourite. Returning vocalist Iwanaga adapts her voice quite well to the ballad format, while the backing electric piano and strings are tacky but fitting.

The rest of the album is dedicated to instrumental arrangements of background music created for Super Robot Taisen F Final. Although there are some minor synth improvements, the amount of arranging here is minimal. Most tracks still loop, rather than attain a dramatic arch, and those that don't are just short worthless tracks that don't go beyond the one minute mark anyway. In fact, of all the tracks here, there are only five full-length arrangements, four of which is a butchering of Richard Wagner's "Ride of the Valkyrie" and the rest are uninspiring...

Focusing on the other full-length tracks, "Did It Load?" sets the atmosphere of going off to war with its nationalistic string melodies and snare drum rolls. It's a pity that it is so stereotypical and repetitive, since the melody isn't bad. "Mars Berserk" is another clichéd effort, portraying evil deeds with dark orchestral discords against yet more snare rolls, while "Requiem" is a dull and overstated ending theme that is nowhere near as deep as it intends to be. At least "Horizon on the Far Side" redeems this subpar selection slightly with its exciting rock melodies...

Overall, the Super Robot Taisen F Final Vocal & Arrange Collection Gold is considerably better than its predecessor. Though few in number and select tastes, the vocal arrangements do exactly what was expected and are potentially emotional. The instrumental tracks are very stereotypical and often brief, but at least made it on to an album release. However, there is not enough content on the album for it to be worthwhile to anyone other than hardcore collectors.