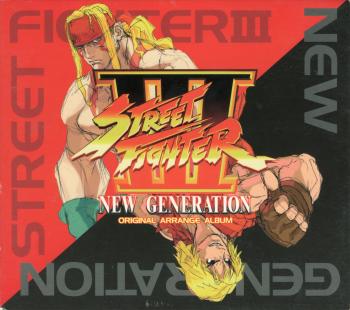 I love arranged soundtracks. In this day and age, in-game music and the hardware it comes from has advanced sufficiently to produce superb quality sounds, but there are still always constraints. Time limits, file size limits, the requirements of the flow of the game, etc. This is true especially in fighting games, where the fight lengths vary wildly and so the tunes have to be written to be repeatable, and at the same time have enough initial impact to make an impression before the round is over. Arranged soundtracks are free of all that, they allow the composer to really cut loose, as it were, and retool the familiar tunes they way they want to, free of the shackles of game design and hardware constraints. I found this CD in Tower Records a couple of years back, at a time when I'd only played Street Fighter III: New Generation a few times. I loved it all the same. It's hard not to, as it's a short but incredibly sweet alternate take on the Street Fighter III themes and characters.

The collection kicks off with "Jazzy NYC (Latin Mix)," a rich, satisfying, and finely made retuning of Alex's classic theme. It was always a great piece and is made even better by the improved instrumentation, more complex structure, and a spicy meatball seasoning. From New York City to Olde Londone Towne, the second track is Dudley's "Leave Alone (Rare)". The original was one of the few tracks that made an impression on me while playing the arcade with its slightly mournful motif and simple but stirring backbeat. Moving on past Yun & Yang's "Crowded Street (Midnight Ver)" (blah) we come to the first real treasure of the bunch.

"Sharp Eyes (For Dancers)," by a process of elimination, is Ibuki's theme, though it's nothing at all like her in-game theme. It is, however, utterly superb. A languid, thoroughly cool, calm, and collected piece, it's easily one of my favourites, despite it's relative lack of development throughout... The fifth track is Ryu's theme, "Good Fighter (Blirian Mix)". It's relatively unchanged and uninteresting. "Tomboy (Huge Side)" used to represent Elena is again nothing like her game music, which I remember as being pretty weak anyway, so it's no great loss. Some tribal-style drums get things off to a good start and eases it into a light pleasant tune before becoming more agitated. A saxophone interlude eventually leads it into a rap section. Not bad, but not one of my favourites.

And that's because my favourite track from the whole CD is "Get On A Train (Backing Repeat)". It's a brilliant rendition of Necro's NG and 2i theme, keeping all the goodness of those versions and really building and building on top of them to create something with a kind of manic, almost jubilant fury. The pulsing, cracking saxophone counterpoints the slow, determined, and mindlessly cyclical piano foundations of the piece. Some weird sound effects and the odd sample elevate it about being a standard 'jazz' effort and the whole thing really comes off as something slightly offbeat, but insanely and almost aggressively listenable.

"Caveman (Odd Note)" is equally superb and undoubtedly the surreal highlight of the compilation. Totally ignoring Oro's game theme, this tune is disjointed, silly, amusing, and confounding. This piece has everything from the slow hypnotic opening to the little jabs and pokes of instrumentation, the garbled speech samples, the quizzical probing main theme, and the out-of-nowhere bursts of orchestra that remind me of a secret monkey band momentarily escaping their prison. It's incredibly bizarre yet at the same time really catchy and inspiring.

The next track is "The Judgement Day", Gill's theme. It starts off wonderfully; really atmospheric and eerie, it's the best thing in the world for about 20 seconds. Afterwards, the the bass starts thumping and some guy starts saying things like "I drop these lyrics for my people in the ghetto!" and all the summer night mysticism and hidden eldritch machinations just die instantly. It's pretty good, and invokes a great "dead cities" feel; it's just it completely fails to live up to its introduction. The final track is another rendition of Alex's "Jazzy NYC", this time subtitled 'light edit'. It's closer in tone to the New Generation original, and is a pleasant if slightly unspectacular way to end the CD.

All in all, the Street Fighter III New Generation Original Arrange Album is a fabulous selection of music, tied enough to the game to make it a worthwhile fan purchase yet still different enough not to just be retreading old ground. The tracks are varied and well-made. Theyperfectly encompass the dark, urban end-of-millennium feel of the Street Fighter III games.