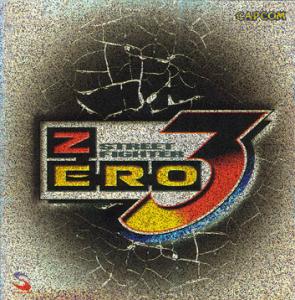 I've always had sort of a love/hate relationship with the Street Fighter Zero 3 Game Soundtrack. I spent a lot of time playing Street Fighter Zero 3 (as Street Fighter Zero 3 is known as, outside of Japan) and I can definitely say the music can get to be downright catchy, for hours at a time. Being a primarily techno-driven soundtrack, the often-mindless beats and grinding synths can be just the thing to put you in the right mind-set to block out all things going on in the real world and land that ultra-difficult 55-hit custom combo that'll win you the match and the awe of those standing around you. Unfortunately, when isolated and listened to on its own, the soundtrack can come off as repetitive, lifeless, and downright annoying. True, it's not unique for a soundtrack to work better in context than alone, but few times have I encountered one that can be such a chore to listen to out-of-context as the Street Fighter Zero 3 soundtrack.

In a lot of ways, this soundtrack was a turning point for Capcom's general composing style. Early soundtracks, notably the ones for Mega Man series, Capcom's NES Disney games, and Capcom's later fighting game soundtracks (Street Fighter II, Darkstalkers 1 & 2, Street Fighter Alpha 1 & 2, the Marvel VS series, Pocket Fighter, Rockman Power Battle, Rockman Power Fighters) all revealed a somewhat light-hearted, yet distinct melodic synth-rock that had become synonymous with the composers that worked for the company. Street Fighter Zero 3's soundtrack was one of the first major soundtracks to break this mold, opting for a much more contemporary dance/techno style that concentrates more on having the music "blend in" with both the game and the mainstream music commonly found in the outside world than continuing to be unique. Fighting soundtracks that would follow this pattern would be Street Fighter III: 3rd Strike, Marvel VS Capcom 2, and the ear-grating Capcom VS SNK series.

The main problem I have with this style is that it can leave somewhat of a "cold" feeling on the listener, as the music does nothing to explain what the situation in the game is. Example: In Street Fighter Zero 3, Rose, Ryu, and Guy are three completely different characters, yet if I were given their Alpha 3 character themes, I would simply not be able to tell who has what theme. This was never a problem with their Alpha 2 themes — Guy had a remix from Final Fight, Ryu had a calm version of his familiar Street Fighter II theme and Rose had a soft-building Italian piece that carried a bit of a "mystic" feeling to it. The thing that bugs me somewhat about this is that there is a lot of music on here, incorporating five different composers (most of which were known for the "old" style of composing) and three sound designers, which tells me that the move to this style was not an accident. Oh well, at least this one even bothered with character themes, unlike the Capcom vs SNK series, which was just a crappy handful of generic stage themes?I guess that earns this one a few brownie points.

In contrast to my disliking of this album's style, there are a few standout tracks. "Decisive Bout" is a suitable replacement for Charlie's old theme, using a steady series of drumbeats and a loud, held electric bass along with a somewhat repetitive melody to give the listener something to both hum and nod along to. "Active Red" is a nice flashy theme for Ken, showing off some cool electronic effects and funky rhythms. Not better than his superb theme from Alpha 2 by a long shot (which originated in the original Street Fighter II), but one of the handful of themes where I was able to guess which character it was for. On the other hand, "Performance" was a fine theme for Dan, even moreso than his Alpha 2 theme. Being mostly a gag character, the wacky beats and off-kilter melody suit him perfectly, much more than his somewhat serious Alpha 2 theme.

"Stripes" is one of the few themes that takes the usual techno-grinding found on the rest of the album and turns it into a decent melody-driven piece, without being too repetitive. This one just begs to be performed/arranged with live guitars. "Mach Smasher" sounds almost of place on this album, with a strong, distinct Japanese feel to it (it's E. Honda's theme) and a melody that sounds like "The Midnight Express" note-for-note. The grinding finds its way to the background and actually enhances the main melody, making this easily one of the strongest pieces on the whole album. "Prismatic Stars" works as a nice theme for new character R. Mika, with its perky synths and drum loops. Blanka's "Wild Nature" manages to be completely hummable, despite consisting of a series of broken melodic passages with clapping in the background. Very unique. "Seek no Escape" loses some of its momentum without the over-enthusiastic announcer's "FINAAAL ROOOOUND!", but its raw energy is more than enough to carry it as a theme for a decisive show-down. Same thing for "Brave or Grave", which is used for the decisive showdown with Super Vega (M. Bison for non-Japanese Street Fighter fans).

Unfortunately, anything I didn't mention falls into one of two categories: "barely passable" or "mindless filler". The "barely passable" ones can be enjoyable on the first listen, but get old extremely fast, even while playing the game. For example, Sakura's new theme "Breeze" has a decent enough cute beginning, but then it repeats itself over and over and over and over and over and over before it finally changes into something that sounds like the composer took about five minutes to cobble together. Not cool at all, especially when her Alpha 2 theme was one of my favorites from that soundtrack. This is just utterly annoying. "Crimson" ditches the Spanish feel for Balrog (Vega outside of Japan) and gives him an annoyingly repetitive melody that features a stupid "newsflash" beep.

"The Road" was one of the first pieces on here to truly annoy me. It's Ryu's theme, yet it does nothing to even hint towards the patient laid-back style of Ryu's character or even his old theme. Not exactly horrible, but a fine example of this soundtrack's attempts at "genericness". This theme must have sat on their "generic character theme" shelf for quite a while before they decided to use it here. On the other hand, "Resolution" carries the same Chinese feel of Chun-Li's previous theme, but has no energy whatsoever behind it. It honestly feels like random notes in between the Chinese jingles. Dhalsim's theme "Praying" has the same problem, only it's with the Indian feel of his previous theme. Others like "Simple Rating", "Proof of Divinity" and "Shining One" are simply okay to listen to while playing, but are too repetitive and unremarkable on their own to even call them "good" pieces of music.

Finally, we have the "mindless filler" tracks. I'll keep this paragraph extremely short: "Behind You", "No More Swingin'", "Gimmick", "KAKUGO", "Scala", "Untamable Fists", "Moments", and "Black Power" are some of the lamest, most aimless and most uninspired combinations of drumbeats and techno-grinding I have heard from any soundtrack. They literally sound like their respective composers had about five minutes to do each one, with a gun to their head during that time. They almost feel like Beta versions of whole tracks, as they feel like they're incomplete. Oddly enough, most of these were done by Yuki Iwai, an otherwise fine composer who worked on the masterful X-Men VS Street Fighter and Marvel VS Street Fighter soundtracks, which further hedges my bets that these themes were basically slapped together because of time issues (though her other work on this soundtrack mostly belongs in the "barely listenable" pile as well).

So that's really it? A handful of tracks I really like, a handful of tracks you almost can't pay me to listen to (almost!), and a bunch of others I can tolerate in-game, but rarely survive their respective track times on the soundtrack itself before I hit the "skip" button. Despite the work of five different composers, the cold techno instrumentation and generally unremarkable compositions make something that succeeds in blending in with all of the generic techno and dance music at your local music store, but also fails overall because so few of these tracks represent their characters with any kind of class, in that they are rarely distinct from each other. The rich diversity and melodic goodness of fighting games like Street Fighter Alpha 2, the first three Marvel VS games, Darkstalkers, and the original Street Fighter II are what made Capcom's music stand out to me, even before I knew game music CD's existed. This was the first soundtrack to really betray my trust in Capcom's music department and it's sad to see that it was merely a hint of things to come, as the highlight of their fighting game soundtracks is still Marvel VS Capcom Original Soundtrack and it's over six years old! Bottom line: Buy it if you played the game and want the music. Otherwise, stay the hell away. Game Music Online still stocks this at a hefty $36.