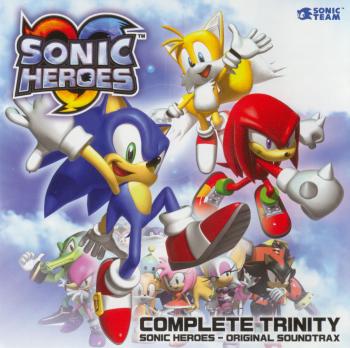 Sonic Heroes is the first multiplatform Sonic game to be released during the sixth generation of the video game consoles, after the unfortunate demise of the Dreamcast. In a way, Sonic Heroes tried very hard to display a lot of homages, symbolism, and representation of the classic Sonic games. Not just the basic stuff like the green checkered hills, but also how drastically the music could evolve when you travel from the first stage all the way to the last. Not to mention just how variant are the explored genres, in the same manner as Sonic Adventure 2; only this time, the creation of the music visualizes more to fit the stages rather than the characters themselves. As always, Jun Senoue is at the seat of the music direction, and accompanying him are a team of guest contributors, including Naofumi Hayata, Yutaka Minobe, and Keiichi Sugiyama, classic veterans of the Sonic the Hedgehog soundtracks.

In terms of stage progression, Sonic Heroes' format was to play it through in acts, like the original Sonic games, specifically Sonic the Hedgehog 2. There are 14 stages, all grouped into two, and within these two groups is a basic layout of a stage which looks similar within both acts. Not surprisingly, the music, although performed differently among both acts, maintains the same style and genre, and even maintained the same instruments, in order to better display that classic feeling of traveling through these acts as though it was one long stage altogether.

There are quite a few genres explored on this album. The album starts off tranquil and peaceful from the beginning, and as one travels down to the last few tracks on the second disc, it becomes dark and menacing, yet still rather enjoyable to listen to. For a Sonic game these days, it's almost mandatory to start off with a beach stage, and that's where it all begins, with peaceful surfer-inspired rock and fast-paced drums in the form of "Seaside Hill" and "Ocean Palace". Both tracks use a very unique fashion of guitar duels, and to keep in tune with that beach feeling, there's no rhythm guitar to be heard at all. It all fits together very nicely, inspiring the listener to sit down and watch the beach flow by.

Around the album, we also get to hear industrial techno, in order to represent a futuristic kind of world outside our creativity. Use of a strange synthesizer mixed with fast paced drums characterises "Grand Metropolis" and "Power Plant". In a more calming style of techno, we also have these rather strange uses of pinball-esque sound effects played out through a synthesizer, and athe more casually performed percussion for "Casino Park". "Bingo Highway" takes what "Casino Park" carries, makes it much more fast paced, and adds the hardcore rhythm guitar to make it much more frantic. The samples and sound effects that wrap up these tracks give them that Las Vegas gambling fever and a childish manner. It's classic Sonic the Hedgehog style.

For fans who loved the hard rock performances that came out of both Sonic Adventure titles, these kind of performances comes into full throttle once again between "Rail Canyon" and "Bullet Station". The lead guitar plays out a very intricate and elaborate riff, and the skills of the drummer have never been more intriguing, as the artist just pummels away an echoing percussion with an equally echoing chimes of the cymbals. "Bullet Station" goes one step beyond by having the guitars be covered in a techno fashion, as well as the drums in a more ground-pounding manner, almost similar to a song that can be heard on the vocal soundtrack for Sonic Heroes, "This Machine" by Julien-K.

Around the middle of the album, we get to hear "Frog Forest". It's a very nice acoustic guitar performance, mixed with a nice feeling of soft percussion and environmental sounds, giving it that rain forest feeling while still mixing it up with the velocity of the high speed hedgehog. Progressing past this track is "Lost Jungle", a very heavy drum and bass track, similar to the sounds heard in African chants and other related world music. The only thing that makes it stand out a little different is the use of the piano and synthesizer. It's very unique and once again gives off a hint of Sonic nostalgia.

And now leaving the worldly music, we step into "Hang Castle", a very slow paced, ghoulish techno track. The percussion is played out softly, with the sounds of the ghosts yelling out random shrieks in a harmonizing way. At various points, the drums will almost be played out in static in order for a flute to take the lead, then at different moments, it will switch places with the drums taking the lead with the help of a very mellow violin. It's a pretty mesmerizing theme and not one that's trying to scare you, but rather make you imagine such a scenario to keep you calm.

"Mystic Mansion" continues where "Hang Castle" left off, but whereas that theme had two different sections of exploration, "Mystic Mansion" goes through an even wider selection of styles while still maintaining the melody of trance. At different points, a lead guitar will play a hardcore moment, then the chiming of the church bells will bellow out, and at other moments, a whistling synthesizer will fill in the eerie gap. Again, it's not the kind of track created to try and scare, but one to keep you locked in a deep sleep desperately making you want to dance.

During the final moments of the soundtrack, the drum performance is kicked up a notch to a more outstanding measure of fillers and fast paced solos in a punk-ish matter. "Egg Fleet" fits that style perfectly, along with the guitars playing fast enough to keep up with the drums. As the theme clears, we enter into a more industrial kind of world. "Final Fortress" plays out an incredibly demonic wavy sound of synthesizer, and the guitar is played out slowly to emphasize power and destruction. It all comes down to the final battle between Eggman, with "Egg Emperor" having one of the most awesome drum intros I've ever heard.

When everything is over and the adventure is done, the final theme "Finale... Adventure Must Goes On" ends the album on a perfect note. It's a very joyful piano performance accompanied by violins. Rarely do we get to hear such a wonderful arrangement, especially one for Sonic and one to end a soundtrack with such positive charm. It all comes to a satisfying finish, as we begin to reminiscent what Complete Trinity gave us.

Complete Trinity: Sonic Heroes Original Soundtrax definitely shows the creativity and exploration of Jun Senoue and his group of talented musicians. As I've said before, this game tried to do its best reminiscing about some of the more older games and, through the music that can be heard on Complete Trinity, this really shows. While not as expansive as some of the later soundtracks, like Sonic '06, the tracks on this soundtracks are a well balanced mixed of music that both the old and new Sonic fans can easily relate to. A combination of Techno, Rock, Trance, Acoustic, and much more, fans are given a soundtrack that's easily memorable within the entire Sonic franchise. A highly recommended album for all types of Sonic fans.