True Colors: The Best of Sonic the Hedgehog Part 2 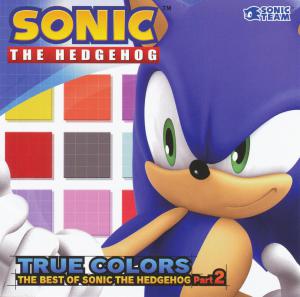 The title of this album says it all. True Colors: The Best of Sonic the Hedgehog Part 2. In case you're not aware, it's the sequel to Sonic's previous vocal compilation album, True Blue. The first part dealt with theme songs that were more related to Sonic himself. For this album, his buddies get to share the spotlight. From Sonic Adventure to Sonic Riders, the songs that were chosen for this album mainly involve the theme songs for other characters and not just Sonic himself. And just like the first one, this CD also gets loaded with bonus songs you won't hear it elsewhere. So, for a sequel, does it stand out against True Blue? And for a compilation, were the songs chosen well enough? Let's take a look at this CD's true colors.

After hearing this album in one sitting, I actually realized this is the first time I ever actually got to concentrate on songs that I would normally skip in favor of the songs more in tune with Sonic himself. And with that said, I realize why that is. While I do love most of the songs to come out of the Sonic franchise, there are a few I wouldn't be able to tolerate no matter how long I listen to these tracks. They're just not that great to me. Some songs just feel like they were randomly thrown in, like Rouge's "Fly in the Freedom" and Amy's "My Sweet Passion". Really now? These songs? Don't get me wrong — they are pretty nice tracks. "Fly in the Freedom" has that nice jazzy lounge style going for it, and "My Sweet Passion", well... it's just ideal for Amy. But for a guy like me who loves some Hard Rock, it's just hard to take these songs in, even with the excuse that it's a guilty pleasure.

Of course, there are some nice gems here. Hard Rock I say? OK then, I got Julien-K's "This Machine" and "Waking Up". These were my instant favorites the first time I heard it back in Shadow the Hedgehog and Sonic Heroes, and it still stays true here. "E.G.G.M.A.N." is pretty rockin' too, but the vocals are at a point where it either makes it or break it for a random listener. And "Un-gravitify" was a nice choice too. Not as hardcore, but still an awesome techno track to get you pumping, in case you didn't care enough to get the whole Sonic Riders: Zero Gravity soundtrack. OK, so they got that cheesiness that only a Sonic fan in the blue moon would enjoy. That cheesiness goes overboard however with the inclusion of "Unknown from M.E. (SA2 Version)" and "Believe in Myself (SA2 Version)". I'm realizing much further down the line just how unbearable some of these lyrics are, and how its performed. It's no wonder I would skip it without a second thought.

Talking about gems again, we do get some nice melodic techno tunes, such as E102γ's theme. No question about it; it's a very relaxing, peaceful song that makes you think, to wonder, and to believe. It's an overlooked song that I'm glad gets a noticing on this album. Then there's the surprising inclusion of "Cosmic Eternity - Believe in Yourself", which is the ending theme song to the Japanese version of Sonic CD. Probably to coincide with the intro of the Japanese version Sonic CD on the True Blue album, this one is a fan favorite for those lucky enough to hear the Japanese soundtrack; its nice soft piano intro segues into a techno beat track with a hint of some whimsical rapping. Pretty nice choice overall.

OK, so I got the compilations out of the way. Lets get on to what we really want to hear — the bonus tracks. First up, it's "Look-A-Like (Short Edited Ver.)". If you are unaware about the origin of this song, its actually the theme song for the Sonic the Hedgehog Original Video Animation. Just like how that anime closely resembled the art style of Sonic CD, this song takes a small cue to the trance and dance beat rhythm that was found on the Japanese soundtrack of Sonic CD. It's pretty good, especially with the way the lead guitar plays out a few small licks through the beginning, along with the soft female vocals connecting the whole song, but overall, it's a relatively simple and short track, as the title implies. Why they went with the short version when they could have gone with the long one is beyond me, as it doesn't sound like it would have been any difficult at all.

Up next is "Sonic 3 MegaD Mix". This is actually a remix that was found in the gallery for the game Sonic Gems Collection. I'm so glad they went with this one, since it was my most favorite remix from that gallery. It's the stage / character select screen theme you hear in Sonic the Hedgehog 3. The original version had a latin feel to it, so for the remix, some latin related instruments were added to further continue that emphasis. The drums, the fanfare, the new additional bass, along with the clever use of the classic Sonic sound effects, were all added in to sweeten the Latin mix. It's all perfectly executed while leaving the sounds of the original 16-bit version intact. A perfect choice for a bonus, though I really can't help but see the missed opportunity of seeing the rest of remixes from Sonic Gem Collections appearing on this disc as well.

Next on the list is "Lazy Days - Livin' in Paradise" (Original Demo - Mixed with Ted Poley)". Like the title says, this is the original version of Big the Cat's theme song from Sonic Adventure. The major difference between this and the final version is that the original had much more of the rhythm guitar in play. In fact, there's more emphasis on the guitar here then there was on the final version, which added some key instruments such as the piano. Not to mention, this demo version sounds less whimsical and wacky then the final release, since it's lacking the piano and the cartoon sound effects. Ted Poley's vocal performance is pretty much the exact same thing. A nice song in the end and, because its not as crazy or as cartoony as the final take, I actually prefer this version much more.

Now we have "All Hail Shadow (Hybrid Mix feat. Mike Szuter)". Hybrid mix, my foot. This song is just Crush 40's version of "All Hail Shadow" with Mike (who previously performed the original version of the song) singing it. I doubt that he even came in to sing it. It sounds like they just took the original version apart, and spliced it into the new version. This wouldn't sound like a bad idea, but even after hearing it countless times, it just feels and sounds pointless. Nothing special was added in to help make the Hybrid mix title feel special. The song itself isn't bad at all, but if I want to hear Crush 40's version, I'll hear Crush 40's, and vice versa with Magna-Fi. Not a worthy song to be called a bonus.

And now, another Bentley Jones remix, "Dreams of an Absolution (Starry Night Mix)". The remix title pretty much says it all. It's got this dance beat lullaby style going for it, with an interesting synthesizer that sounds like a piano, but not quite, along with a very repetitive and almost clichéd bass you most likely hear from those techno rave parties. To follow along with the Starry Night title, twinkling effects are heard every once in a while. I love the song, but it feels too simple, like as though Bentley went with the basic and only basic format of remixing a song, especially compared to Jun Senoue's past take of this song, which will still remain untouched as the best remix of Dreams of an Absolution I've ever heard. It's not bad a song. It just doesn't have enough of that "oomph" needed to make it stand out.

And finally, to close the entire CD, we have "Open Your Heart (K-Klub Remix)". I don't how to describe this song. Just like "Dreams of an Absolution (Starry Night Mix)", this song is, at its best, a simple techno dance beat as well. It's more hardcore, and it does have these leads that make it stand out very well, but it still sounds too simple, as though the remixing process took the basic bread and butter of what makes these kinds of dance music popular. In fact, what is taken out of the original song is mostly Johnny's singing, connected with the most common sounds of the dance vibe, and that's pretty much it. I do give kudos to the way the guitar solo of the original song was implemented into this, and it would have been great if other parts of the song got in on it. In the end, the whole song just sounds too basic for me. Nothing outstanding for me to listen to over and over.

I really hate seeing myself dislike this CD, but truth be told, it's just not as great as the first one. Most of the songs were poorly chosen, and not enough of the bonus tracks made me want to continue listening to this album more than once. Ironically enough, the saving grace of the bonus songs are those that I've already heard, but never were released on a CD. That "Sonic 3 MegaD Mix" is a perfect example and makes me wonder why Sonic Gems Collection never got a soundtrack. Perhaps the original demo take of Big the Cat's theme was a welcome choice as well, so my points go there. Even so, this compilation wasn't enough to make me hear this CD more than the album in which the original songs were taken from. At least in True Blue, we were rewarded with Crush 40 remasterings on top of the bonus tracks. I understand True Colors is meant to be about the character themes other than Sonic, but there could have been so much more to this. Not enough attention was give in making the CD.