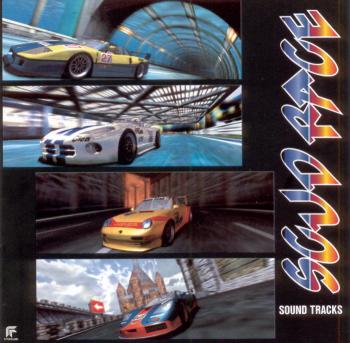 What on earth is Scud Race? And why the ugly name? Well, Scud Race is the Japanese title for a relatively well-known Sega racing game Sega Super GT. The title was one of the first to use the Sega Model 3 Arcade hardware, so was more technologically commanded both graphically and aurally compared to predecessors like Daytona USA and Sega Rally Championship. As a result, the various composers were able to use sample libraries more exuberantly and experiment more with vocal music. The results were displayed in this original score. The verdict? Promising but not good enough.

The album gets off to a somewhat worrying start with "Groovin' Delight". At its core, the theme is a simple but enjoyable blend of funky electric guitar work and electronic frills. However, the music is afflicted with a problem common to a lot of game tracks produced in the early sampling era — use of ridiculous voices. While no voice samples take the melody, two annoying samples repeat throughout in the background and are particularly distractive and annoying. Unfortunately, composer Kaoru Ohori doesn't stop there and brings similar samples to "Breeze of the Middle Ages" too. Fortunately, they're hardly as persistent giving a chance for the electric guitar work to show through, culminating in an inspiring solo from the 1:50 mark. "Merry Maze" features its novelties too in the form of silly sound effects, but they're actually cute and enjoyable. The whole theme is a much-needed hyperactive blast.

Hideaki Miyamoto's contributions are a little more successful in offering a modern sound. Rather than rely on silly voice samples, "Flight in the Dark" actually features a streamed performance by a female vocalist. Her performance is actually quite rousing so long as one doesn't focus in on it too much and listen to the Engrish pronunciation. The backing is actually pretty simple and poppy, but does the job. "Ancient Voice" is a slightly unusual track since it blends quite a few apparently unrelated elements together, including a funk guitar melody, passionate vocal parts, and percussive interludes. It doesn't come together coherently, but is interesting enough. The rest of the original score isn't much of a highlight. There are short funky jingles such as "Goal" and "Stage Select" as well as the short reflective tracks "Name Entry" and "Ending". While effective enough, none are worth revisiting otherwise.

The four bonus tracks are, at best, a superficial novelty. They're basically recordings of the Arcade sound during the game using different cars. As a result, music is very much in the background during these tracks, while engine sound effects and the announcer are much more prominent. Some might find it nostalgic to listen to, but most won't see the point.

The verdict? Scud Race is a decent but flawed score. It aspires to be a vocal score, but doesn't manage it like the subsequent Daytona USA Circuit Edition did due to its focus on random voice samples, one track aside. What's left sounds mainly like a random collection of funk, rock, and other riffs with the occasional solid melody or inspired solo to break things up. It's less focused than earlier efforts like Sega Rally Championship, perhaps because of the overreliance on samplers rather than core ideas. The album is very short too and the bonus tracks aren't worthwhile. All in all, a promising attempt, but most will be better off skipping this.

Vocals: Hiroko Hamano (4, 12)
Lyrics: Kan Hashimoto (4, 12)
Album was composed by Fumio Ito / Hideaki Miyamoto / Каору Охори and was released on February 19, 1997. Soundtrack consists of 14 tracks tracks with duration over about 35 minutes. Album was released by Futureland.