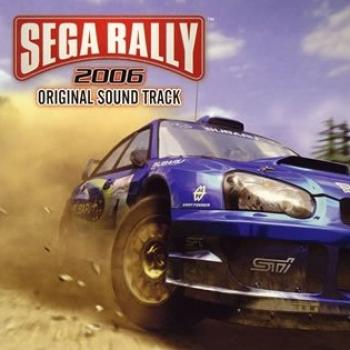 The Sega Rally 2006 Original Soundtrack features many of Sega's composers collaborating together to create a unique and diverse sound for this racing game. While it is mainly composed by Takenobu Mitsuyoshi, it also features a lot of contributions from other famous Sega composers, like Hiroshi Kawaguchi, Hideki Naganuma, and Jun Senoue. How does it compare to earlier instalments of the series? You'll just have to read on to find out.

I'll start the review by mentioning the pieces I find entertaining from the various contributors aside from Takenobu Mitsuyoshi. The first, Hideki Naganuma's "Boosted", is an exhilarating theme that focuses on blending electronica with rock. While it doesn't feature the strongest of melodies, it definitely gets you in the mood to race and the softer synth sections really help contrast to the more "in your face" electronica. "La nuit de ma ville," composed by Junko Shiratsu, is a pleasant fusion of jazz and electronica elements. It's a pretty decent composition with lots of developments throughout, but at the same time, it does tend to get a bit boring as it progresses. However, the brass and string works in it give it a mysterious, almost Cowboy Bebop-esque sound, in the end.

"Irritation," by Mitsuharu Fukuyama, may just be that for some. I find this to be one of the weaker themes on the soundtrack. It features some jazzy influences that go well with the chaotic electronica heard in the beginning. The string and piano interlude, should you be able to make it that far, are something far more tolerable than most of the track. This one is definitely a hit or miss theme, but it does add to the uniqueness of the album. One of the Western composers, Richard Jacques, contributes a pretty nifty techno theme entitled "Hand-Breaks". It features a great beat, with some industrial influences, and some interesting synth sound effects throughout. While it doesn't really rely on melody a lot, it still manages to impress with its multitude of synth styles. I find myself listening to this one a lot, especially when driving.

Naofumi Hataya, who just recently contributed a theme to Let's Tap, contributes "Remember R-001". This theme definitely has a jazz sound to it, combined with a nice dance beat. I find this to be one of the stronger themes on the album. The mixture of synth and brass go well together and it features a pretty strong melody and a variety of instrumentation. Another contributor, Kentaro Kobayashi, lends "Blue Horizon" to the soundtrack. This one is a spacey electronica theme that I also consider to be one of the stronger themes on the album. It has a pretty great melody and it's pretty exhilarating. The beat has a very club like sound to it and it varies throughout the track, which I think lends a nice support for the melody.

While Hiro contributes more than one theme, "Verges on the Edge" represents him best. It's a nice mixture of rock and electronica that varies as it progresses. It's not the strongest theme on the soundtrack by far, but I also found Hiro's contributions to be some of the weaker ones, as they are more repetitive than a lot of the other themes on the album. Jun Senoue also contributes more than one theme to the soundtrack, but again, I chose "Beat of My Heart" to represent him. While his style is definitely a mixture of rock and electronica, I found this theme to be the most representative of his style on the album. The theme itself almost has an espionage-like soundscape to it at times, and the electric guitar manages to portray this quite nicely. It also manages to portray the more exhilarating sections as well. Overall, I think Jun Senoue did a great job on this soundtrack and much better than his Sonic contributions.

The remainder of the soundtrack is composed by Takenobu Mitsuyoshi who lends a variety of styles to the soundtrack. "Temptation of Speed" is a jazzy electronica theme with a strong melody and an excellent beat. "Getting Muddi'n Bass," on the other hand, is a more rock influenced electronica theme, with some effective layering and a decent melody. I think it is definitely a more exhilarating track than "Temptation of Speed" and it shows just one of Mitsuyoshi's many styles. Along the lines of rock influenced electronica, "Iron Bullfight" is a mixture of rock and electronica, with a slightly industrial influence to it. The melody is pretty good and sounds spacey at times. "Hyper Conditioned Reflex" is a pretty intense electronica theme as well. It boasts some interesting synth soundscapes and an awesome beat. There are some subtle jazz influences as well, and there even seems to be a slight hint of danger in some of the sections. It's probably one of my favorite Mitsuyoshi themes.

Unfortunately, "Storm of Technique" is one of my least favorite themes on the soundtrack. It's a rock influenced electronica theme, but I find the melody to be some of the least engaging on the soundtrack. In its defense though, it does seem to give a mysterious nature at times, which is nice given the type of soundtrack it is. Fortunately, he makes up for it with "Wild Instinct". This rock influenced theme is definitely more exhilarating and features an excellent soundscape. The wailing electric guitar adds a lot of edge to the electronica beat, especially during the solo. It's probably one of the more catchy themes on the soundtrack as well. Lastly, "Ignition the 2nd Generation" is a nice blend of electronica, rock, and jazz. While the majority of the theme is electronica and jazzy in nature, the sections that have a clear rock influence really help to contrast nicely with the brass sections that usually follow. It's a really catchy theme with a "big band" sort of sound fused with a pretty interesting dance beat. It's definitely one of my favorites on here.

The overall sound for this album is a mixture between rock and electronica. In addition, I think the collaborative effort works well in giving it a more unique sound than a game composed by a single person. In the end, this is a pretty good album, with lots of exhilarating tracks that get your blood pumping. It's also a great album to listen to while your driving, but just be careful. You are on a highway, not a raceway, and I'd hate for you to get a ticket. Pick this up for sure. It's definitely worth it.