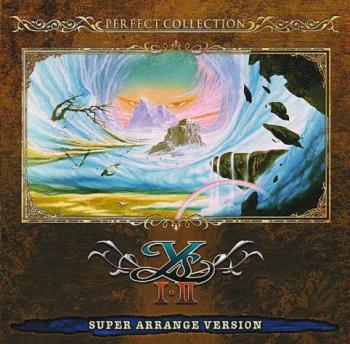 Let's start off with the Super Arrange Version from Perfect Collection Ys. Peculiarly the selection includes three arrangements from Ys II, "Subterranean Canal", "Ruins of Moondoria", and "So Much For Today", though the other six tracks are from Ys. The two vocal tracks are truly select tastes. "Alone Battle" features a light rock interpretation of "Subterranean Canal" by a male vocalist and is quite reminiscent of the style of anime theme songs. "Endless Grow" meanwhile provides a soothing performance of "The Morning Grow" by Shoko Minami, though in my opinion her intonation and tone are undesirable. Elsewhere on the disc, there are authentic jazz interpretations of "Feena" and "Ruins of Moondoria". The former is a smooth jazz performance dominated by cheesy saxophone performances of the over-arranged melody. Fortunately, the latter proves a highlight and is one of the few jazz fusion arrangements that I enjoy in video game music.

There are also three so-called new age arrangements, which are actually classical chamber arrangements by the M-Fujisawa Project. "Baroque Intelligence" is quite beautiful for the way it blends Baroque and Romantic stylings of "Tears of Sylph" on piano and strings. The performance of "Feena" by the same ensemble is also a surprise highlight, partly since the arrangement offers many welcome deviations away from the melody, while "So Much For Today" offers phrasing and form loosely based on Classical sonatas. The album ends with two performances by fan favourites, the J.D.K. Band. "Palace of Destruction" is my favourite rock performance on the entire two disc set, since it offers an energetic full band performance of the classic theme, yet also some more mystical interludes. With its slapped bass and trumpet leads, "Tower of the Shadow of Death" is more of a funk arrangement. It suits the bass-focused original very well and leads the disc out on a strong note.

Taken from Perfect Collection Ys II, the second disc of the album features more elaborate arrangements from both Ys and Ys II in a range of styles. The vocal version of "A Still Time" is considerably more accessible than the vocal tracks in the preceding Perfect Collection. After all, it's more of a soothing choral track than an upbeat pop theme. However, Shoko Minami still returns to offer a balladic interpretation of Ys' "See You Again". While the arrangement and performance are effective, albeit generic, I'm not convinced the arrangement suits the original music. Perhaps among the bigger highlights are Yuzo Hayashi's jazz fusion arrangements of "First Step Towards War" and "Theme of Chester". They have nothing to do with Ys II and the latter — taken from Ys III — is a particularly bizarre choice. Nevertheless, are still very good arrangements with highlight instrumental performnances.

Once again, there are classically-oriented arrangements of series' pieces by the M-Fujisawa Project. "Rest in Peace" best exemplifies the sound of the piano and strings ensemble with passages such as from 2:30 being especially heartbreaking. "Lilia" at last receives a much-deserved full-length arrangement here, blending commanded performances with a touch of tropical influences. Finally, the jazz-tinged interpretation of Ys' "Palace" is sublime and suits the title 'acoustic elegance'. There are also two J.D.K. Band performances. The medley of "Moat of Burnedbless" and "Ruins of Moondoria" is exactly what most would expect from the band with powerful performances of the melody against hard drum and rhythm guitar work. The closer "Too Full With Love", however, is surprisingly another vocal performance dominated by overly sentimental arrangements and poorly intonated vocals. Never mind...

The Perfect Collection Ys I & II: Super Arrange Version is a very diverse album. There is vocal, rock, classical, and jazz music dispersed across these two discs. While most types of arrangement are competent, arguably some of the vocals aside, it'll vary very much from person-to-person what is appealing and few are likely to enjoy everything. It's also important to realize that this album only features a selection of music from the first two Ys games, whereas Perfect Collection Ys I & II: Complete Works of Ryo Yonemitsu features arrangements of everything. Nevertheless, the Super Arrange Versions offer some fresh and creative takes on Ys music, so are still recommended for series' collectors.

-J.D.K. Band Arrange Version-
8) Palace of Destruction
9) Tower of the Shadow of Death