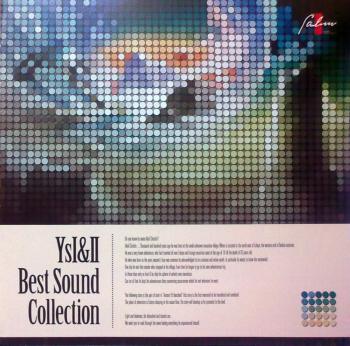 After years of making compilation albums for the Ys series, Falcom finally refine things in the Ys I & II Best Sound Selection. It features some of the best arrangements of the music of Ys I & II ever created, taken from sources ranging from perfect collections to orchestral suites to game and anime scores. Furthermore, it provides a then-exclusive insight into the music of Ys I & II Chronicles and Ys SEVEN. Unlike The Very Best of Ys before it — which features much of the same material — Falcom did not sell this disc. Instead they bundled it with the Japanese release of Ys I & II with the hope of attracting consumers to older albums in the series.

As with The Very Best of Ys before it, the album opens with an orchestral suite taken from Symphonic Ys. The suite features three of the most famous themes from Ys — "Feena", "First Step Towards Wars", and "Palace" — orchestrated by the late great Kentaro Haneda and performed by full orchestra. This eleven minute suite is a bloated introduction to the album, yet it is also a sublime one that reflects the deeper and dramatic elements of Ys. Another expansive suite is featured at the end of the album, dedicated to the sequel's "Lilia", performed by the London Symphony Orchestra. It's an excellent arrangement that helps to bring the album round full circle.

There is a lot of diversity elsewhere in the experience. Listeners can enjoy Ryo Yonemitsu's ecstatic rock take on "See You Again" or Hiroyuki Nanba's harder-edged "Companile of Lane". A beautiful piano adaptation of "Palace" is sandwiched between several rock arrangements and demonstrates the relative beauty of Michio Fujisawa's PrePrimer arrangements. There are also two vocal performances. "The Morning Grow" is perhaps the most beautiful of these, offering Shoko Minami's uplifting vocals and atmospheric rock backing, though "Lilia" is also emotional with its piano-driven ballad approach.

A large proportion of the material is taken from the score to Ys I & II Complete. This game score was never released — instead the mediocre Ys I & II Eternal — and it's a shame as it features quite good arrangements of the series' music. "Holders of Power" and "Tension" not on par with the Ys I & II Chronicles, but still very good. The cinematic arrangement of "Feena" featured in the bonus tracks is also a highlight. Among the other more obscure inclusions are Ys Origin's excellent interpretation of "Tower of the Shadow of Death" and an adaptation of "Lilia" from the series' anime adaptation.

There are three arrangements from Yukihiro Jindo's exceptional score to Ys I & II Chronicles here. "Palace of Destruction" is exactly what fans who played the game back in 1987 could only dream of — a well-produced band performance offering a melodic focus, a gritty backing, and plenty of liberation during the solos. "Moat of Burnedbless" demonstrates an even harder edge to the score and verges on heavy metal. Finally, the band interpretation of "To Make the End of Battle" is full of rhythm and energy. It's still a great version of a fan favourite.

There is one final highlight among the bonus tracks. Ys I & II Best Sound Collection provided an exclusive insight into the now-released score for Ys SEVEN. The opening theme of the game, now known as "Innocent Primeval Breaker", was included. It reflects the sound of new Falcom quite well — blending rock elements with sonorous violin leads and some improvisations. In my opinion, it's not on par with classics such as "Genesis Beyond the Beginning", but it's still a charming introduction to the game.

The Ys I & II Best Sound Collection is a great compilation of arrangements from the series. All the favourite melodies are here in often fresh and exiting takes. Unlike preceding efforts like The Very Best of Ys, it comes together as a whole spectacularly well too. There are a lot of exclusives and semi-exclusives on this album too, particularly from the score of Ys I & II Complete. Though the Ys I & II Chronicles tracks were a little rock-heavy and the Ys SEVEN opener is unspectacular, these insights into the scores were still promising and welcome ones.

Comes with the PSP game Ys I & II Chronicles.