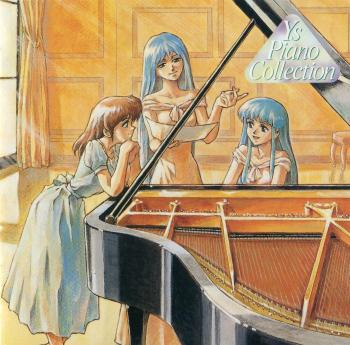 Given the popularity of Ys music, it came as no surprise when Falcom announced the first of two piano collections for the series' music. Falcom's new age mastermind Michio Fujisawa returned to both arrange and perform a selection of favourites, mainly from the first two games. While there are some highlights among the resulting collection, somewhere in the process Fujisawa grew uninspired and the final album is one of the weakest piano albums in game music.

The opening arrangement of "Feena" defines everything wrong with most soft game music piano arrangements. The right hand presents the original melody in a barely changed manner against diatonic arpeggios and chords from the left hand. The format is just so formulaic and the resultant texture is very dull. The performance is also unflattering, given Fujisawa is quite heavy-handed and shows little affect towards the original material. However, there is still an air of oversentimentality regardless, perhaps due to the laboured nature of the original melody. Several other arrangements also take this unsatisfying 'melody with accompaniment' approach. Though it has its lush moments, "Trading Village of Redmont" is still too straightforward and superficial overall, while a few mordents and decorations on "Too Full with Love" are too little to constitute a creative or rich arrangement. In fact, both would be on the lower end of the quality scale even among fan arrangements.

There are two arrangements created for piano and strings. "First Step Towards Wars" is thankfully a more creative and accomplished effort. It attempts to present the original overworld theme in the form of a late classical piano concerto, complete with synth 'orchestral' backing. The intricate arrangement made me real that the original piece has more depths that I originally thought, both in the form of dark turns and romantic peaks, and that is certainly no bad thing. However, it's a real pity that the full impact of the piece is limited by the artificial string synth and limited scope of the orchestration. Far less satisfying is the minimalistic interpretation of "Palace". While intended to recreate the atmosphere of the original, the backing pizzicato string motif simply sounds odd and is too heavily punctuated. I'll stick to the Ys Healing version any day.

"Fountain of Love" and "The Morning Grow" are the only interesting solo piano interpretations since they adopt a jazz focus. Both arrangements inspire a lot of relaxation with their loungey stylings and lush chord choices. The latter is especially compatible with the melody and draws out all that reflective element of Ys' ending. Unfortunately, the conclusion reverts back to the simplistic arrangements of the opener. While "Subterranean Canal" may have sufficed as a subtle interlude, the absolutely colourless balladic interpretation of "So Much For Today" ensures it builds up to nothing. "See You Again" brings the album round full circle with yet more slow lifeless interpretations of a once-fantastic melody against basic yet jarring chords. It seems any promise at the centre of the album was lost...

Overall, a very weak first outing for the Ys series on piano. It's not necessarily a bad thing when arrangements stay close to their originals, but it is when the arrangements suck the life out of the original melodies and sound decidedly amateurish. It's obvious that Michio Fujisawa is actually capable of producing very elegant arrangements since other albums (e.g. Perfect Collection, PrePrimer) feature excellent contributions by him. It's therefore frustrating that, either by producer's orders or some other reasons, he doesn't demonstrate this in this piano collection. The piano concertino and two jazz improvisations are certainly beautiful, but the rest of the album is just so creatively and emotionally unfulfilled. The sequel album isn't much better, but at least not as obviously flawed as this one.

Album was composed by Falcom Sound Team JDK and was released on September 22, 1993. Soundtrack consists of 10 tracks tracks with duration over about 40 minutes. Album was released by King Records.