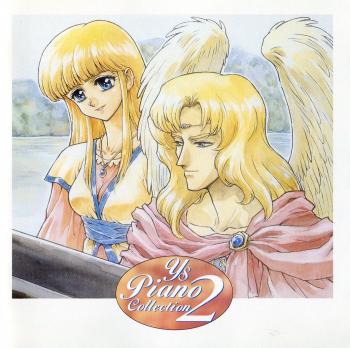 Michio Fujisawa received a second chance to present the music from the Ys series on piano in 1994. Once again, he decided to mainly stick to soft and simplistic interpretations of the music, instead of something more ambitious like his PrePrimer arrangements. The main problem with this second collection is not its amateurish quality, but rather its saminess. Let's take a closer look...

The opening arrangement of "Lilia" demonstrates little has changed in Michio Fujisawa's approach to piano arrangements. After some opening arpeggios, the mild-mannered melody from the original soon enters and is interpreted in a straightforward manner. The arrangement is hardly a bad one, since the melody has a rich shape and the harmonies are suitable, yet it lacks the ambition or heart of more impressive piano pieces out there. Certainly "Lilia" is among one of the more elegant tracks on the album and those others that feature fluid accompaniments are also welcome. "Celceta, the Great Forest", for instance, lifts listeners into quite a colourful journey with its gently ascending arpeggios and delicate melodies. A similar effect is achieved in "Crimson Wings" and it is one of the few interpretations as emotionally captivating as the original.

However, those tracks that have a more chordal accompaniment such as "Lefance" or "A New Beginning" tend to plod and drag. While the chords are straightforward, they feel harmonically too thick for the interpretations of the melodies. What's more, the slightly heavy-handed or at least uncaring performance by Michio Fujisawa gives an unpianistic quality to these pieces. I hate to imagine what would happen were an amateur pianist to interpret them. A particularly unpleasant example in this regard is "Tower of the Shadow of Death", which features a loud and brash performance of the original piece. Though it is a much-needed departure from the tedious soft pieces, it's not necessarily a welcome one.

There are moments of true beauty on this album, but they usually constitute transient sections of arrangements rather than full performances like the preceding album. For instance, it's wonderful how "Field" occasionally blooms from its formulaic 'melody + alberti bass' focus into sweeping passages such as at 0:52 and 2:01, or how "Wanderers from Ys" achieves fluidly builds a dramatic arch in a similar way. Likewise the core of "A Premonition = Styx =" is tedious with its slow presentation of the simple chord sequences from the original. However, it gradually gains a sense of direction, leading to beautiful passages such as from 1:45 with elegant ornamentation and brooding chord switches. It's a pity it soon reverts to an even more plodding version of the original melody.

The Ys Piano Collection 2 is rather similar to its predecessor in terms of arrangement. However, it's fortunately a much more refined production, offering sensitive melodic interpretations, flowing accompaniments, and some genuinely rich interludes. What is lacks is variety and the absence of classical concertinos, jazz improvisations, and other experiments hurt this album. What's left is a collection of straightforward soft interpretations that are competently arranged and performed, yet rarely spectacular. In bulk, the album becomes rather uninteresting and the few diversions from the formula are largely unsuccessful.

Album was composed by Falcom Sound Team JDK and was released on May 25, 1994. Soundtrack consists of 12 tracks tracks with duration over about 50 minutes. Album was released by King Records.