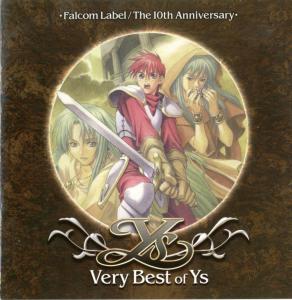 The Very Best of Ys was one of the final albums Falcom released through King Records after a decade-long collaboration. To commemorate the end of an era, Falcom decided to celebrate the diverse adaptations of Ys music released over the years with a best compilation album. Featuring everything from symphonies, rock bands, and vocalists, does it highlight the series' best and does it come together as a whole?

The album opens with an orchestral suite taken from Symphonic Ys. The suite features three of the most famous themes from Ys — "Feena", "First Step Towards Wars", and "Palace" — orchestrated by the late great Kentaro Haneda and performed by full orchestra. This eleven minute suite is a bloated introduction to the album, yet it is also a sublime one that reflects the deeper and dramatic elements of Ys. Another expansive suite is featured at the end of the album, dedicated to the sequel's "Lilia", performed by the London Symphony Orchestra. It's an excellent arrangement that helps to bring the album round full circle.

Ys is actually known for its rock adaptations more than its symphonic elements. Appropriately, the album commemorates this element with a selection of popular arrangements. Ryo Yonemitsu's acclaimed arrangements of "Palace of Destruction", "Tower of the Shadow of Death", and "Palace of Salmon" all make appearances from the Perfect Collection series and capture his straightforward mainstream-targeted sound. There are also two performances by the J.D.K. Band, namely their incredible take of "To Make the End of Battle" from their first album and the relatively straightforward adaptation of "Companile of Lane" featured in the series' anime adaptation. Hiroyuki Nanba's take on "Termination" is also extremely enjoyable and brings a progressive rock element to the experience.

There is a lot of diversity elsewhere in the experience. A beautiful piano adaptation of "Palace" is sandwiched between the rock arrangements and demonstrates the relative beauty of Michio Fujisawa's PrePrimer arrangements. Even the J.D.K. Dulk Factory make an appearance in one of the few good arrangements from Provincialism Ys, the gothic "The Last Moment of the Dark". Finally, there are three vocal performances. "The Morning Grow" is perhaps the most beautiful of these, offering Shoko Minami's uplifting vocals and atmospheric rock backing, though "Lilia" is a good contender with its piano-driven ballad approach. The album ends on a very sugary note with Shoko Minami's controversial, but potentially likeable, rendition of "See You Again".

The Very Best of Ys is a compilation of impressive arrangements from the series. Though it doesn't come together as a whole that well, what it does offer is plenty of diversity and many fan favourites. At the very least, it could serve as a useful introduction to the series' discography before listeners decide whether to want to branch out into symphonic performances, Perfect Collections, Preprimers, or Falcom's Vocal Collections. However, it might be a bad idea to buy this, since the enclosure album Ys I & II Best Sound Selection offers many of these arrangements and a lot more.