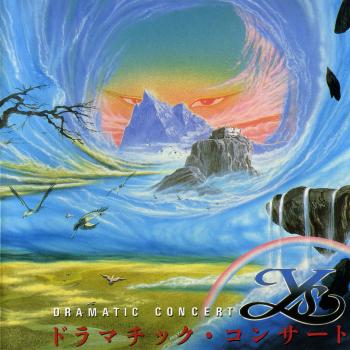 Ys Dramatic Concert is an arranged album that ties together both the game and animation adaptations of the Ys series. The album comprises of studio-recorded performances by three types of ensemble: a small symphony orchestra, a piano quintet, and a rock band. The resultant experience captures many of the melodies and emotions of the Ys series, but suffers too much from its diverse use of ensembles.

After a bold Wagnerian introduction, the opener "Ys" moves into a sedate interpretation of "Feena" featuring Michio Fujisawa's gentle string-focused orchestration. During the course of this programmatic seven minute arrangement, there are numerous dramatic developments. In particular, the final two minutes are among my favourites in the series' history — blending heroic march-like rhythms with the melancholic auras of "The Morning Grow". The rest of the orchestrations are mainly concerned with conveying intense action or emerging darkness, yet are quite well done, with the exception of the overly brassy "Tower of the Shadow of Death". Nevertheless, the finale orchestration of "First Step Towards Wars" is as charismatic as the opener with its Morricone influences and serene interludes. It inspires imagery of Adol dashing across the plains as the victor at the end of the journey.

A large portion of the album is dedicated to piano quintet performances. The first of these, "From the Town of Minea", is filled with the beautiful romanticisms and slavonic influences of Dvorak. It is one of several arrangements on the album based on the series' Heaven's Santuary anime adaptation. The piano quintet also do a much more well-known piece from the series, "Feena", justice. Though it isn't quite as gushing or colourful as the interpretation of Ys Healing, it compensates with its slightly eerie timbre and echoing effects. Other highlights include the intimate waltz-based interpretation of "Feel Blue", the brilliant classically-oriented "Goban's Theme", and the even more elegaic presentation of "The Morning Grow" at the end of the album. These chamber arrangements are undoubtedly the highlights of the album.

The band performances tend to jarringly break up the classical experience. The goofy fusion track "Dogi's Theme" and lame muzakal intermission are particularly unwelcome interruptions and are surprisingly short too. Others tracks such as "Battle Battle Battle" or "Go, Adol" rank as decent rock interpretations of Ys' climactic pieces and offer a slightly different sound to those of Ryo Yonemitsu or Tomohiko Kishimoto's arrangements. However, their production values are quite low — with outdated keyboards and tedious guitarists — so they are certainly a major break from the astonishing acoustic performances. The album would have come together as a more cohesive whole were the rock tracks just completed omitted, leaving still eleven wonderful orchestra and chamber arrangements.

It pains me to admit that the main problem with Ys Dramatic Concert is that it offers too much. The orchestrations and chamber arrangements on the disc are certainly compatible and work towards offering a dramatic collective work. However, the band arrangements are the weak link. Their inclusion was probably inspired by the dominance of rock pieces in the anime, yet they're a total misfit in terms of both musical style and production quality. What's left is a less satisfying collective experience than it should have been, but there are still bound to be arrangements that most listeners will enjoy. Those who already own the series' Healing and Symphony albums and want more should therefore consider purchasing this album. Maybe those prepared to ruthlessly press 'skip' or 'delete' will find it satisfying as a play-through too.


Here you can freely listen to preview tracks from Ys Dramatic Concert. Album was composed by Falcom Sound Team JDK and was released on May 21, 1991. Soundtrack consists of 17 tracks tracks with duration over about 55 minutes. Album was released by King Records.

Tracks preview provided by iTunes. If you like Ys Dramatic Concert, we strongly recommend to buy it. Support composers, artists and performers so they can release more music in the future. Prices and shops where you can buy it are at the right column.