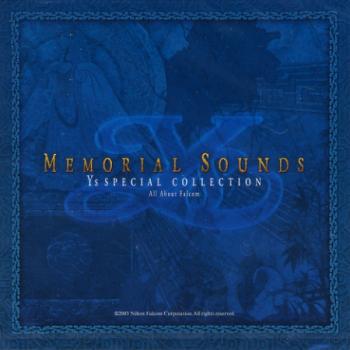 Ys Special Collection ~All About Falcom~ Memorial Sounds is a compilation of arranged music for the Ys series. The album features a wide range of music, ranging from rock to vocal to piano arrangements, that all attempt to present the emotions and melodies of the series' music in an appealing way. The resultant music an exclusive bonus with the Falcom Mailorder version of Ys VI: The Ark of Napishtim. How does this compilation stand up against others for the series?

The album gets straight to the rock with the arrangement of "To Make the End of Battle" from Music from Ys. It's a great way to capture the fun spirit of the series and Hiroyuki Nanba's interpretation is delightful too. Elsewhere on the album, there is a little Ryo Yonemitsu in his medley of the Darm Tower themes and more Nanba the form of an ethereal-turned-blistering interpretation of "First Step Towards Wars". However, the J.D.K. Band are most dominant here and are bound to delight listeners with their solo-heavy interpretations of "Legend of the Wind and "The Dawn of Ys".

Falcom chose to incorporate numerous vocal themes into this collection. This was a daring choice, since the company's vocal themes tend to divide fans, especially in the West. However, they are a surprisingly diverse bunch, ranging from new age interpretations of "Feena" to emotional ballads like "Somebody Loves You" to girly rock in "Victory!!". Oddly, "Dear Friends" and "Your Courage, Your Eyes, Your Tenderness" aren't from the Ys series at all, but rather Popful Mail and The Legend of Heroes III. I don't care as the former is catchy and the latter is one of the most beautiful on the disc.

Fortunately, there are also several acoustic renditions on the album. Previously compiled in The Very Best of Ys, the London Symphony Orchestra's ten minute performance of "Lilia" reappears at the start of the album. Elsewhere listeners are given a taste of Michio Fujisawa's sublime work on PrePrimer in "Mazurka" and one of his more fluid piano arrangements in "Celceta, the Great Forest". The album closes with the cinematic version of "Feena" created for Ys I Complete. It blends the famiiliar melodies of the original with a more organic flavour and a dramatic climax.

Ys Special Collection ~All About Falcom~ Memorial Sounds is a fine collection of arrangements. Most of the choices were good ones, even despite the vocal focus, and the album also serves as a good sampler. It's not quite on par with The Very Best of Ys or Ys I & II Best Sound Collection, however, so it's probably not worth seeking out a second-hand copy.

Track 15 is the only track on this cd that hasn't been released on any other album. And this cd was only available to those who pre-ordered the PC version of Ys VI through Falcom mailorder.
Album was composed by Ацуси Сиракава / Falcom Sound Team JDK / Миэко Исикава / Naoki Kaneda / Юдзо Косиро and was released on September 27, 2003. Soundtrack consists of 15 tracks tracks with duration over more than hour. Album was released by Falcom.