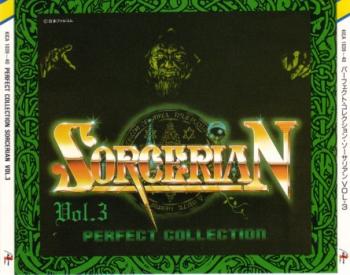 The Sorcerian Perfect Collections are, for the most part, pretty darn good. While they lack the power rock that is present throughout the Ys Perfect Collections, they make up for it with plenty of great synth arrangements. They will really grow on you if given the chance, as their takes on the original music can vary from dead-on-similar to unrecognizable. That said, Vol. 3 is easily the weakest in the series, although on its own, it's a decent album.

The best thing I can say about Disc One is that it maintains a very fast pace throughout. I would hesitate to classify it as rock, but it would teeter into that category. That said, don't expect Perfect Collection Ys all over again. Guitar solos are few and far between and most of the tracks fail to leave a lasting impression, as if the synthesizers are on auto-pilot. This album has a certain rushed feeling to it — some tracks could be longer, very little experimentation is done, and the whole thing is only about 40 minutes long. This may sound nitpicky, but as a fa. I'm disappointed the Sorcerian Perfect Collections don't redefine and immortalize the music as the Ys Perfect Collections do.

Now for the good stuff. Check out "Evil Shaman" for one of the best examples of Falcom rock you can hope to find. The synthesizers hit the closet and JDK busts out the guitars for one awesome boss theme. Too bad it's more of an exception than a rule. "Double Devils" brings this album's problems to light; it's the closest to "Evil Shaman" with guitar solos and fast paced synth, but it only runs a lousy minute and a half (and part of the half is so it can fade out in a peaceful tone). This piece deserved at least a two minute arrangement. "Medusa", "Underground Fortress", and "Fire Element" are all good high-powered synth arrangements. "Cavern II" is a nice adventuresome theme and "Forest" sounds like part of a Tom and Jerry cartoon with its whimsical sound. Last are the ending themes. "Ending I" is a slow piano-driven piece, while "Ending 2" relies on a playful beat to get through. Overall, not perfect, but a worthy listen once in a while.

Now we have the coaster... er, Disc Two. I don't like this disc at all. Most of the tracks have an unnerving slowness to them that strips them of their personality and makes them seem like a chore to listen to. A little tempo change would have gone a long way. The vocals contain some nice passages, but are fairly bland overall. "Endless Love Song" is a sweet take on the second ending theme. The new age tracks lost the guitar from Vol. 2 and revert back to their usual selves that I always flip over. The Super Arranges are a bit of a pick-me-up. The lone highlight of the CD, "Castle of Sand" starts off blistering, then slows into a piano groove, then returns to the fast beginning pace. The next two tracks lean more towards the techno side of things, but they still have that sticky slowness to them.

Finally, the Megamix turned out to be the biggest disappointment of all. It's little more than an eight minute version of "King Dragon" with a techno beat and electronic noises in the background. I'm guessing someone didn't tell Ryo they were putting the Super Arranged "King Dragon" right before it! I HATE that piece. Listen to the Disc One sample, then imagine it arranged for 12-minutes back-to-back! A poor effort from my favorite arranger. My sprite cans will always have a home on this disc.

Yet, with all of my complaints, this set gets a tough recommendation. It's still Sorcerian music and that's more than a lot of other soundtracks have going for them. Falcom or Sorcerian newbies should go with Sorcerian Forever II, which contains high-quality no-nonsense arrangements to get a better feel for these tracks, or the better Perfect Collection Sorcerian Vol. 1 or Vol. 2. Anyone familiar with either Sorcerian or Falcom should jump right in (and avoid Disc Two like the plague!). You'll probably need to go through Yahoo! Japan Auctions for it. Expect to pay around $30 for it (double that if you're buying in the American market). Often, sellers there sell combinations of the Perfect Collections in bundles, so try to hold out for a good deal.