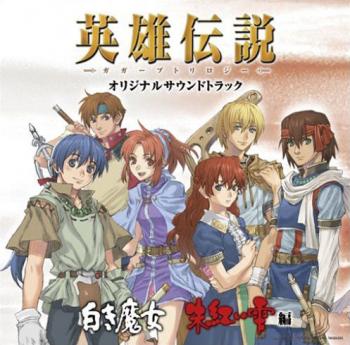 There are moments of brilliance scattered across this soundtrack selection. This is largely since the disc features many of the best themes from the original game score. Many of the favourite themes return, such as "The White Witch Gerud", "Little Heroes", and "In Memorial", in melodic arrangements. The diverse character of the original score is also maintained with everything from happy-go-lucky jingles (e.g. "Happy Comrades") to elegaic contemplations (e.g. "Sorrowful Melody") to gothic epics (e.g. "Lude Castle"). The disc still captures that feeling of innocent protagonists heading into a large fantasy world.

That said, there is an overwhelming feeling of emptiness across the release. There are numerous notable absences, ranging from "Durzel's Letter" to "The Great Battle of Bolt", that were definitive favourites in the full release. What's more, those themes that are present are often too brief. The orchestral interpretation of the opener "The White Witch Gerud" is dazzling, but cut short after 43 seconds. There is admittedly a small ensemble version of the theme in the centre of the soundtrack, but nothing quite as epic as the original score version. And don't even mention what happened to "Little Heroes"...

What's more, there is a great inconsistency in styles across this soundtrack. Sweeping orchestrations like "Let's Start, OK?" and "Scars of Galga" feature in some parts of the release. Yet completely tacky synth tracks like "Gidna" and "Feel So Good" are even more abundant. While diversity is always welcome, there doesn't seem to be a standard to expect for both arrangement and synth quality. It feels more like a random and uncoordinated collection of arrangements rather than a cohesive and faithful effort like the PC remake's score.

The album also features two adaptations of the opening theme added for the PSP remake. The original version of "The Other Side of Time" creates a feeling of innocence and expectation at the start of the main character's 'coming of age' experience. riya's vocals are a perfect complement for the game with their warm, light-hearted, yet unobtrusive character. Unfortunately, the theme is a half edit and consumers will have to buy the single to hear the full version. At the end of the soundtrack, it also receives an exclusive 'cuckool mix', featuring passionate flamenco guitar work. Note that the ending theme "To the End of the Sky" is also omitted from this release.

Frankly, I felt deceived by this release. It features so many omissions, lacks a cohesive feel, and is even sparing in terms of its theme songs. Whatever happened to rewarding those who fork out money with a proper and complete soundtrack release? I'd recommend people save their money for the two volume soundtrack for the PC remake instead. This features the definitive version of the game's music and features a much more cohesive and comprehensive presentation too.

Special Thanks to： Nihon Falcom、BANDAI
Album was composed by Falcom Sound Team JDK / riya (eufonius) and was released on May 25, 2005. Soundtrack consists of 31 tracks tracks with duration over more than hour. Album was released by Lantis.