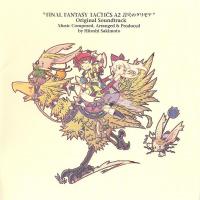 I'd like to say that I still remain somewhat enthusiastic about the whole Ivalice Alliance idea, despite the fact that it may well be just another hastily-realized effort by Square-Enix to feed on their budget hole of the Final Fantasy XII franchise. At least the two original games that came out (Final Fantasy XII: Revenant Wings and Final Fantasy Tactics A2: Grimoire of the Rift are still quite enjoyable; however, with Matsuno gone, I doubt whether Square-Enix is really serious about his legacy of Ivalice, and we may never see another masterpiece like Vagrant Story or Final Fantasy Tactics out of the franchise.

However, when we are talking about music, it's an entirely different matter altogether. Kawazu and co. are clever enough when they choose to call Hitoshi Sakimoto (and his now very profitable company Basiscape) to continue the music production of these games, in spite of the relatively low public opinion of the soundtrack of Final Fantasy XII (at least, "cannot compare to Uematsu's best output" is frequently heard when FF fans are talking about the music). I am very excited myself when hearing upon these news, but then a practical worry arises: with numerous output in these two years spanning 10 or so game projects, can Sakimoto really focus on the franchise that makes him popular back in the 90s?

Looking back, the answer would be yes and no, because they had different approach regarding the two projects. In the case of Final Fantasy XII: Revenant Wings, it is basically a catastrophe in my opinion. As this is virtually a sequel to the Final Fantasy XII, the development team chose to downgrade the music from the original game, trying to fit those complex pieces of music into the DS hardware. The fact is, even the PlayStation 2 has to use downgraded sound sources to deal with the music. In addition, the sound engineering is quite poor, so the result is hardly surprising.

Final Fantasy Tactics A2: Grimoire of the Rift is different, though. It's the sequel to Final Fantasy Tactics Advance and the feature of the world they explore is quite similar, yet they feature different characters and plots, so new themes and motifs are necessary. As a result, a large body of original composition is composed, accompanying arrangements from other Ivalice Alliance games by the Basiscape team. What made this title so special among Basiscape's 2007 efforts is that, in contrast to other projects, original pieces are mostly composed by Sakimoto himself, with Kaneda contributing only one piece. Now let us see whether Sakimoto can still retain his whimsical flavor of the original Final Fantasy Tactics Advance, and whether the arrangements are satisfactory or not.

The first original composition, "Putting Words Together", is a short but sweet piano solo rendition of the main theme. In my personal opinion, this may as well be the best theme Sakimoto has written in a long time. It is not only full-fledged compared to his recent offerings, but also full of young adventurers' spirit. As usual, this main theme is also featured in many variations throughout the game. For example, in "Unfold the Map", it is carried out by an Eastern-sounding exotic woodwind instrument accompanied by bagpipes. This weird combination may not be the cup of tea of a lot listeners, but it still works given the exotic, multi-race context of the game. Sakimoto's (and Iwata's) map theme efforts are mostly lacking in other games but he did this one right. "Premonition of Origin" sounds grandiose but still has the almost Disney-like childish humor. "Summer Vacation" offers little, in that it is nearly identical to "Premonition of Origin" minus the brass and percussion that makes the latter sounds much more interesting.

"Green Wind" did a good job in showing how Sakimoto-istic battle themes evolved in the last few years, yet it turns out to be a mixed bag for me. What's interesting to me in this piece is that it bears some resemblance to one of Sakimoto's earlier composition, "A Chapel" in Final Fantasy Tactics, with its syncopated pizzicato strings and percussion patterns. Yet in this piece Sakimoto added even more texture into this already dense piece. However, at the same time, it suffers quite a bit from the development, as the melody sounds forced. This has become a problem in many recent Sakimoto pieces it's not surprising any more. There're other examples in the same game, such as "Mad Dash!" which is even worse (the variation of Cid's theme here did not help either) and "Looming Crisis" which reuses chord progressions from Stella Deus and A.S.H. The worst examples should be the last two battle themes "Conclusion" and "The Unfolding Darkness". They sound trite, artificial, lack development, and are just way too loud. Strangely, with that being said I still love listening to them. I just hope that this approach to scoring be less emphasized in the future.

If I were to choose one, I think "Knowledge of the Adventurer" would be the best battle theme in the game. In the first part, the melody is in a higher key than the background accompaniment, giving an air of peculiarness. The second part is, as usual, Sakimoto's "building blocks" game, with instrument parts added to the loop one after another. It is still too short, though. Another great battle theme is "Being Unprepared is One's Greatest Foe" with its almost classical-sounding section starting from 0:33. Another good thing about this piece is that it also retains the playfulness that many other battle themes lack. It's not immediately obvious, but I think battle music in this game is not as playful as the original Final Fantasy Tactics Advance. They sound too serious. Perhaps not as serious as Final Fantasy XII, but still too serious. This over-seriousness problem appears in non-battle music as well. "A Hurried Guess" is a quirky little piece that is quite fun actually, but when I hear its beginning bars I feel uneasy. It's not only too loud, it also doesn't meld into the piece very well.

Character themes are generally great. Luso's theme, as shown in "Luso", is surprisingly simple but still fun. Like the main theme, it also appears in other pieces, especially towards the end of the album. The best rendition goes to "A Hymn for the Journey", as the theme feels quite natural on the banjo-like instrument. Cid and Adel's themes are fun as well. Listening to them makes me wonder why those battle themes need to be that serious, though. It's sad. Adel's theme also makes me wonder why Sakimoto doesn't use it anywhere else. Quieter tracks usually do not immediately grab my attention, so during multiple listening sessions I usually skip them, but there're still some outstanding selections in this album. "Signpost" sounds almost like music for dance and is quite heart-warming. "Comparison of Wisdom" is quite similar to "The World Starting to Move" in FFTA with its wicked playfulness. They are equally great, although I like the latter's instrumentations better. Also it's one of the rare occasion Sakimoto uses Uematsu's favorite keyboard instrument - the harpsichord, but Sakimoto's use is more human-like and less artificial here.

Kaneda's sole contribution to the album, "Front and Back", is also in authentic Kaneda style. It's emphasized in woodwinds, crystal clear string sections, and unusual percussion use. The ending piece is of great importance in any Sakimoto soundtracks, and this one is no exception either. "Words Put Together" puts the two main themes together and becomes a great work. Sakimoto expands the original Luso's theme into something bigger than everything else after 2:35 mark. After that, the music becomes even bigger with the main theme making its reappearance in 3:45 in a nearly-unrecognizable form. It just sounds so exciting! When the music calms down, the main theme appears again with a quite poetic ending in the end. Despite the ranting that I had above, I still think Sakimoto's original composition in this game is better than his other efforts in 2007. There are much less filler tracks and tracks are longer and with more substance, so I am still quite pleased.

Near half of the tracks featured in the game are arrangements of other Ivalice Alliance games. Given the nature of the arrangements this time I will spend less time talking about the individual tracks and focus on the approach the Basiscape team use. In fact, most of the arrangements cannot be called an arrangement at all, as the instrument parts are mostly the same. The differences are mainly dynamic variance between instrument parts and the occasional addition / deletion of parts. Some of the less obvious changes include "Companions That Surpassed Their Tribe" with a snare drum line resembling Kimihiro Abe's recent work and string countermelody in "At the Bar" that sounds like Kaneda's doing. However, in the case of "Into the Fantasy" the arranger changed the instrumentation, but didn't change much about the atmosphere associated with the piece. This is an occasion when the arrangement does things right. However, in some other cases it fails, such as "Beating Heart", in which the arranger completely ignored the intricate harmonies and the soul of the original piece.

All in all, I would say that the arrangements are no better than the originals most of the time. However, it may as well be just that I got used to the originals which provides more reverb, and I always liked Sakimoto's instrument samples. I would just listen to the originals instead, but completeness is always not bad for a game soundtrack, so it's still OK for me.

In sum, Final Fantasy Tactics A2 Grimoire of the Rift Original Soundtrack gave us little surprise. If you've played Final Fantasy Tactics Advance or listened to its soundtrack before, you know what to expect: the mature yet still playful side of Sakimoto's music. In these two to three years, Sakimoto's approach in orchestral music, especially instrumentation, didn't evolve much and I am quite worried about this. I just hope that Sakimoto not become like another Mitsuda or Uematsu who has run out of original ideas. I also have similar (and mixed) reactions with regard to his newest solo work — Valkyria Chronicles — but after seeing several episodes of The Tower of Druaga, I have regained some faith in him. Also I have high hopes for the two newer members in the Basiscape team — Kaneda and Abe — who has written some of the most fantastic video game music in 2007. Hopefully we will see more refreshing compositions coming out of Sakimoto and his studio.