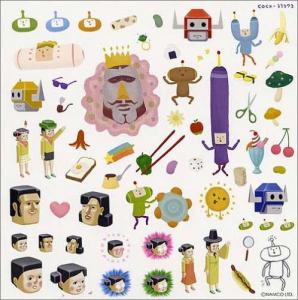 Katamari Wa Damacy is the official soundtrack to the second game of the Katamari series, We Love Katamari. Though the original composer Yu Miyake returned, there were a lot of other Namco and licensed artists that were credited in this soundtrack. Many shorter in-game scenario tracks were omitted from the album, which really should help make the album more solid. Being the sequel that it is, is it really possible to live up to a soundtrack that barely had anything wrong with it?

The first track is just an intro but it does its job of getting the listener hyped with a "we're back!" kind of feel. The second track is this fully a capella mix of the original theme. It's a pretty silly track and I couldn't imagine listening to much. Then we have the new official version of the theme, "Katamari on the Swing". As the title hints, the theme is now played in a swing style. It's certainly not bad, but I preferred the original rock style much more. This is how I feel about a lot of songs on the album actually.

The instrumentals are shorter in stock this time around. "Overture II" is simply an amazing jazzy piano take on the theme. It's a much fuller composition compared to the original "Overture". It's a very relaxed take on the theme and reminds me of a nice stroll on a slightly breezy autumn day. Of course, the overture is just a Katamari tradition; there are not many other tracks that have a simple piano sound like this.

"Blue Orb" follows in the steps of original Katamari instrumentals such as "Walking on a Star!" or "Angelic Gifts". Although I have liked these electronic sound bites incorporated in other themes, I feel this one is just a bit less memorable. It's also a bit harder to listen to and it almost hurts my ears. The track lightens up later and the vocal sounds help it immensely. "Beautiful Star" is the only other electronic instrumental on the album and it also doesn't really live up to the original tracks. I actually found this one to be a bit repetitive and boring, in comparison of course. Some of the vocal tracks make up for these though. I just wish there was some more electronic experimentation.

The J-rock/pop tracks are done just as well on this album. In fact, quality J-pop might be the one thing that surpasses the first album, though there are not very many J-pop tracks (at least in its pure form). "Everlasting Love" and "Baby Universe" stand out as some of the more catchy J-rock tracks and are right up there with "Lonely Rolling Star" from the original. They both stick with that slight electronic rock feel, but only slightly this time. I personally think it is odd when songs switch languages on and off like both of these ones do, but some might not mind. Both tracks could easily be radio tunes because they are just that catchy and they both make me want to sing along.

There are a lot of more laid-back tracks on this album. "Houston", "Heaven's Rain", "Katamari Holiday", and "Tsuyogari Katamari" all fall into this category. "Tsuyogari Katamari" is almost a bit milquetoast though it is still catchy. "Katamari Holiday" is quite silly, but it turns out to be a relaxing composition if given a chance. Like a lot of Katamari tunes, whatever genre is picked is usually excelled in. "Houston" and "Heaven's Rain" both sound very "flowery" and it makes sense because one of them is from a flower-based level. None of these vocal tracks really surpass the original album though.

I think "KuruKuru Rock" and "DISCO ? PRINCE" makes up for the large amount laid back tracks. Katamari Damacy is a game where it's nice to lay back and play it after a long hard day, but a bit of upbeat music doesn't ruin that idea at all. Both these tracks are more in the "hip-hop" genre. They are both pretty fun for what they are, though "KuruKuru Rock" is annoyingly prominent. There are some other creative tracks on this album that didn't exactly catch my ears. "Sunbaked Savannah" is creative in the fact that is a medley of all the original Katamari tunes using animal sounds only. It's barely memorable and it's more of track that I'd listen to once for he novelty and then never listen to again.

I don't understand "The Royal Academy of Katamari". It's a classical orchestrated piece and it feel extremely out of place. Whenever I heard these royal tunes on the original album, they fitted in with the game more. Although this track is still well composed and does feel pretty regal, it almost takes itself too seriously. I think the same thing would go for "A Song for the King of Kings". Some people that like a nice orchestrated theme might like these, but they simply don't work with the album and the game as much as they could and that is important.

Some of the criticisms were really just nit-picks because Katamari Wa Damacy still pretty much lives up to the original's reputation in the end. There are lots of great original compositions that fit with the concept. It's worth picking up if you liked the first one or if you are just curious and want a really fun and quirky album. And it is just as fun as quirky as the last. Yes, there are more flaws and it's a bit less memorable, but that doesn't really weigh it down too much in the end.

Katamari Suteki Damacy is the soundtrack for the fourth game in the quirky Katamari series. This is the first time that the Katamari series has not been on a Sony system. Instead, this game was shown to a whole new crowd of Xbox 360 owners. It's good they didn't cop out and reuse the old soundtracks like for the PSP predecessor. So maybe it has original music, but can this same style of music really hold up in a fourth bout?

There's some more decent J-pop like always, but again, it doesn't surpass the first two albums. If you liked the J-pop on the previous albums, then you'll at least be satisfied with tracks like "Into the Sky", "Guruguru Gravity", "Colorful Heart", "Boyfriend A Go Go", "Sayonara Rolling Star", "Harvest of Love", or "Katamarity"... wait, the majority of this album is J-pop this time around! I never could really call much of the J-pop horrible, but I wouldn't exactly want it to be the majority of the album. The original Katamari had some great humorous music and experimental electronic-organic hybrid music and, though it did J-pop well, they shined in the other styles too. If J-pop is the genre that we are mainly dealing with here, then you probably know if this album is right for you by know.

Despite the lack of diversity, these tracks fill in the big blank of vocal music that the last album really needed. They aren't exactly as catchy are old tracks like "Baby Universe" or "Lonely Rolling Star", but they definitely are the type that will grow on you. They also use the same sounding female voices as other Katamari soundtracks always have. If you liked them back in the old Katamari days, then you will like them now. "Into the Sky" and its partner "Intro the Sky" are the strongest and catchiest of all of them. They have a nice rock guitar groove going on and they are just classic Katamari J-pop. "GuruGuru Gravity" is great too with the electronic feel to the back up samples and the voices. It also grew a lot on me.

Another nice highlight is "Sayonare Rolling Star" which is kind of a follow up to the original "Lonely Rolling Star". It's a very sweet song and again, there is not too much to complain about when it comes to the J-pop on this album. Like on previous albums, the new version of the theme, "Katamari Dancing", just doesn't beat the original "Katamari on the Rocks". The theme is actually a whole new theme — there are no melody similarities like usual. And yes, it does have more of a dance feel to it, along with the track "Bless my Stars". These kinds of tracks are always fun in moderation and since these are the only two then it's okay with me.

There are a couple of tracks that I simply did not like and did not get the point of. "Danketsu" is a good example of one. The children voices ruin the track, and I could barely listen to the whole thing through. The voices are just so high pitched and they never sing, they just talk the whole time and never stop. Maybe they are saying something interesting, but it would be annoying whether I understood what they were saying or not. The instrumental tracks, rather than being neatly integrated with the vocal tracks, are this time clustered towards the end of the album. Nonetheless, there are highlights within such as "Katamari Planet" and "STAR! STAR! STAR!" that keep the quirkiness of the series alive.

By the fourth iteration, the series should have evolved more than it has and the same goes for the music of Beautiful Katamari soundtrack. It's not completely old yet, and there manages to be a lot of original worth on the album, but it certainly does not surpass the original or sequel in any way whatsoever. It's a bit underwhelming and there even starts to be some complete duds ("Danketsu" anyone?). Maybe this is a sign that the developers should be moving on to a new series or doing something to shake this one up before it actually DOES get old. It's still better than the majority of video game music out there and, if you happen to like J-pop, then I highly recommend it.