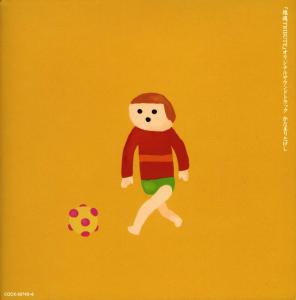 Katamari Damacy appealed to many people, myself included, for its humorous and innovative vocal soundtrack. Subsequent soundtracks in the series have maintained much the same sound, but have often lacked highlights and deviated from the indie approach in favour of a more mainstream sound. Fortunately, Katamari Forever back to the origins of the series, courtesy of the amnesiac mind of the King of All Cosmos. Under the direction of Yu Miyake, a team of arrangers and vocalists interpreted their favourite tunes from Katamari Damacy and successors to bring two discs worth of fresh, diverse, and often downright weird remixes. It's necessary to have some familiarity with the Katamari Damacy original score in the series to appreciate its remixed score. Regardless, the team offers more than enough material to at the very least get people talking. It's an interesting production, although not all remixes are for all.

Yu Miyake immediately sets a familiar tone with a short reprise of the main theme for Rhodes piano. The choice and use of instrument is spot on, given it creates just the right amount of sentimentality, while having an ethereal timbre appropriate for an amnesiac's mind. With "Katamari on the Wings", the theme returns in full force with easily my favourite of its arrangements. Takuya Ohashi's vocals bring out the humorous and infectious melody, while bringing out a slightly charismatic and romantic aura. The instrumentals are superbly done too with a blend of pop beats and big band jazz. Even the saxophone solo is surprisingly tolerable given how often the instrument is abused elsewhere in the industry. Later in the soundtrack, Sexy-Synthesizer also arranges this theme complete with ancient Namco sound effects. In each rendition, the arrangers clearly know how to bring out the personality and catchiness of Yu Miyake's original melody, while making daring and creative choices to reinvent the main theme after one too many uninspired remixes on earlier albums.

A more world-inspired entry is "Cherry Blossom Color Season". Blending Indian tonality with European orchestral instrumentation and Japanese female vocals, it shouldn't work, but it somehow does and fits elegantly within the Katamari world. Meanwhile "Katamari on the Funk" sounds even more novel than the original in Senor Coconut's mambo remix. Much of the theme is entirely instrumental, yet the live trumpets and saxophones bring so much vivaciousness, while the eventual entry of the Caribbean vocals provides one of many feel good moments in the scores. "Katamaresort" and "Bluffing Spirit" meanwhile inspire further relaxation by adopting bossa-nova styles. The former offers abstract imagery with its slightly dissonant acoustic guitar work and Saigenji's downbeat female vocals. However, "Bluffing Spirit" once again exudes that romantic tone with its male lead and colourful synthscaping. Talking of male leads, "Shadow and Light" brings the back the voice of Shigeru Matsuzaki for a heartfelt ballad. This sort of cheesy music would be difficult to market normally, but it works so well in the context of the Katamari world that it's a definitive entry here.

There are also some more electronically-oriented entries. "The Moon and the Prince (and LEOPALDON MIX)" is an obvious example with its stimulating beats and anthemic melodies inspired by the dance-pop movement. Yet the quirky attitude of the original is retained with its bizarre tongue-twisting rap sections. Not all will like it, but I think it is ridiculously fun regardless. "Galactic S-O-U-L" meanwhile provides one of the few psychologically dark tracks on the soundtrack, combining gothic J-Rock vocals with ever-elaborate breakbeats, though even this has some lighter moments. "Everlasting Love (atom remix)" takes electronic manipulation even further, but the beat-heavy rendition in "Everlasting Love + You Are Smart" is actually more catchy and faithful to the original. Also fascinating is the chiptune remix of "A Crimson Rose and a Gin Tonic". The vocals remain close to the original, yet the peppy 8-bit samples really bring a new cuteness and charm to it. The blend of male vocals and colourful samples in "Houston" is also wonderfully implemented and is faithful to the image of the original. Whether in-house or outsourced remixers, the musicians in Katamari Forever are highly skilled in electronic, orchestral, and world music creation and implementation alike. This album is yet another demonstration of the strength of the Namco sound team.

That said, not quite all the remixes were hits for me. Kimitaka Matsumae's "The Royal Academy of Katamari" is so out there with its warped and retro synth sounds. It's certainly creative, but a little too trippy for my tastes and not always kind on the ears. Others are pretty inspired, but could have been refined a bit more. For example, "Katamari on the Rocks (5cm Prince Remix)" features a fascinating blend of reggaeton vocals, old-school samples, and techno beats, yet verges on the repetitive. Meanwhile the blend of orchestral and retro samples on "Campus Daydreamer" could have been fantastic, but there are few too many obnoxious brass elements to really appeal to me. I was also disappointed that both remixes of "Lonely Rolling Star" — my personal favourite from the original soundtrack — took a relatively contemplative rather than peppy tone. Yuri's Mixx is a little more upbeat, but the pseudo-Engrish vocals here might be a select taste. Both are still pretty interesting interpretations and it mainly comes down to personal taste. Everyone will have their own favourites and dislikes here.

There are also a few instrumental tracks on the album. "Scorching Savanna" provides a performance of some of the series' classics by a high school brass band. While the arrangement varies in technical accomplishment, the final result is a very nostalgic and emotional tour of the series' music. Even more surprising is how the team have elaborated "You Are Smart" into a comprehensive ten minute remix. It actually deviates a great deal from the original material — with the vocoder just popping up then and again — and the core of the mix is some sublime jazz work. Of course, the fugues are back too with their silly synthesis. Towards the end of the album, the team bring out lots more chiptunes, vocoders, and minimalistic electronica with pieces such as "Green Village", "Katamari Dancing All Night", "Mushroom Parade", and "Cosmic Message". Some are a bit short, but they're a nice reflection of some popular underground music scenes in Japan. The second disc is faded out with a duo of eight minute remixes by Hardfloor, but both are quite repetitive and lack melodic substance. Nevertheless, "Last Chaotic Ambience" is pretty effective in closing out the game and album with its warped electronic sounds and voice effects. A fitting end to a bizarre journey.

The Katamari Forever soundtrack is intended to be additional to the original Katamari Damacy soundtrack. It really helps to have familiarity with the original pieces to see how the arrangers treated them. For the most part, they provided very fresh and creative takes that often differed completely in style and mood. Yet the album still retains the upbeat, humorous, and sentimental feel so important to the series' charm and the melodies are as clear as ever. Not all the remixes are likeable, but there is so much here that there is bound to be something for everyone. It's a very inspired remix albumthat is inspired in and out of context.