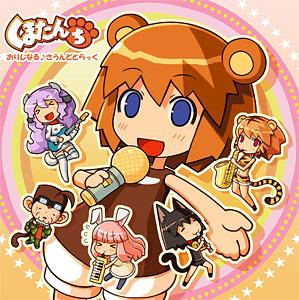 In 2008, Basiscape maintained their relationship with Odin Sphere developer Vanillaware on the DS title Kumatanchi. This Japan-only zoo simulation game didn't ignite commercial or critical interest, but its score nevertheless provided a highlight. Scored by the company's longest-serving 'junior' employees, Kimihiro Abe and Mitsuhiro Kaneda, it blended the game's youthful style with the composers' eccentricities. Clearly well-regarded by Basiscape, the score was the first album to be released by their new record label at the end of 2009. Could such an obscure game really yield sublime music?

The release is flanked by two extremely upbeat vocal themes. Kimihiro Abe's "Come Over to Kumatan's Zoo" captures the youthful exuberance of the game with childish vocals and hyperactive beats. While the main melody is quite memorable, Ryouki Ruou arguably kills the song with her screechy and immature vocals. Love or hate the vocals, the composition itself is quite respectable and the numerous twists and turns in the extensive development ensure it is less formulaic than most similarly styled songs out there. Most will find the vocals make it unlistenable, though... Mitsuhiro Kaneda's "Happy Sugar Days" is considerably more laid-back and benefits from considerably more restrained — if still poorly intonated and high-pitched — vocals. The real highlight here is again the instrumentals — comprising an elegant blend of spacey electronic beats and jazzy piano stylings — all of which are layered and integrated in the distinctive manner most have come to expect from Kaneda's works.

The majority of the instrumental tracks on the main portion of the soundtrack are less devleoped than the backing tracks of the songs, yet still display the same amount of creativity. Kimihiro Abe's "Main Theme" takes some time to get used to, due to its nasally recorder lead and slightly dissonant chord progressions. However, the melody is undeniably whistleable — salvaging the remnants of the opening song — and is fascinating in conjunction with Abe's distinctive rhythmical and harmonic approaches. "Kumatan" elaborates on the woodwind focus with its recorder, flute, and bagpipe leads, thereby capturing the innocent and organic quality of the game. Though not all will enjoy the instruments featured, the overall composition is delightful nonetheless and is reminiscent of the daring creativity Hitoshi Sakimoto displayed on Final Fantasy Tactics Advance. Another creative highlight is "Selection of Memories", which creates a bizarre timbre through its asynchronised and interweaving marimba and guitar lines. "The Encounter with Kumatan" meanwhile is an interesting twist on waltz clichés — managing to sound simultaneously romantic and childish — that benefits from a beautifully synthesised clarinet lead.

Kaneda's instrumental contributions on the album tend to reinforce the jazz influence. "At Daytime Outdoors" is the earliest example of his contributions and resembles the typical jazzy upbeat tracks found on dating simulators; of course, though, Kaneda again demonstrates Basiscape's flair for creativity with his ingenious use of a marimba lead and incorporation of some of his own harmonic trademarks. "At Nighttime Outdoors" meanwhile is a downbeat variation on the theme coated with sentimental strings and soft synthpads. Delving deeper into the album, Kaneda is also prepared to hybridise the score's distinctive instrumentation with sleazy funk rhythms in "Nekokun", comical brass leads in "Sister Ushi", and downbeat electronic grooves in "Sumomosan". While these lack the same depth of some of Kimihiro Abe's creations, they're still wonderfully stylised and full of character. Unfortunately, most of the second half of the soundtrack is dominated by fanfares and other short variations on the main theme. The composing duo still manage to round off the experience on a positive note with a warm semi-orchestrated ending theme, "Will Be With You", bridging together the various melodies and styles of the soundtrack for a definitive conclusion.

Kumatanchi's score reaffirms that, even on their minor projects, Basiscape are still capable of producing creative and accomplished musical scores. Kimihiro Abe and Mitsuhiro Kaneda manage to portray both the youthful and organic feeling of the game throughout their score, to delightful effect in context. The instrumental music is also highly enjoyable outside it, since the duo are able to curiously blend clichés with novel ideas, particularly in terms of timbre and harmony. The effect is reminiscent of Sakimoto's own Final Fantasy Tactics Advance, except less serious and more eccentric. Many will want to skip on this score in favour of Basiscape's major releases, since it is rather short and features two potentially unbearable vocal themes. However, others will find this score to be a modest yet fascinating addition to their collections.