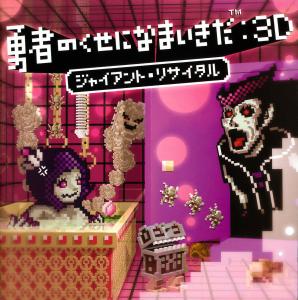 For the third title in the PSP series, Takeshi Hama had left noisycroak, so his former boss Hideki Sakamoto took over the composing reins for the series. Sakamoto had previously supervised performed for the series, but did not compose any pieces in the previous two titles. Additionally, Sakamoto arranges a few pieces that have become standbys in the series. He sticks with Hama's eccentric musical instrumentation, but adds some violin parts for a couple songs. How does Sakamoto fare in handling this series' music? Does he build upon Hama's work, or create something entirely new, and is the end product a worthwhile one?

The soundtrack gets off to a rollicking start with "The World in My Palm," a cheery introductory piece that sets the mood for the rest of the album: inspired by its formers and intending to complement them. The piece is lighthearted and features some nice overlapping melodies between the various members of the recorder ensemble. It's nothing unexpected after hearing the previous album, but a welcome return to the norm. "The Beginning is the Usual Dungeon" is a rather nostalgic sounding piece. A recorder duet plays a sad melody over a third recorder playing staccato notes, which then melds into some graceful, lengthy notes played by the keyboard harmonica. The whole ensemble is supported by an enjoyable march-like rhythm that complements it well. "This Dungeon is Superb" is far more uplifting due to its faster militaristic beat, though the melody, played by the recorder, is still somewhat mournful.

"Afternoon Hero," by contrast, is a nostalgic, mournful theme played by the recorder ensemble. There is some neat fluidity displayed by the keyboard harmonica ensemble and vibraphone as the piece picks up, in a quite enjoyable manner. The whole ensemble contributes quite nicely to this composition. "There is no Tomorrow for Heroes" sounds like tense, event music at first, with menacing chords, but soon opens into a more upbeat theme. The castanet is used to noteworthy effect here as well. The initial tense chord progression comes back by the end of the track, before it loops, but is meshed with the instrumentation developed throughout the track. It works quite well. There's a brief electronic movement in the background of "Although Pleased by Everyone" initially that sounds almost like Junya Nakano's work. It soon gives way to the main piece, curiously not a looped track. The piece does build up quite fluidly into a rambunctious yet fully enjoyable march. This track also marks the first instance of Sakamoto's sole addition to the classic series ensemble: the strings.

"For Example Just by the Demon Lord Not Being There" is a lonely piece, evocative of winter due to its somewhat sparse and light instrumentation, describing the lack of the demon lord's presence quite well. The vibraphone from the first half of "The Sleeping Demon Lord" almost sounds like it's taking a journey through the music, with its constant beat (gait) and changing pitch. "Love Triangle" is boisterous, in a good way. It's a very active piece that doesn't let up for a moment through changing keys and instrumentation. "The 'Dungeon'" has a very interesting percussion line that takes half the track to play out fully, full of various, different percussive sounds coming from each speaker over a simple, discordant chord played by an organ.

"Justice to Fear" is a bit obtrusive, as a bunch of instruments are playing their own melodies and clashing with one another, especially the loud percussion, but it works, somehow. It would aggravate if played on repeat, but as a prelude to the final battle track, it works in context and well enough on its own. "Final Gathering!" is not particularly noteworthy as a final battle track, but the strings are wonderfully pronounced, and, given their relative scarcity on the album, it allows their usage in this track to really shine. The piece is discordant and somewhat epic, but it is the strings, with their fluid rising and falling motions, that really makes this track special in its own way.

"World to Come" is almost annoyingly cheery at first, but the tune quickly changes key and becomes quite dark. The rolling motion in the strings helps this darker feel as well. It feels like the journey for our demon protagonist is not quite over, and there are still more villainous heroes on the horizon. The piece feels very lively and well composed. "A Slimemoss is Born" is a nice, quiet epilogue-like track used to close the album. It's a simple march that sounds much like the earlier tracks on the album thanks to the return of the typical instrumentation, though more subdued. It's somewhat hopeful as well. The CD closes with "Medley DE 8bit - All Displayed Famous Scene," a charming 8-bit arrangement of many of the tracks from the game. A neat little bonus item.

There are several tracks taken from the original two titles which Sakamoto arranged. He manages to easily breathe new life into these tracks, now a staple of the series. My personal favorite is still "Theme of Protecting the Demon Lord 3D," a track that never really needed an arrangement but does wonders provided with one.

Sakamoto infuses the typical ensemble with a new life in this soundtrack, creating a compilation of tracks that is marginally more enjoyable than those from the first two titles. The addition of strings was a brilliant choice to mesh with the classic ensemble without ruining its unique sound, by being used quite sparingly but to great effect. The tracks are all still very 'cutesy' and will easily turn off those without a penchant for the more bizarre, but for those who fully enjoyed the music from the first two titles, this soundtrack will be sure to delight