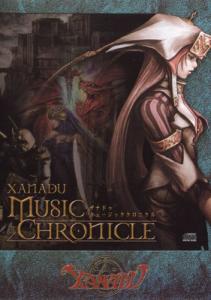 Xanadu Music Chronicle is a bonus album included with the PC version of Xanadu Next. It compiles arrangements of music from Xanadu, The Legend of Xanadu, and Xanadu Next, taken from often obscure sources such as Falcom's Special Boxes and CD Dramas. Were the arrangements well-selected or is this album not a good reflection on the Xanadu franchise?

The promotional album opens with an arrangement of the franchise's main theme "La Valse Pour Xanadu" from Xanadu Next. Dubiously, Falcom selected the modest field arrangement of the theme instead of the much more impressive orchestral opener. However, it's still quite pleasant with its dainty instrumentation and haunting melody. The other selection from the soundtrack is the vocal theme "White Lie in Black". This is quite different from mainstream J-Pop due to Ayako Shibazaki's whispering vocals and the haunting minimalistic instrumentals. While it could have been a very artistic achievement, the English pronunciation is often just too awkward to be enjoyed.

A large proportion of the album is dedicated to The Legend of Xanadu Super Arrange Version featured on the Falcom Special Box '94. "Prologue" is a very attractive opener, featuring Tamiya Terashima's fantasy-styled synthetic orchestration in conjunction with "La Valse Pour Xanadu". "Legend of the Wind" takes a different turn with a catchy light rock performance by J.D.K. Band. There are also two wonderful tracks from the M-Fujisawa Project, "Wings of Darkness" and "Silent Tower", that are considerably more upbeat than the usual piano quintet work most have come to expect from the group.

The album also features a number of other obscurities. There are two more versions of "La Valse Pour Xanadu", specifically David Matthews' sassy jazz fusion version from Falcom Special Box '89 and Michio Fujisawa's soothing strings and piano version from PrePrimer. Though neither fit the melody that well, they're still stylistically accomplished arrangements. While not my personal taste, it's wonderful that the sentimental vocal theme has now been released separately away from the drama album. It's also fascinating to hear two interpretations of the original image song "Xanadu" by Anthem and J.D.K. Band respectively. Anthem's version is too much like tame 80s metal to really appeal to me, but the J.D.K. Band version is full of energy and exuberance.

Xanadu Music Chronicle is a good album for collectors, since it compiles together a number of obscure tracks into one place. The arrangements from the The Legend of Xanadu Super Arrange Version are the biggest highlights, while the various vocal themes are bound to split opinion. Those looking for music from Xanadu Next itself, however, would be better sticking to the commercial soundtrack release Falcom intended.

Included with the Japanese release of Xanadu Next for the PC.

03. Legend of the Wind (from Falcom Special Box '94)
Arranged by Tomohiko Kishimoto
Performed by J.D.K. Band