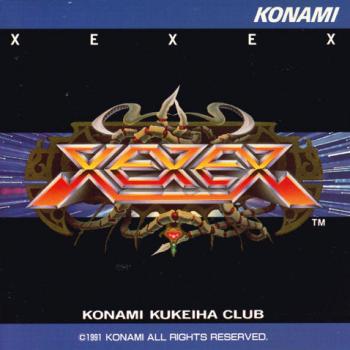 Konami is one company that has a few well known series of space shooters, like Gradius and Salamander. These games were given many soundtrack albums and arranged albums. Xexex is a lone game which was reputed to be a bit similar to Gradius and Salamander, but had features of its own. One of the more prominent features was a pod that the ship could use as a shield or weapon and could be thrown at the enemies. It was fairly reminiscent of the 'Force' pod from Irem's R-Type series. With this feature came others such as beautiful 2D graphics, fully voiced cutscenes, and a catchy synth-rock soundtrack. Get all these elements together, and you had a shooter which was ahead of its time in 1991 (a similar case would be Taito's Metal Black).

Who else could hand in this catchy score to than the founder of Konami's famous Kukeiha Club Motoaki Furukawa? Furukawa is reputed to be one of the best guitarists the game music world has known thus far. His ability to create catchy themes and implement well placed guitar riffs into his compositions only made Xexex's music all the better. The way the Xexex flows is that it has stage themes followed by short voiced tracks. Those are in Japanese and aren't of much interest unless you're fluent in the language.

Starting up the album is the opening theme "Battle Cry - All Hands to Station!". Barely a minute long, it still succeeds in impressing the listener with its advanced sound quality. The synth, guitar, and bass are all very clear from the get-go. It only gets better from here to the arranged themes, which I'll get to later. The stage themes are some of the most fun compositions in any shooter, and Xexex's don't disappoint.

The first stage theme "Breeze", starts off with a catchy rhythmic synth melody while the bass supports it. By the end of the loop, a roaring guitar riff is heard, which leaves nothing less than a huge smile on this listener's face. The 2nd stage theme, "With Zero G", sounds a lot like what you'd hear from a Gradius game. Not as "hyped up" as the previous stage theme, it proposes a slightly more relaxed atmosphere, although the occasional guitar riffs are welcome. One of the more remarkable themes is "Happy Daymare" used in the 6th stage. It's simply a happy theme, which seems to go against what it is supposed to portray. The synth melody is incredibly catchy for one; it could distract the player and cause an unwanted encounter with an enemy or a bullet.

The main boss theme for Xexex, "Boss Up!", consists of rapid drums and synth, the tone of the synth changes ever so slightly as the theme moves along. It's about 45 seconds per loop, but it does its job in pumping up the player to shoot madly at his opponent.Onward to the final boss theme titled "Black Eight Ball", which is pretty ferocious in its execution. The synth and bass create an unnerving tension, which is fitting as you do what's possible to stay alive.

The original score has much more to offer, but I feel that the arrangements are due to be discussed now. The arranged tracks are quite special on this album for various reasons. One of these is that Motoaki Furukawa displays some really nice guitar work on them. Another interesting point is Kenichiro Fukui's (credited as his Kukeiha Club nickname "Funiki Fukui") involvement on this album. Yes, this is the same Fukui that would later compose Einhänder for Squaresoft. He arranged "Breeze" with Motoaki Furukawa, who played the guitar while Fukui handled the synths and gave the theme justice. My personal favorite arrangement on the album is "Happy Daymare", arranged by Seiichi Fukami, with guitar by Furukawa once more. Furukawa transforms this happy piece into a laid-back guitar performance. It's strikingly similar to his works on his solo album "Sound Locomotive" and the universally praised "Salamander Pro Fusion" album. Furukawa fans should definitely check out this arrangement, if only for its smooth improvisation and overall "cool" sound.

The Xexex soundtrack has only good points, since the short voice tracks really don't matter in the end. It's certainly an interesting experience from Konami, and the arrangements should be reason enough to check out this amazing album.

Voice by: Sumi Shimamoto
Album was composed by A. Hashimoto) / Konami Kukeiha Club / Мотоаки Фурукава / S. Miyawaki and was released on January 21, 1992. Soundtrack consists of 35 tracks tracks with duration over about 50 minutes. Album was released by Konami.