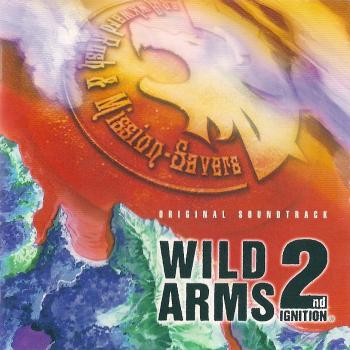 First things first: this soundtrack is not for everyone. In fact, I dare say that this soundtrack is not for most. The western atmosphere of the soundtrack takes its cue from the first Wild Arms, and manages to keep it up pretty strongly throughout, relying mostly on heavy usage of acoustic guitars, brass, and whistling. My God, the whistling is everywhere. If you've read my SaGa Frontier 2 review, you would know that I am big on a tune that can be whistled. I suppose now is the time to add the necessary corollary: I do the whistling, not the piece. However, Naruke takes many more freedoms with synths and other wacky sounds that sometimes detract from (or completely dispel) the "high-noon" feel of the game. Remember when I said that this soundtrack is not for everyone? It certainly was not for me.

That being said, I will cover the album on a disc-by-disc basis, as whoever organized the soundtrack was kind enough to break it up very systematically over two compact discs. The first CD is comprised of nearly every important incidental piece the game has to offer. The second CD contains, well, almost categorically poorly composed music for different story-related situations in the game. Fortunately, the second disc has a few diamonds in the rough worth mentioning. Unfortunately, the same has to be said for CD 1, which makes the entire soundtrack a handful of diamonds in the rough; not good for a sound track.

This CD holds nearly all of the dungeon, battle, overworld (or field), and town themes to be found on the album. A major beef of mine is the general length of each track. With a first disc containing a total of seventy-five tracks, you know that something was sacrificed. That something is a track length exceeding one minute. While a slight exaggeration, I feel safe in saying that all but a handful of pieces dare to clock in at over 90 whole seconds. This is a blessing for the majority of the pieces on the CD, due to their general lack of enjoyable sound and unimaginative arrangement. Alas, the few good tracks on the album are usually just as short as the other less desirable ones, ending just as the first loop begins, which makes enjoying them a choice between infinite loop and the dastardly chore of keeping your hand on that rewind button.

The first disc opens with the main theme of the game. It is presented agonizingly slowly, and with a forced sense of foreboding that is almost a tip-off to the suffering to come. Not at the hands of the game, mind you, but its accompanying background music. Here in the first theme we face what are two of my largest gripes about the Wild Arms 2 soundtrack in general. One I have just discussed. The other is that the main theme is literally 16 notes long. This would not be such a problem, unless, of course, you hear the main theme in what seems like every track in the game (which you do). At 16 notes, it certainly is not hard to slip it in here and there, and Michiko does so shamelessly, and to great (read: a greatly negative) effect. This also would not be so much an issue, but for the main theme being so unattractive in and of itself. Halfway through the first CD, I was able to predict exactly when and how the theme would turn up in any given piece with little trouble.

The intro FMV song, "You'll Never Be Alone No Matter Where You Go," while poorly named, is decent. The guitars are very well played, and accompanied by smooth brass, emotive strings, lilting woodwinds, and sweet vocals; it makes a nice introduction to adventure. I was certainly ready to save a world or two by the time it was over.

In general, all of the boss themes are strikingly boring, and fail to get across the idea that what you are fighting is any more threatening than standard fare. Of course, there is increased use of "evil" chording, dramatic hits, and darker sounding instrumentation, but it hardly serves its purpose. I must give credit where credit is due, as Naruke went to all the trouble of thinking up a theme for every major boss and dungeon, but it becomes obvious very soon that the quantity was gained at the loss of quality. You hardly notice this in game, because the piece that is playing during a boss fight is quite rarely the actual boss's theme piece. Those who have played the game will understand my meaning, but I cannot divulge more for risk of spoiling the story.

One notable exception to the dungeon generalization would be "Battle vs. Toka and Ge." This piece is undeniably goofy and clearly does not take itself seriously. Even so, I find it a much more interesting and original representation of faux-boss music. The cheesy Clint Eastwood meets Loony Tunes aspect of the piece is wonderful, although the use of the main theme feels forced. I wish that Michiko had taken this piece a few steps farther and thrown in a gunshot or two. Then I would have been sold.

Naruke's dungeon themes, on the other hand, are surprisingly gratifying. By and large, the pieces are catchy and make dungeon delving a fun experience. "Dungeon: Exploring 1," "Dungeon: Front Battle 2," and "Dungeon: Chapel," are a few of the upper-echelon tunes. The formula for her best dungeon pieces follows a common thread. First, establish an appealing lead riff. Next, drop a suitable and well-panned rhythm that solidly supports the riff and keeps it interesting. Lastly, expand on the riff with counter-melodies and alternating instrumentation that carry you all the way back to the beginning of the piece. Somehow, this all takes place in the short span of one minute, which is impressive, if a bit frustrating, because it always leaves you wanting more.

The town and field pieces are satisfactory, but far from remarkable in any sense. They get their respective messages across with little trouble, and with little else to keep the listener engaged. From a backwater village to a regal castle-fortress, the ideas are cut-and-dry, as is the instrumentation, on the whole. "A Blow in the Wind" was the one tune that I got a kick out of. It has some real feeling in it, starting with an aggressive drum fill and some string stabs that lead into an excellently syncopated bass synth. A sucker for rhythm to the end, I could not ignore this piece. The variation on the main theme was even remarkable enough to the point that I had no problem whistling along with the lead instrument (which just so happened to be a whistle). I must say that I liked the section which immediately followed that replaced the whistle with another synth. The piece continues into a crescendo that leaves you feeling quite good about the music you have just enjoyed.

If disc 1 was the good and the bad, Disc Two is simply ugly. The intro piece, "Resistance Line," is a mixture between an old western pub toe-tapper, salsa, and J-pop. The idea was nice, but the execution is depressing. The track is everywhere at once, and none of those places are anywhere I would ever want to be. The overdramatic vocals are equally unattractive, and the punchy brass comes in so infrequently you have to wonder why they included it at all. It fails to add any flair, and just seems to clutter the rest of the already woefully misguided piece.

Disc Two then embarks upon a long and stormy journey of aural pain and suffering until the very last few tracks. The pieces are incredibly short, incredibly ambient, or just incredibly boring. Often, it is some combination of the two. However, I promised ye a few diamonds, and diamonds ye shall have. "Thinking on a Sentiment" is a very touching piece. It is comprised of one solo guitar and that incorrigible whistler coming together to create what is probably the best variation on the main theme to be found on the entire album.

"Zephyrs' Theme," which is the ending piece for Disc Two, came as a bit of a surprise. It begins with a strange whiny pad and jazz guitar, which definitely caught my attention. The piece soon jumps into an impressive smooth jazz/funk style that this reviewer took quite well to. Of course, no good things last forever, as this piece demonstrates firmly when the vocals enter. They are completely out of place in the context of the piece, turning it into something along the lines of a bad lounge tune. Whenever she stops singing, however, my opinion of the piece takes off. There is a wonderful electric piano solo and some great brass hits that remind me of something from Sonic 3D Blast (which, if you did not know, is a very, very good thing). Overall, this is a good track with vocalization problems that keep it from being great.

"8 Track Arranged Medley" also deserves some appreciation. The first 5 minutes of the former track are filled with mind-numbing bell, woodwind, and string work, but the patient listener is definitely in for a treat when that clock hits 4:53. For that is when a wonderful acoustic bass and piano enter in with what has to be the cutest chording I have heard in a long time. Mr. Whistles is quick to chime in with the lead, backed up by the same piano and what is most likely the only xylophone solo I have ever heard that I liked. Later in the tune we are blessed with a bit of call-and-response between the piano and xylophone that made me go "aww" in appreciation for the completely cheesy yet irresistible cuteness of it all. Directly after follows some perky guitar which is soon joined by strings. Brass joins quickly after that, and the piece carries on in this very relaxing and enjoyable vein for another couple of minutes before it is all lost in favor of some more of those accursed bells.

Skipping past that section, we arrive at somewhere around 12:00 in the piece, and face an arrangement of "Field: The Barren Lands." This is an excellent reprisal of the more pleasant of the field tunes, although it does not last long. What follows after can only be described as the most annoying transition ever into what is actually a very lovely closing to this 16 minute epic. Steady arpeggiating guitar and a pan flute return to the previous field theme, ending on a sweet note.

The "Wild Arms Medley" is a fully orchestrated arrangement of several of the album's tracks. The presence of real instruments did wonders for the many themes, along with generally excellent arrangement. Somehow, this orchestra manages to turn even the blandest of Naruke's boss themes into an enjoyable piece of music. This track, along with parts of the "8 Track Arranged Medley" and "Zephyrs' Theme" are the only reasons to ever listen to the second disc.

Naruke plays a dangerous game of hit and miss with Wild Arms 2. While her hits are few, they are also not that amazing, which makes her misses seem less like complete mistakes and her hits seem more like better-disguised mistakes. Perhaps I'm a bit too harsh, but I see so much potential in the album that fell flat on its face due to poor execution that I find it hard to still my tongue. Granted, there are definite successes on this album, but they are so far and in between that you would probably be better off never buying the album in the first place.