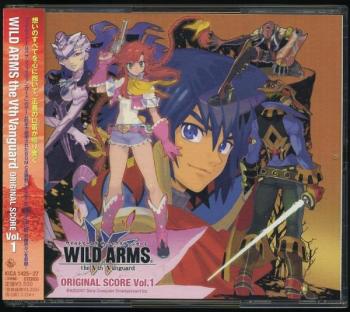 Wild Arms without Michiko Naruke? Yes, for the fifth main instalment of the series, Naruke indefinitely departed the series as a composer. She was replaced by Masato Kouda, former Capcom composer known for his work on Wild Arms 4, Monster Hunter, and The Star Onions, and Noriyasu Agematsu, founder of Elements Garden best known for his J-Pop songs and bishoujo game work. They both introduce their own stylistic elements to Wild Arms the Vth Vanguard while preserving the series' western sound. The soundtracks were controversially split into two volumes to help listeners to digest them and increase profit margins, resulting in six discs of music altogether. Nevertheless, the two soundtracks are largely continuous and this review will analyse them as a collective whole.

While Michiko Naruke departed the series on Wild Arms the Vth Vanguard, both composers were clearly inspired by her offerings to earlier soundtracks in the series. Right from the opening theme "The Vth Vanguard" — with its bold transition from a introspective flute solo to a punchy orchestral anthem — it's clear that the Wild Western flavour and exuberant spirit of the series' music lives on. Noriyasu Agematsu builds on these foundations with delightfully named tracks such as "On the Day the Shovel Was Named Invincible" and "A Boy Meets A Girl and ARMs", both featuring featuring the series' defining whistling solos in a slightly more pop-inspired environment. Even more spectacular is "The Dry Wind Blows Over", which exceeds even Naruke's greatest with its exciting orchestration and flamenco tinges. Perhaps the most definitive highlights, however, are the two versions of "When the Heart Ignites". They're bright, bombastic, elaborate, and very catchy. What's not to love?

Masato Kouda's contributions to Wild Arms the Vth Vanguard tend to take a more understated acoustic approach and thus complement Agematsu's more anthemic pieces well. "The Place I'll Return to Someday" perfectly captures the feel of the hero's town with its nostalgic harmonica leads and simple guitar-based accompaniment. The world map theme "A Vast Plain Under The Sky" meanwhile has a more expansive feel, combining an upbeat trumpet primary melody, calming harmonica secondary melody, and some off-kilter guitar and banjo accompaniment. Kouda also contributes a number of more jazz-inspired pieces, such as "Even a Dog Wouldn't Eat This", "An Encounter in the Sunset", and "I Still Have Something to Tell You". They're not among the greatest highlights, but are still quite charming and integrate effectively into the soundtrack. Another clear highlight is "Words of Memories Riding on the Wind", featured towards the end of the soundtrack, since it blends many of the features of earlier western-influenced pieces to accompany a reflective journey.

While the core of the soundtrack has an upbeat tone, there are many compositions that evoke deeper emotions. The most prominent of these is "The Ice Queen", used to represent Avril, featuring mispronounced semi-operatic vocals against soft harp arpeggios in its usual forms. While the core material is quite emotional, it also comes across somewhat sappy and shallow. Like a number of compositions on the soundtrack, this track receives a few too many variations too. Far more impressive are instrumental tracks such as "Nothing is Better than the Usual Time", "A Rusted Scar", and "Goodbye and Hello". The latter, in particular, captures a great sense of longing with its gorgeous trumpet solo and sentimental backing strings. Also very special are slow-developing tracks such as "A Dark World Looming Behind" and "The Stars Shine Like the Unwavering Flame" with their rich, bittersweet ambient soundscapes. The electric piano solo "Only Because It's Important Does It Easily Break" and string quartet "A Distant Elegy" are also astonishingly beautiful despite their derivative qualities.

Though the core of the soundtrack stays close to series' tradition, both composers demonstrate their willingness to push stylistic boundaries elsewhere. After the consonant orchestral approach of his setting themes, it is somewhat shocking to hear Noriyasu Agematsu create an absolutely abrasive heavy metal theme for "Kartikeya ASGX_7135", one of several boss battle themes on the soundtrack. The battle themes for "Elvis" and "Persephone" meanwhile are impressive for the way they cleverly transition from introductory event tracks to rather different battle themes. The anthemic trance sound of Persephone's battle theme is a particularly shocking deviation from the classically-oriented appearance theme. "Golem Crash" meanwhile fuses jazz, rock, and electronic elements together in the way Kouda has always done best, resulting in a particularly rhythmically compelling action theme. Other anomalies range from authentic classical imitations like "Small Step Towards a Big Dream", to the cheesy funk stylings of "The Fallen Idol", to even a endearing chiptune tribute to Naruke among the bonus tracks.

While it takes a while to arrive, the climax of Wild Arms the Vth Vanguard's soundtrack is an impressive one. Following earlier variations in the gothic organ-based exposition "Falling into the Shadow of Locus Solus" and dark fantasy orchestration "One Day You'll Forget the Hopes and Dreams", Kouda offers a fully fleshed version of the antagonist theme on "Volsung XERD_3133". Arguably his magnum opus of the soundtrack, it cohesively blends so many different elements to provide an absolutely chilling whole. The actual final boss theme, however, is surprisingly a J-Pop vocal theme entitled "Justice to Believe". Combining Nana Mizuki's spirited voice, Noriyasu Agematsu's exceptionally colourful pop-orchestral accompaniment, and nearly nearly seven minutes of development, it works surprisingly well during the abstract battle scene. It's also wonderful how the melody is introduced earlier in the soundtrack before its fully-fleshed rendition here. Mizuki also closes the album with the similarly elating ending theme "Crystal Letter", another refreshing departure from RPG standards with much depth and elaboration.

Evidently, Wild Arms the Vth Vanguard's soundtrack survived admirably without Michiko Naruke. Masato Kouda and Noriyasu Agematsu were able to continue the Wild Western style of the series with this soundtrack, while pushing new ground with their more elaborate and better implemented compositions. Furthermore, they create easily the most diverse Wild Arms score to date, which ensures the six disc listen is continually entertaining. Admittedly, there is the occasional filler cue or superfluous theme variation, but the sheer majority of the content here is outstanding. With over 100 tracks featured between the two volumes, the soundtrack has a lot to offer and deserves to be part of most people's collections.